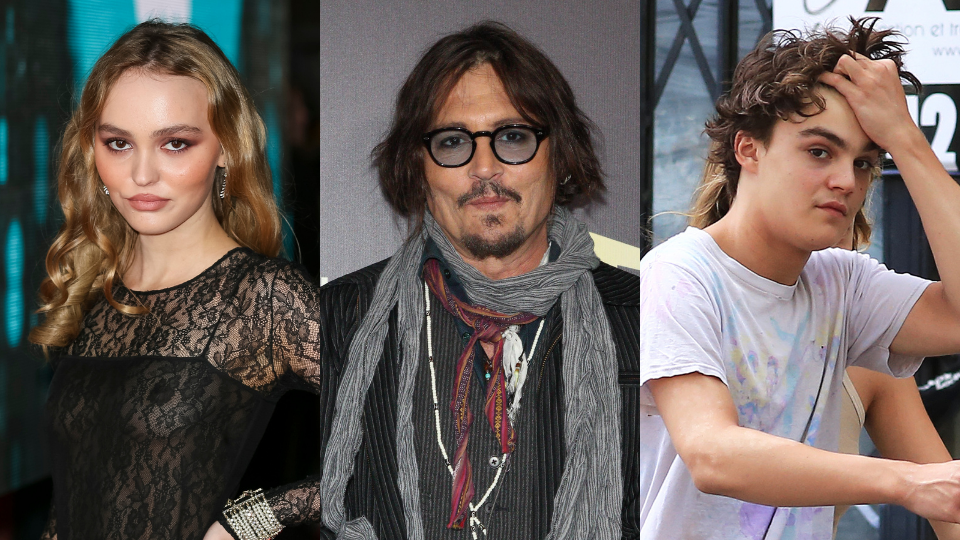 Throughout the years, Johnny Depp’s kids have always been at the top of his mind — whether he was busy acting as the swashbuckling Jack Sparrow in Pirates of the Caribbean or caught up in headlines following his divorce from Aquaman star, Amber Heard.

The Golden Globe-winning actor, who is also known for his roles in the Fantastic Beasts franchise, Edward Scissorhands and the 2005 remake of Charlie and the Chocolate Factory, shares two children with his ex-girlfriend Vanessa Paradis, whom he dated from 1998 to 2012. Depp has spoken fondly about his kids many times in the past. In a 2013 interview with Rolling Stone, the actor revealed, “With my kids, they’re told 75 times a day that they’re loved. One thing I know is they feel loved and secure and happy and needed and necessary and a part of something. ”

Depp has also expressed his desire to make his kids proud: “I’m just an actor, and if I can leave something behind that my kids will be proud of, then that’s what I want,” he told the Daily Telegraph newspaper in 2009 , adding at the time, “I do not want my kids to be embarrassed by anything I’ve done.” But over a decade later, the actor inevitably found himself in this exact situation when actress Amber Heard accused him of physical and verbal abuse during their marriage.

Heard, who married Depp in 2015 after several years of dating, filed for divorce and obtained a restraining order against the actor in 2016. The divorce was finalized in 2017 after the former couple reached an out-of-court settlement, of which Heard received $ 7 million and donated to charity. The following year, however, Heard penned an op-ed in the Washington Post, where she wrote about her experience as a survivor of domestic abuse. While the Pineapple Express actress did not mention Depp by name in the article, the clear consensus was that her article was about their relationship. Depp would go on to file a $ 50 million defamation suit against Heard in the United States, claiming that Heard’s allegations were false and libelous. The actor also sued the publishers of British newspaper The Sun. in a related libel suit after the paper published an article calling him a “wife-beater.” However, British courts ruled that Depp lost this case in November 2020.

During his US defamation trial in 2022, Depp expressed a desire to “clear” his name — not only for himself, but for his two children. “It was a complete shock,” Depp said during his testimony, reflecting on Heard’s allegations. “It just did not need to go in that direction as nothing of the kind had ever happened. In the relationship, there were arguments and things of that nature, but never did I myself reach the point of striking Ms. Heard in any way, nor have I ever struck any woman in my life. ”

“The news of her accusations had sort of permeated the industry and then made its way through media and social media became quite a global, let’s say, ‘fact,’ if you will,” Depp added during his testimony. “Since I knew there was no truth to it whatsoever, I felt it my responsibility to stand up, not only for myself in that instance, but stand up for my children.” Depp continued, “It just kept multiplying, it just kept getting bigger and bigger,” insisting, “I wanted to clear my children of this horrid thing they were having to read about their father, which was untrue.”

Johnny Depp’s daughter, Lily-Rose Depp, is his eldest child with ex Vanessa Paradis. Lily-Rose was born on May 27, 1999, in her mother’s home country of France. Like her dad, Lily-Rose has a knack for the spotlight. She began pursuing acting from an early age, starring in the 2014 comedy horror movie Tusk alongside her father. In the years since, Lily-Rose has starred in a number of films, including the period dramas like 2016’s The Dancer, in which she played Isadora Duncan, and 2019’s The King, where she starred opposite her then-boyfriend Timothee Chalamet. Aside from her acting credits on screen, Lily-Rose has also made a name for herself as a model, working with brands like Chanel throughout the years.

While Lily-Rose has never commented on her father’s trial directly, the young star did hint at what she made of the allegations during an interview in 2021. “You can not be perfect all the time. Nobody’s perfect. Period, ”she said. “I think that’s just the fact of life. But I think a big part of keeping a good head on your shoulders is just having a lot of self-awareness and never feeling like you take yourself too seriously to put your actions back into question. ” The model went on to neither confirm nor deny if she had plans to work with her father in the future: “Never say never,” she offered at the time.

Depp, for his part, has always expressed a special fondness for his firstborn. “Lily’s really together, she’s a sharp kid and one of the smartest human beings I’ve ever met,” he told the Daily Mail in 2015. “Whatever she’s doing, if she needs any advice, I’m there for her. Kids are going to make their own decisions, but I guess that the only thing you can do as a parent is to offer support. And I do. ”

Jack Depp is Johnny Depp’s youngest child and only son with Vanessa Paradis. Jack, who was born John Christopher Depp II on April 9, 2002, is not nearly as much in the spotlight as his older sister Lily-Rose. On the rare occasions when he’s been spotted out, however, there’s no mistaking that Jack is his father’s son as he bears a striking resemblance to his dad.

While Jack is not following in his father’s footsteps as an actor, he has special talents of his own. “My boy Jack, has always been a very talented draftsman,” Johnny told the Philippine Daily Inquirer in 2014. “He draws really super well. He also plays music very well. He’s got a good feel for that. Aside from school plays and things, he has not shown any desire to become an actor. Whew. ”

Four years later, Johnny expressed sympathy for his son for having to deal with public scrutiny after allegations of domestic abuse were first levied against his dad by Amber Heard. “I’m sure it was not easy for my 14-year-old boy to go to school; you know what I mean? ” the Pirates of the Caribbean alum told GQ in 2018. “With people going, ‘Hey, look at this magazine, man. What, your dad beats up chicks or something? ‘ Why did he have to go through that? Why did my daughter have to go through that? ” Depp questioned at the time.

Our mission at STYLECASTER is to bring style to the people, and we only feature products we think you’ll love as much as we do. Please note that if you purchase something by clicking on a link within this story, we may receive a small commission from the sale.