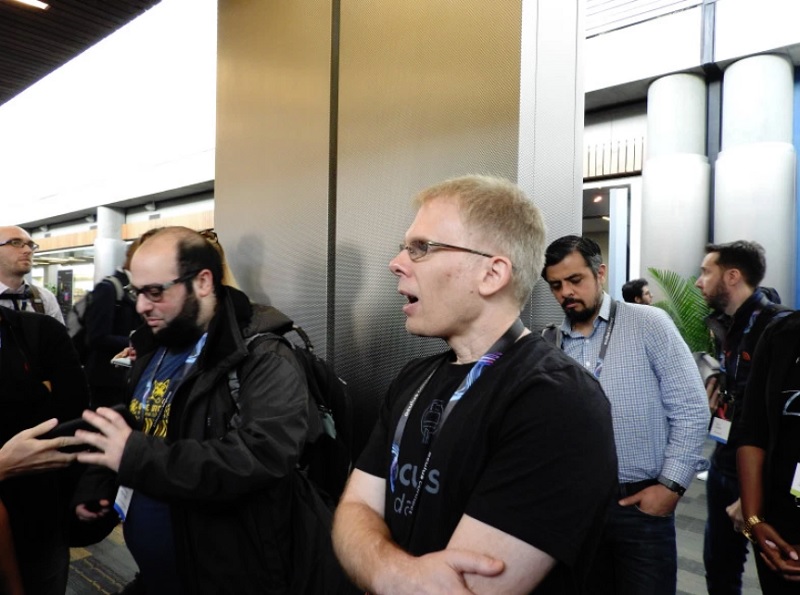 Connect with gaming and metaverse leaders online at GamesBeat Summit: Into the Metaverse 3 this February 1-2. Register here.

John Carmack, the programmer who brought us Doom and Quake and Oculus/Meta virtual reality products, has resigned from his executive consultant post for virtual reality at Meta.

In a post to employees, Carmack said, “This is the end of my decade in VR. I have mixed feelings.”

Carmack joined the VR team at Oculus in 2013, resigning from his job at Bethesda’s id Software and shifting from traditional games to VR. He continued on after then-Facebook acquired Oculus for $4 billion in 2014. In 2019, he stepped down from the CTO role at Oculus for the consulting role.

“Quest 2 is almost exactly what I wanted to see from the beginning — mobile hardware, inside out tracking, optional PC streaming, 4K (ish) screen, cost effective,” he wrote. “Despite all the complaints I have about our software, millions of people are still getting value out of it. We have a good product. It is successful, and successful products make the world a better place. It all could have happened a bit faster and been going better if different decisions had been made, but we built something pretty close to the right thing.”

He said the issue was the company’s efficiency. He said that an organization that has only known inefficiency is “ill prepared for the inevitable competition and or belt tightening, but really, it is the more personal pain of seeing a 5% GPU utilization number in production. I am offended by it.” (In a LinkedIn post, Carmack said he was being “overly poetic here.”

GamesBeat Summit: Into the Metaverse 3

Join the GamesBeat community online, February 1-2, to examine the findings and emerging trends within the metaverse.

Carmack said, “We have a ridiculous amount of people and resources, but we constantly self-sabotage and squander effort. There is no way to sugar coat this; I think our organization is operating at half the effectiveness that would make me happy. Some may scoff and contend we are doing just fine, but others will laugh and say ‘Half? Ha! I’m at quarter efficiency!”

He said this was a struggle for him, and even though he has a voice at the highest level, he feels like he should have been able to move things along. He said he has “never been able to kill stupid things before they cause damage, or set a direction and have a team actually stick to it.” He called this self-inflicted, as he never did move to Menlo Park where Meta is based. But he said he was busy programming and probably would have lost leadership battles anyway.

“Enough complaining,” he said. “I wearied of the fight and have my own startup to run, but the fight is still winnable! VR can bring value to most of the people in the world, and no company is better positioned to do it than Meta. Maybe it actually is possible to get there by just plowing ahead with current practices, but there is plenty of room for improvement.”

Back in August, Carmack tweeted that his Keen Technologies had raised $20 million. Meta CTO Andrew “Boz” Bosworth thanked Carmack for his work in a tweet.

Carmack often criticized his bosses in internal and external communications. And he also often blasted Bethesda’s owner ZeniMax Media, which acquired id Software in 2009. ZeniMax and id sued Oculus and Oculus founder Palmer Luckey in 2014 for allegedly misappropriating trade secrets, and the complaint called out Carmack’s role helping Oculus while he was still working for ZeniMax. The lawsuit was settled in 2018.

GamesBeat’s creed when covering the game industry is “where passion meets business.” What does this mean? We want to tell you how the news matters to you — not just as a decision-maker at a game studio, but also as a fan of games. Whether you read our articles, listen to our podcasts, or watch our videos, GamesBeat will help you learn about the industry and enjoy engaging with it. Discover our Briefings.