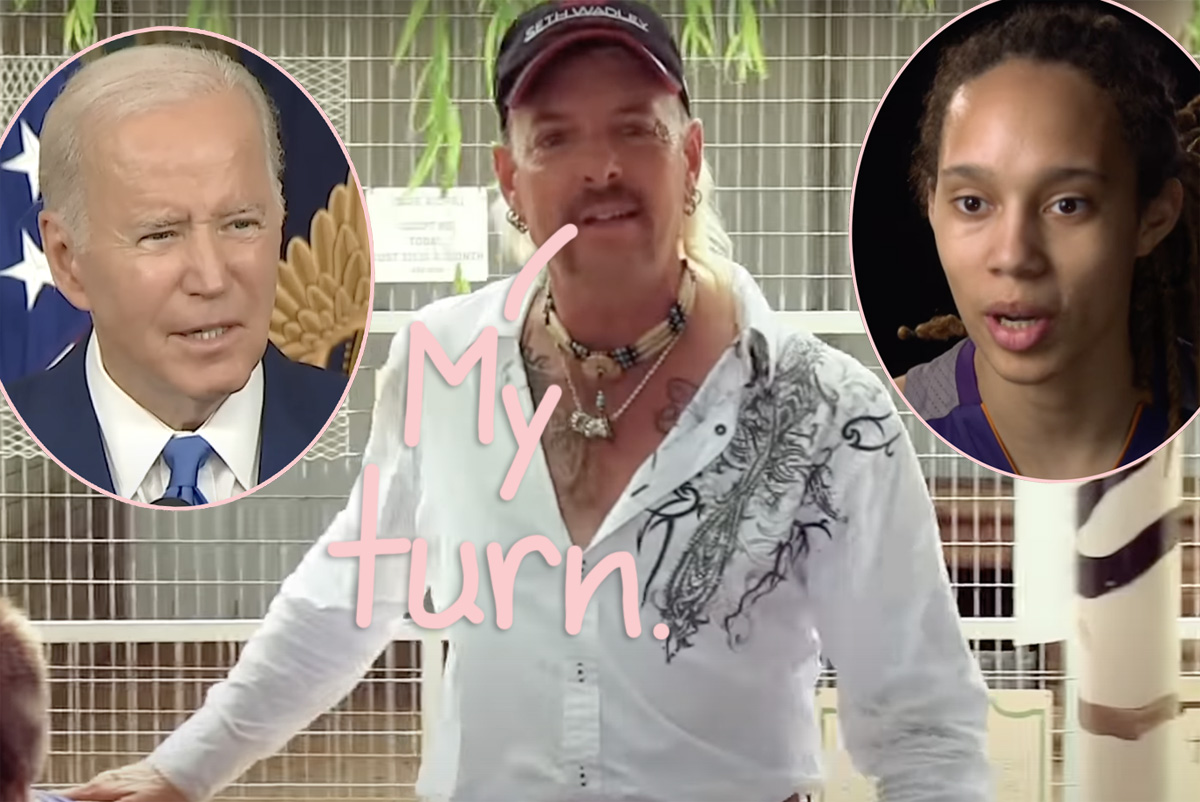 Joe Exotic is pissed that Brittney Griner was able to walk free from a Russian prison… and now he wants his own deal from Joe Biden!!

The former Tiger King star is serving two decades in federal prison, of course, following a conviction on a murder-for-hire charge directed at his ex-costar Carole Baskin. And while another federal judge recently re-sentenced Exotic, whose real name is Joseph Maldonado-Passage, to one less year in prison, the Netflix star still wants out ASAP.

According to TMZ, Exotic spoke in newly-obtained audio this week following Griner’s release from a Russian penal colony. In the clip, the Tiger King personality slams Biden’s deal to get the WNBA star free from the Russian legal system after she was convicted of flying into the country with cannabis oil in her luggage earlier this year.

Joe Exotic said in the clip:

“The whole Brittney Griner and Trevor Reed prisoner swap is a slap in every American’s face that is wrongfully detained in the American Federal Prison System, including myself.”

Again, Joe is serving a 21-year sentence after being found guilty by a jury of his peers in a long, sordid legal situation.

Of course, he’s never quite owned up to his s**t while in prison. As Perezcious readers will no doubt recall, the controversial tiger trainer previously pleaded with then-President Donald Trump while he was in office prior to 2020. Trump didn’t heed Exotic’s calls for leniency at the time. And honestly, there’s no indication Biden would ever do it, either. But it seems the disgraced reality TV star still can’t help but get his hopes up…

In a second comment, Exotic also spoke about the man for whom Griner was swapped — Russian arms dealer Viktor Bout. Bout had been serving his own two-decade sentence in prison prior to being released following Griner’s removal from Russia.

The Tiger King alum slammed that trade while (of course) referring to himself in the third person and referencing his boyfriend Seth in the commentary:

“A dangerous man was released for Brittney Griner to be free. It’s time Joe Exotic gets to go home for Christmas to be home with Seth and his son for the first time in 5 Christmases.”

You can listen to the full thing HERE.

Of course, Joe Exotic is right that the prison system contains plenty of injustices. Heck, even people like Kim Kardashian have put in work to prove that! We know this!! It’s just that, well, Exotic’s case might not be one of those.

What do U make of Joe Exotic’s comments, Perezcious readers? Is this something we’re just going to keep hearing from him during every future presidential term? Are you surprised by his take on Griner’s release, or not?

Met Office extends ice and snow warnings across much of UK