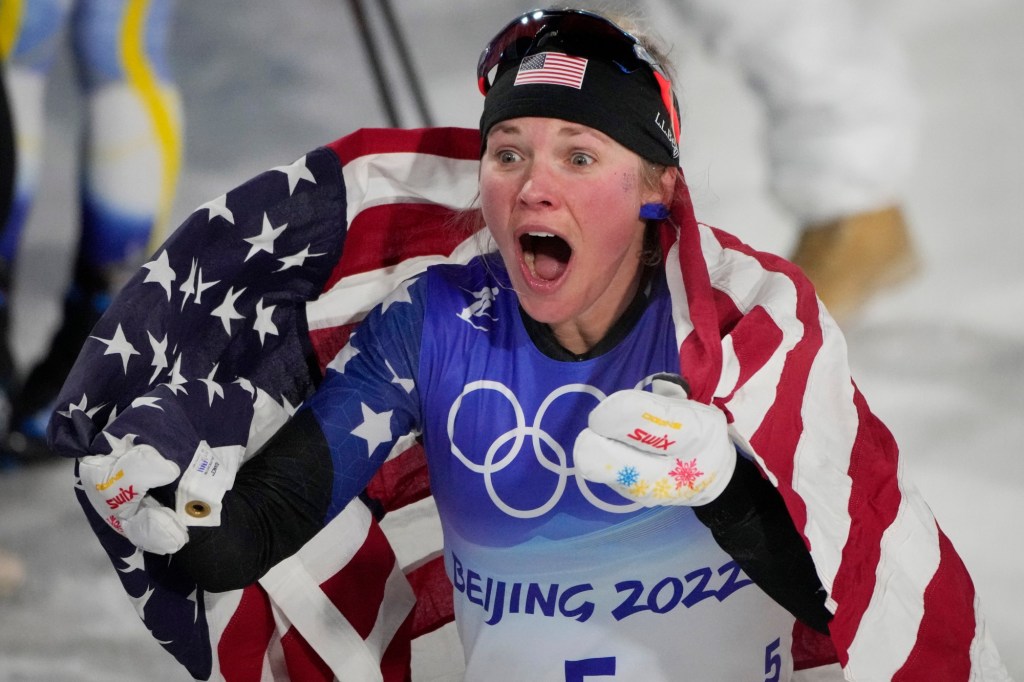 Jessie Diggins, the US cross-country star, showed she is not a one-Olympics wonder Tuesday when she captured the bronze medal in the women’s freestyle sprint at the Zhangjiakou National Cross-Country Skiing Center.

Her medal was her second in two Games, but the first individual Olympic medal for an American woman in cross-country skiing. The unquestioned leader of the American men’s and women’s teams, Diggins, 30, collapsed on the snow at the finish then collected a series of bear hugs from her teammates. They wrapped her in an American flag as tears dripped down her glitter-covered cheeks, Diggins’ signature look in big races.

“I just kept trying to ski as hard as I could,” Diggins said. “And I just told myself, just like every race, ‘I want to finish with nothing left.’ And I did do that. ”

Jonna Sundling of Sweden, who had dominated her three qualifying races before the final, won the gold by nearly 3 seconds. Her teammate Maja Dahlqvist took the silver, beating Diggins by a stride.

Diggins’ US teammate Rosie Brennan, a 33-year-old who has only recently broken into the top echelon of racers, was a surprising fourth as the Americans put two women in the six-competitor final in a sport long dominated by northern Europeans. Like Kikkan Randall before her, Diggins has begun to change that.

At the 2018 Winter Olympics, Diggins and Randall won gold in the women’s team sprint, producing a seminal moment from those Games and the first US medal in cross-country skiing since 1976.

An individual medal had long been beyond the reach of American women, however. But Tuesday’s race offered a rare opportunity that suited Diggins, the reigning World Cup overall champion. The freestyle sprint is a furious, three-minute tear around a 1.5-kilometer loop on a course built into the side of a hill that includes a lung-busting climb, a dicey descent and a final burst down the flat straightaway to the finish.

It is a unique test, requiring skiers to survive a series of heats to get to the final, making it a puzzle of speed and energy conservation. Diggins got off to a flying start, winning her quarterfinal by more than 2 seconds and then advancing again despite nearly crashing at the end of her semifinal.

In a sport that has so many athletes with massive shoulders and thighs, Diggins looks like a sprite in her racing suit, and it’s not clear exactly where she gets her power. But the power is there, as she flies up hills, and comes off climactic turns with a burst. On the downhills, she tucks low and cuts through the air.

She started slowly in the final and as she fought to keep pace found herself boxed in by three Swedish skiers for much of the race. But on the final climb Diggins put herself in position to escape and make a pass near the last turn. There, she surged ahead of Brennan, Nadine Fähndrich of Switzerland and Emma Ribom of Sweden.

The individual sprint represented her best chance for Diggins to capture a medal this year. A versatile all-around skier, Diggins excels in sprinting and freestyle skiing. Her biggest wins have mostly been in the sprint races, and while she has won at longer distances, she has rarely won while skiing classical style, which requires racers to keep their skis in a straight line.

That put the freestyle sprint, perfectly timed, right in her wheelhouse.

Olympic races alternate between freestyle and classical every four years, so the individual sprint will not be a freestyle race for another eight years, when Diggins will be 38, older than most elite cross-country skiers. That increased the pressure to deliver now on a woman who has emerged from an obscure sport to grace magazine covers and become one of the faces of the US Olympic team, even though the country has had little international success in her sport, especially at the Olympics .

Over nearly 100 years, the United States had won only a single silver medal in cross-country at the Olympics: Bill Koch’s silver in the 30-kilometer race in 1976 in Innsbruck, Austria. Now it has two in four years, with Diggins and Brennan suddenly looking like potential medal contenders again in the team sprint next week.