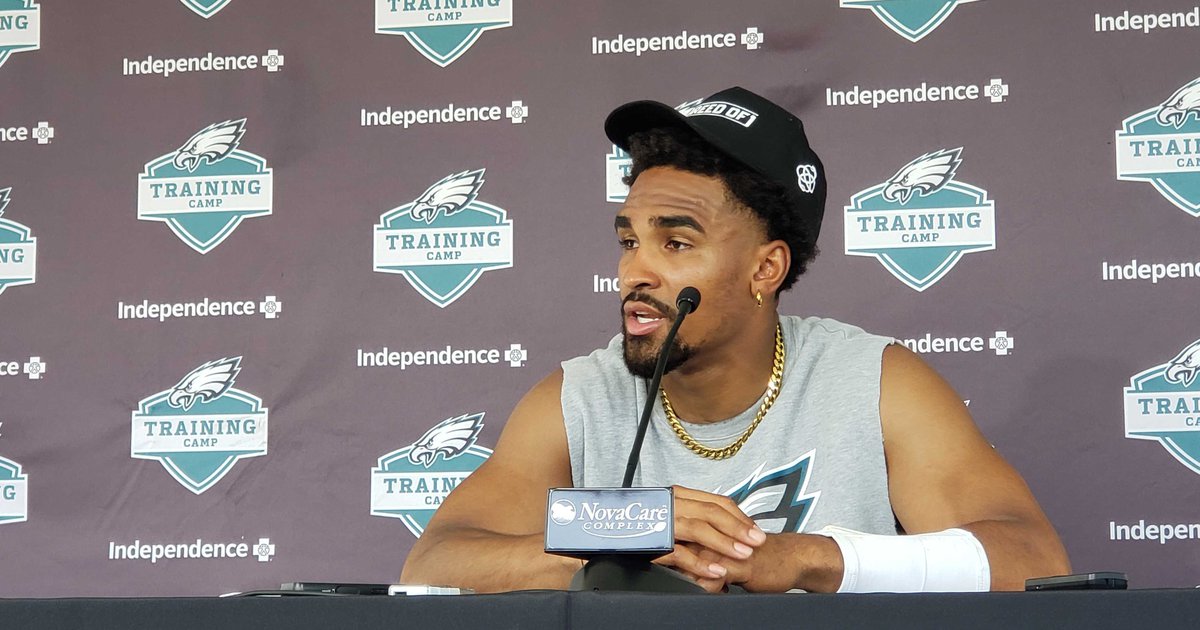 As AJ Brown might say, it’s Jalen Hurt’s SZN. During training camp, I’ll be tracking Hurts’ daily performances. Kicking off #HurtsWatch, the third-year quarterback excelled in the drills that I saw on Wednesday. Here’s how each of the plays turned out when Hurts was on the field during the Birds’ first practice open to the media:

• Play 2: Play-action, quick throw to the left to Dallas Goedert.

• Play 3: A nice middle of the field throw to Kenny Gainwell for a “touchdown” (it feels weird to call practice plays touchdown at times, but, hey, it’s fun). Hurts has struggled throwing to the middle of the field during his short NFL career. He made a few of these types of plays during OTAs earlier in the summer too. That’s a positive!

• Play 4: Quick dump-off throw to the right to Boston Scott.

• Play 5: Hurts hits Brown on the left side of the field for a “touchdown.” Hurts, as I alluded to, has been almost exclusively throwing to the right side of the field during his time with the Eagles. It’s a welcome sign to see him moving the ball all around even if it’s only training camp.

Break. When the first team offense returned to the field, it changed to a 7-on-7 look:

• Play 6: Hurts’ first read isn’t there and he hits Miles Sanders on a little stab route, throwing to his left again. It’s a short gain.

• Play 7: It’s a back shoulder throw to Quez Watkins in the right end zone. “Touchdown.” Perfect placement from Hurts. An even better catch from Watkins.

• Play 8: Hurts hits Brown in the middle of the field. Linebacker Shaun Bradley ripped the ball out of his hands. I’ll count it as a drop, but you could make the case that it was a catch and then a fumble.

• Play 9: An out of the ordinary play from DeVonta Smith, the second-year receiver dropped a great pass over the middle at the goal line from Hurts. It would’ve been an easy touchdown. I don’t anticipate that happening much, if at all, from Smith come the regular season. It looks like Smith had to do some push-ups as a penalty after too.

• Play 10: Boom. Hurts hits Goedert short to the left for another “touchdown.”

Break. Back to 11-on-11 play as the first team offense returns…

• Play 12: It’s a square in route from Scott on the left and Hurts passes to him for a short pickup.

• Play 13: The Birds run a screen to the right for Boston Scott. Scott hauls it in, but it’s would’ve been for no gain or a loss of yards.

• Play 14: Hurts hands it off to Sanders, who dashes left for a “touchdown.”

• Play 15: Hurts looks for Smith in the back corner of the left end zone. There was ultra-sticky coverage from second-year corner Zech McPhearson. The margin of error on this throw was very slim. It wasn’t an ideal throw, but certainly a hard one to connect on. Smith, nevertheless, almost brought it in on what would’ve been an unreal one-handed catch. Major props to McPhearson here.

Break. Birds’ first team offense returns to the field for the final drill of the day in the red zone. 11-on-11…

• Play 16: Hurts’ pass is immediately batted down at the line of scrimmage. Brandon Graham bobbled the ball on what was a near-interception. Not ideal, but not a travesty by any means.

• Play 17: Hurts’ worst pass of the day: He fires one in the end zone that hits safety Marcus Epps right in the hands. It was bad, but it was the lone play all day where I thought Hurts didn’t look mightily improved from what Eagles fans saw in 2021.

• Play 18: It’s a read option or RPO that leads to Gainwell rushing up the gut for a “touchdown.”

• Play 19: The play design is a straight right rollout. Hurts keeps his eyes up and nails a throw to Watkins at the back of the end zone for a “touchdown.” Watkins puts the cherry on top with a perfect toe tap. That’s exactly what the team wants to see after Hurts’ first two iffy throws of practice.

• Play 20: There’s immediate pressure and Hurts’ first (and second?) read isn’t open. He tucks it and runs for a “touchdown.” It’s obviously not live action with tackling, so it’s a hard play to evaluate in a practical setting. For a guy who rushed for 10 touchdowns last year, however, I have little concern that Hurts will be able to make those plays with his legs for scores in the fall.