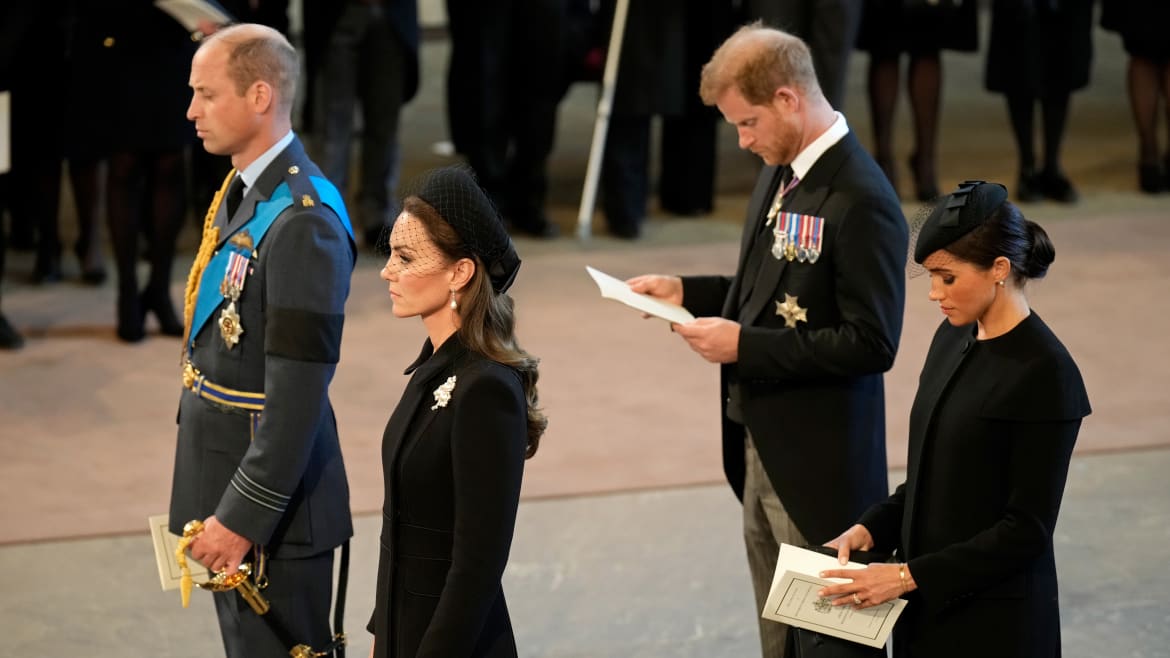 Relations between William and Kate and Meghan and Harry descended into a state of outright war Friday, after sources close to the Waleses compared the Montecito-based couple to the Kardashians, after Netflix released a glossy trailer for their new reality docuseries, Harry and Meghan.

The timing of the release appeared designed to overshadow the Wales’ current trip to Boston, and came after the royals plunged into a self-inflicted racism row.

The comparison with the Kardashians was made by sources in the Wales camp in several reports carried across different U.K. newspapers Friday morning. The reports are emanating out of Boston, where the Prince and Princess of Wales are tonight presenting the multi-million dollar Earthshot Prize, funding and rewarding environmental ingenuity.

In the Daily Mail a source described as an “insider” said it was “hard not to make the comparison” between the Sussexes and the Kardashians, stars of the long running eponymous reality series charting every aspect of their lives.

Another source described as “well placed” told the Mail: “One can only conclude this is a concerted publicity drive on their behalf to stoke up interest in this documentary and is designed to clash with the Wales’ visit this week.

“The prince and princess’ high-profile trip to the States to shine a light on community projects in Boston and the environmental crisis is being apparently used as a platform for the Sussexes to create the drama and attention they so clearly crave on a personal level, as well as content for the multi-million dollar deal they have signed since quitting as working royals. While the Waleses will carry on with their duties, Team Sussex appears determined to remind America of their own ‘compassionate activism’—one lucrative contract at a time.”

In an article in The Times of London, royal reporter Valentine Low wrote that Harry and Meghan were now being “nicknamed… the Kardashians… by some sources close to William and Kate.”

One source told The Times of the timing of the Netflix trailer release: “It was definitely deliberate, without any question. But not at all unexpected.”

Low said that the mood in the Wales camp was, “one of resignation, even amusement, rather than anger.”

The Telegraph quoted a source saying: “You can see the contrast between the royals focusing attention on the communities of Boston and the Earthshot Prize, and others busy talking about themselves and making money.”

The comments, the general tenor of which are likely to have been authorized at the highest levels of the Wales operation, represent a new low in relations between the warring couples.

The one-minute trailer featured dozens of previously unseen images, including Harry playing the guitar for Meghan and Meghan apparently weeping.

In a video clip, Harry is seen saying: “I had to do everything I could to protect my family.”

Netflix said in a statement: “Harry & Meghan is an unprecedented six-part documentary series that explores the span of their relationship, from the early days of the couple’s courtship to the challenges and controversies that prompted them to step back from the royal family.”

The Waleses will try to take back control of the narrative when they meet President Biden on Friday. They also released some backstage images of themselves rehearsing for the awards show.