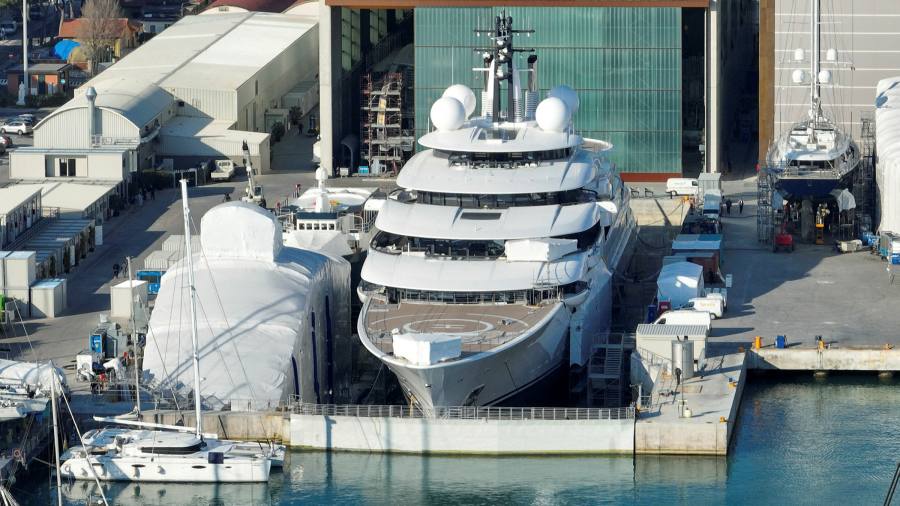 Since Russia’s invasion of Ukraine last month, Italian investigators and curious onlookers have had their eyes on a particularly conspicuous superyacht moored at the bustling Tuscan resort of Marina di Carrara.

The Scheherazade dwarfs all the other vessels berthed at one of luxury yachting’s high-end workshops, the Italian Sea Group shipyard. The 140-meter ship boasts six deck levels, two helicopter pads, a swimming pool and – some speculate – possibly even an anti-drone defense system. Russian opposition groups allege it belongs to their country’s president Vladimir Putin.

Italian authorities – who are moving to enforce EU sanctions imposed on Russia’s political and business elite following the invasion – confirm an investigation is under way but say they so far lack conclusive proof of the owner’s identity.

“It’s talk of the town – it’s sensational,” said retired boat welder Walter Ciancianoni, 67, who for decades worked on luxury yachts, including one owned by Ivana Trump, ex-wife of former US President Donald Trump. “Everyone who passes by stops to look at it. . . everyone wonders what’s inside: maybe gold handles, or extra-luxury rooms. Who knows what will happen: will it be impounded or remain in circulation? ”

Italy’s financial police, the Guardia di Finanza, have been active enforcers of EU sanctions against prominent Russian oligarchs allied to Putin. Italy is a favored playground for many of the multibillionaires.

Italian authorities estimate they have so far frozen oligarchs’ assets worth around € 800mn But the Scheherazade – one of the world’s largest superyachts, said to be worth about $ 700mn – would eclipse any single property yet seized in Italy were it to be confiscated.

Associates of the imprisoned Russian anti-corruption campaigner Alexei Navalny are publicly promoting the case that the mystery superyacht is probably Putin’s. In a video this week, activists from Navalny’s Anti-Corruption Foundation alleged that most of the Scheherazade crew were Russian and that several were employed by the country’s Federal Protection Service, which is responsible for Putin’s security.

The Italian Sea Group, which has been carrying out maintenance and repairs on the boat since it arrived last September, has sought to quell speculation that it belongs to the Russian leader.

In a statement issued on March 10, the company, which is listed on the Euronext Milan index, said that “based on the documentation in our possession and following the controls carried out by the competent authorities, the ownership of Scheherazade, which is currently at the shipyard for maintenance activities, is not ascribable to Russian President Vladimir Putin ”.

According to documents seen by the Financial Times, the yacht is nominally owned by Beilor Asset Limited, an entity based in the Marshall Islands. However, a Guardia di Finanza official, speaking on condition of anonymity, told the FT that it was difficult to establish Beilor’s true beneficiary.

“It is unclear whether the property is Putin’s or any other Russian oligarch’s because of the complicated company structure these individuals set up to shield their assets,” the official said.

However, the official said investigators had been in touch with Navalny’s team and had confirmed that some of the crew on the ship’s register were Russian security officers.

“The Russian crew members do lead us to believe the legal owner or the beneficiary is indeed a Russian billionaire,” the official said.

Speaking to the Italian parliament this week, Ukrainian president Volodymyr Zelensky named the Scheherazade as he urged Italians to step up Russian asset seizures. “Do not be a resort for murderers,” he told them.

In recent weeks, several superyachts owned by or associated with high-profile Russian oligarchs have set sail from various European ports to safer waters to escape EU sanctions. Some have sought refuge in Maldives, while tycoon Roman Abramovich has dispatched his vessels to Turkey.

The Graceful, an 81-meter luxury yacht frequently used by Putin and said to belong to him, left Germany for the Russian enclave of Kaliningrad two weeks before the Ukraine conflict began.

Russian oligarchs appear to have been more complacent about the luxury yachts moored in Italy, where they have long had deep relations with the business elite and where some members of the country’s national unity government – from the rightwing League and anti-establishment Five Star Movement – have previously expressed unabashed admiration n for Putin.

“Russians hoped – were convinced – that we were the weak link in the EU on issues of implementing sanctions and freezing assets,” said Italian journalist Jacopo Iacoboni, author of the book Oligarchs: How Putin’s Friends Are Buying Italy.

But the oligarchs had been proven wrong, he said: Mario Draghi, Italy’s prime minister, was deeply committed to the EU and its ideals and had been among the “toughest” on oligarch assets.

Kremlin spokesman Dmitry Peskov told the FT on Friday that Putin had “absolutely nothing to do” with either the Graceful or Scheherazade. “None of this is true,” he said.

Amid the intense spotlight on the Scheherazade this week, the Russian crew had been replaced by British sailors, shipyard workers said.

Paolo Gozzani, an Italian union leader representing the shipyard staff, expressed frustration at the lack of transparency and the uncertainty this posed for jobs. “It makes me very angry that workers do not actually know who they are working for – you get the impression that everything could change one day to the next,” he said.

Peering at the Scheherezade through a fence on a recent afternoon, Cecilia Cazzato, a 51-year-old housewife, expressed revulsion at the yacht and all that it symbolized.

“What an ugly situation,” she said. “Even if the war is far away, we feel the pain of all these people who’ve had to flee their home, whose lives have been destroyed. Quite a contrast to this super luxury yacht. ”