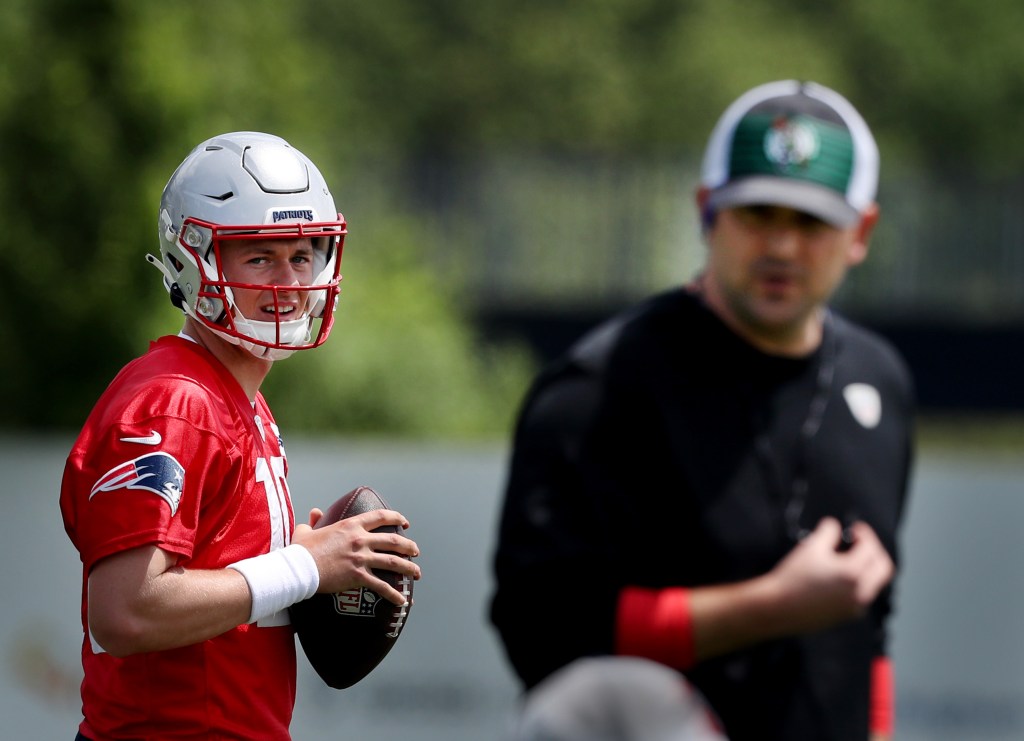 The way Mac Jones characterized his relationship with new Patriots quarterbacks coach Joe Judge on Monday was unsettling to say the least.

With one soundbite, it’s like everyone’s worst fears were validated with regard to the situation Jones now faces working with coaches who have little experience running an offense, much less dealing with a quarterback.

Speaking following the team’s organized activity session, Jones first praised Judge, but then went on to say the goal for himself and the coach who will be dealing with him most closely was to “teach each other.”

The latter three words have left a smell that’s lingered over Foxboro like skunk spray.

Jones is entering his second year in the NFL. So now he has to teach his position coach, too?

Maybe if Jones was an accomplished veteran, someone with Tom Brady’s stature and resume, that scenario would not raise so many eyebrows. But for a developing quarterback, even one as advanced as Jones, it’s still a big-time head-scratcher.

While the appearance of Bill Belichick hovering over the offense provides some comfort that all will not be lost, and Jones will not necessarily regress, it still seems crazy for the quarterback to have to spend time coaching up his position coach.

Or, as Jones described, to “move along and take what he knows and then take the experiences that I have and combine them.”

His experiences in the NFL amount to 18 games, 17 in the regular season, one in the playoffs.

Having Jones provide input about plays and concepts he likes, or does not feel comfortable with, is certainly an important part of the equation. That’s part of the give-and-take in the relationship between the quarterback and his offensive coaches. There’s no dispute there.

But teaching the coach should not be part of his job description.

ESPN football analyst and former Patriot Damien Woody was taken aback when he heard what Jones had to say.

“I came into this thing very skeptical, and worried about that whole situation,” Woody said when reached Thursday. “Man, you’re talking about the development of a young quarterback who had a good year his rookie year and you want Mac Jones to take that leap. And now you’re talking about teaching each other, learning on the job? What are we talking about here?

“I mean, I knew it was going to be a problem when Josh McDaniels left, because he’s such a bright offensive mind, really good with quarterbacks,” Woody went on, “but I just do not understand what they’re doing. Teach each other? That’s just shocking to me. ”

Jones needs a coach who will help him make adjustments on the sideline to combat what a defense is doing. He needs a problem-solver during the week, but especially during games.

Maybe that’s not under the realm of the quarterback coach who’s not also hold the titles of offensive coordinator and play-caller, all jobs McDaniels rolled into one when he was with the organization. One would assume, however, that the QB coach needs to help the quarterback play the position better.

Judge was a quarterback at Lansdale Catholic high school. So it’s not a completely foreign concept, but that’s basically it when it comes to his credentials to develop Jones.

That being said, maybe Judge turns out to be great at mentoring Jones. Maybe he will prove his doubters wrong. It’s just hard imagining Judge being the kind of quarterback whisperer that’s needed to get Jones to the next level.

“If I’m a second-year quarterback, you want as much continuity as possible, but I do not know how I’d feel with a guy who was a former head coach, but also a special teams coach,” said Woody . “I do not know how comfortable I’d be with that. That is just shocking to me. ”

Before leaving Alabama, Jones helped get new offensive coordinator Bill O’Brien up to speed with the Crimson Tide’s playbook. But teaching O’Brien and doing the same with Judge isn’t quite the same deal. Jones’ time in Alabama was over. He was not going to have to deal with O’Brien on a daily basis. He’s now attached to Judge, so as Woody suggested, it’s easy to wonder how Jones feels about having to explain the offense to his position coach.

Like Jones, Trevor Lawrence and Justin Fields have new quarterback coaches in Jacksonville and Chicago respectively, heading into their second seasons, but neither have expressed being in “teach each other” mode.

Woody made mention of Belichick largely staying in-house when people leave, or hiring people he’s had a previous relationship with. It applies to both Judge and Matt Patricia.

Having continuity with the offensive and defensive playbooks is vital for Belichick, so it’s understandable he’d want to rely on those who know the system. The turnovers on the offensive side of the ball, losing McDaniels, along with offensive line coach Carmen Bricillo, wide receivers coach Mick Lombardi, and running backs coach Ivan Fears, made a significant dent.

“I’ve said, and felt there’s just been so much of a brain drain in New England for several years,” said Woody. “When you have so many people leaving the organization, at some point it’s going to hit. It’s gonna hurt.

Jones is usually very careful not to provide much in the way of soundbites that will have an extended shelf life. So it’s hard to know if it was innocently delivered, or intentional in terms of purposely providing intel on the situation.

Maybe one of the media members present for Jones’ availability – present company included – should have asked him to further clarify what he meant by “teach each other,” even if it seemed self-explanatory.

Whatever the case, it’s hard to doubt the validity of his words.

The bottom line, though, is pretty clear. Belichick believes the cast of coaches he’s assembled around Jones will get him to the next level. Again, it’s certainly possible, especially with Belichick more involved, but the appearance of Jones needing to teach his direct position coach, who will also have a hand in the offense, remains puzzling.

“It’s hard to go against Bill, because Bill has achieved so much as a coach,” said Woody, “but at the same time, what are you doing? I just do not get it. ”

Like Jones, Jets second-year quarterback Zach Wilson embarked on an offseason program to dump the bad weight, and add muscle.

While Jones has trimmed down in terms of body fat, Wilson has done the same, but has also added 13 pounds to his 6-2 frame, as he’s now up to 221 pounds.

Jones, who looked noticeably thinner, indicated he still needs to add some bulk and muscle to get where he wants to be.

Woody, who recently ran into Wilson, was impressed by the quarterback’s new physique.

“It’s noticeable. He’s bigger. I would say he’s filled out more, ”said Woody. “You see it in his face, his arms, and definitely in his legs. He’s put in some serious work this offseason. ”

Unlike Jones, Wilson struggled during his rookie season. He ranked 30th out of 31 qualified passers in Total QBR (28.2).

“I feel better for sure,” Wilson told reporters following one of the Jets practices last week. “The energy, the ability to have that stamina throughout the whole practice, is better. In the long run, once we get into a game when we can actually get hit and tackled, having more size on me will help. ”

“He missed games last year. If you can bulk up and sustain and stay on the field, that’s what it’s all about, ”said Woody. “His talent has never been a question. That dude has a special arm. Now let’s see where he can go. ”

Of those who participated fully, Jack Jones, a corner drafted in the fourth round out of Arizona State, saw plenty of action in the team periods.

He played outside corner during those drills, caught points late in practice, and at one point, received some 1-on-1 tutelage from Belichick.

Watching him at corner, his fluidity as an athlete and ability to move seemed fairly obvious. So was his ability to high-point the ball.

Speaking recently with CBS NFL analyst Charles Davis, who also serves as a draft expert for the NFL Network, he liked the pick for the Patriots.

At 5-foot-11, 171 pounds, he’s not the biggest corner, but his man coverage skills and willingness to be physical have allowed him to play out on the boundary.

While it’s way too early to plot him in the mix of outside corners with Malcolm Butler, Jalen Mills, Terrance Mitchell, et al, he’s just someone to keep an eye on going forward.

He had some issues in college – he was arrested for breaking into a restaurant, and also suspended for fighting in practice – but the Patriots had to check him out pretty thoroughly before bringing him aboard.

“I’m sure they vetted all that,” said Davis. “It did not prevent them from taking him, so I do not think that’s a huge deal.”

Patrick Mahomes may have lost Tyreek Hill, but he still likes the depth of his receiving room.

The Chiefs quarterback trained with many of his pass-catchers – both new and old – in Texas for the first few weeks of the offseason program.

With them on the field now for OTAs, Mahomes has gotten a better feel for Marquez Valdes-Scantling and JuJu Smith-Schuster, who were signed into free agency, along with a group of rookie receivers led by Western Michigan’s Skyy Moore.

Mahomes suggested teams will not be able to shut down this group.

“I think having all those guys, I think it’ll help us get more of those deep throws that we’ve been accustomed to.”