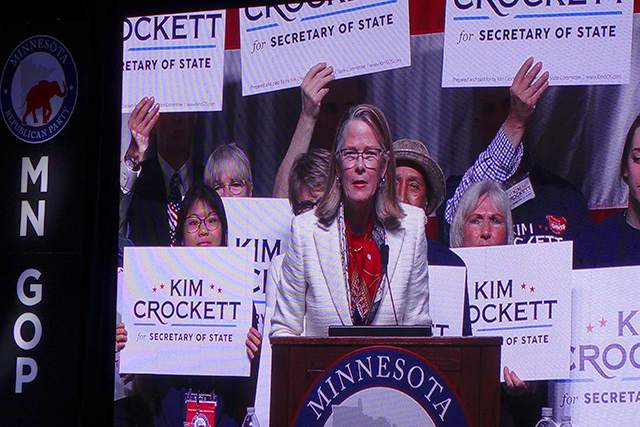 As far as my employer, the American Jewish Committee (AJC), is concerned, it does not matter who you support to be Minnesota secretary of state.

The AJC has long been nonpartisan and we have cordial and productive relationships with members of both parties.

That makes it easier for us to call someone out when they are behaving badly. Kim Crockett is behaving very badly.

Crockett seems to enjoy careening from one controversy to the next, ones often of her own making. But now Crockett has veered into the antisemitic lane and shifted into high gear. She needs to hit the brakes. Now.

Crockett’s latest episode of ugliness emerged at the Republican state convention, where a video of hers contained an image of billionaire Jewish philanthropist George Soros – a frequent target of antisemites and conspiracy theorists – as a puppet master manipulating the strings of DFL Secretary of State Steve Simon and election lawyer Marc Elias. Both are also Jewish.

The puppet master imagery is a classic antisemitic trope. As AJC’s Translate Hate glossary notes, “Jews have been accused of puppeteering the world economy for centuries, having been associated with money since the Middle Ages when commerce, trade, and other financial industries were the only professions Jews were allowed to have.”

Somehow, this video got played at the convention without it being vetted. Or those doing the vetting thought it was humorous to imply that a cabal of Jews have come together to manipulate Minnesota elections. I know, a real knee-slapper.

GOP Chair David Hann, to his credit, attempted damage control when he released a statement in which he apologized and said it “should not have happened.” He continued, “I have concluded after talking with Ms. Crockett that the depiction of Mr. Soros was not intended as anti-Semitic, and that neither Ms. Crockett or her creative team were aware that the depiction of a puppet-master invokes an old but persistent anti-Semitic trope. ”

Hann may be sorry. But you know who’s not? Kim Crockett. Notoriously media-averse, Crockett sent an email to supporters decrying “contrived and bogus political attacks” with a photo of a Tucker Carlson book resting on her legs. “Let’s laugh and be happy warriors as we knock doors, get our message out to voters and WIN.”

Crockett essentially repudiated Hann. She had her chance to echo what Hann said her intentions were or to acknowledge that the puppet master imagery is hurtful. She chose not to. Now we have to ask why.

Is it because she relishes her self-styled role as a brash party outsider who will not be reined in by the party establishment? Is she flipping the bird to reporters outside the right-wing fringe who are naturally curious about her? Or is she simply dispensing with the dog whistles and letting us know how she really feels about Jews in power?

These questions are being asked at a time when fears about antisemitism are on the rise in the US The most recent survey of American Jews by the AJC found 90% believe antisemitism is a problem in the US, while 82% believe antisemitism has increased over the last five years. Even more troubling was the finding that 39% have altered their behavior in public or online to conceal the fact they are Jewish. Words really do matter.

Even though there’s no doubt about her campaign video, I do not know whether Kim Crockett is antisemitic. I hope not. We should find out. Crockett’s campaign is all about election integrity. Let’s hope she can muster her own brand of integrity and let us know how she truly feels about Jews.

Jacob Millner is director of the Twin Cities regional office for the American Jewish Committee.