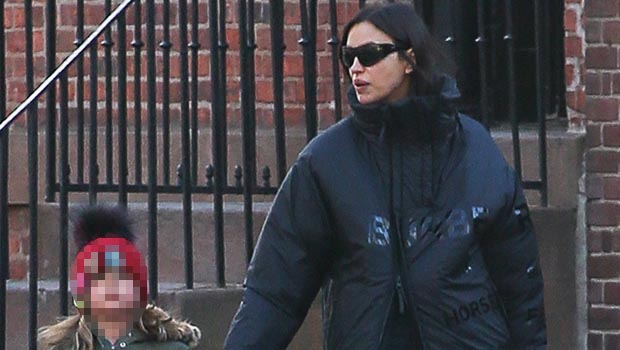 Irina Shayk, 36, looked like a busy mom during her latest New York City, NY outing. The model was joined by her adorable daughter Lea, 5, whom she shares with Bradley Cooper, and held her hand as they walked on the sidewalk in the chilly weather. She wore a long black Burberry puffer coat, flared out blue jeans, and black boots, as Lea wore an olive green coat over a checkered dress, tights, and blue fuzzy boots.

Irina also accessorized with sunglasses and held a black tote purse as well as a pink backpack that was most likely Lea’s. Lea topped her look off with a red knit hat with a black fuzz ball at the top. The pair looked relaxed and happy as they made their way through the Big Apple.

Irina and Lea’s latest outing together comes just one day after Bradley was also spotted with his only daughter. They were also out and about in NYC and the actor wore a dark blue puffer coat, gray pants, and gray, black, and blue sneakers. Lea rocked the same olive green coat and blue boots she was wearing while with her mom and red pants. Bradley added a black knit hat and sunglasses as he carried Lea’s pink backpack on his back and Lea had on a turquoise knit cap.

Irina and Bradley’s separate outings with Lea haven’t taken away from the rumors that the exes have recently reconciliated. “Bradley’s very protective of his privacy when it comes to Irina, so the fact that they’re being so public is very significant,” a source EXCLUSIVELY told HollywoodLife in Nov. “There’s been chatter about them getting back together for a while now, and everyone’s rooting for them because they’re a good match.”

The former boyfriend and girlfriend have been spotted on numerous family outings with Lea since they split back in 2019 and have remained friendly with each other. A report in Sept. also revealed that they were thinking of “getting back together” and were even considering having another child. “They both [Bradley and Irina] haven’t gotten serious with anyone else and they are both into the idea of having a kid,” an insider told Page Six after they reportedly recently enjoyed a tropical vacation together.

Report: Logistics providers expect to increase use of robotics by 133% in 2023