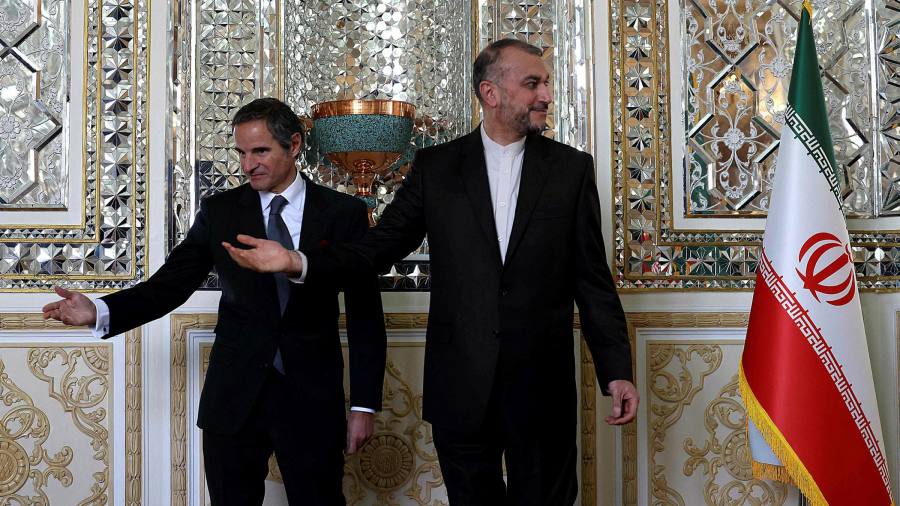 The US has ruled out offering any sanctions relief to Russia in order to clinch its support for an agreement to revive the 2015 nuclear agreement with Iran, rebuffing a last-minute demand from Moscow.

A state department spokesperson on Sunday told the Financial Times that the new economic sanctions imposed on Russia in response to its invasion of Ukraine were “unrelated” to the Iran deal and “should not have any impact on its implementation”.

“The United States has no intention of offering Russia anything new or specific as it relates to these sanctions, nor is anything new required to successfully reach an agreement on a mutual return to full implementation of the [nuclear deal with Iran]”The state department spokesperson added.

Tehran and global powers have been nearing an agreement to revive the 2015 nuclear agreement that would lead to Iran radically reversing its nuclear program in return for the US rejoining the agreement and lifting many sanctions on the Islamic republic.

But the last stretch of the negotiations has coincided with Russia’s attack on Ukraine and the massive economic and financial sanctions imposed by the west on Moscow due to the war. Russia, which is a signatory to the agreement and an important player in the EU-mediated Iran talks in Vienna, last week demanded guarantees that its trade with the republic would be protected from sanctions as part of any deal.

The US is balking at that request, leading to an impasse. Both Iranian and western officials have said they are close to a deal, but have been putting the onus on each other to make the decisions to finalize an agreement.

On Friday, Josep Borrell, the EU’s top foreign policy official, called for a “pause” in the talks blaming “external factors” for the need to take a break even though a “final text is essentially ready and on the table”. In a joint statement on Saturday, negotiators from France, Germany and the UK also suggested that Russia’s demands posed a serious complication.

“Nobody should seek to exploit JCPOA [Joint Comprehensive Plan of Action] negotiations to obtain assurances that are separate to the JCPOA. This risks the collapse of the deal, depriving the Iranian people of sanctions lifting and the international community of the assurance needed on Iran’s nuclear program, ”they said.

In Washington, senior officials said they still remained committed to the nuclear deal with Iran, despite the setbacks related to Russia’s position.

“The various negotiators are back home in their capitals and we will have to see what happens in the days ahead with respect to the diplomacy around the nuclear deal,” Jake Sullivan, the US national security adviser, told CBS on Sunday.

“One thing I will say is that the only thing more dangerous than Iran armed with ballistic missiles and advanced military capabilities is an Iran that has all of those things and a nuclear weapon and President [Joe] Biden is still determined to stop Iran from getting a nuclear weapon, ”he added.

The talks were further imperilled by a missile attack against Erbil, the capital of Iraq’s autonomous northern region of Kurdistan. Iran’s elite Revolutionary Guards claimed responsibility for the attacks, saying an Israeli intelligence center was targeted.

The assault on Erbil was in response to an alleged Israeli air strike near the Syrian capital Damascus last week that reportedly killed two commanders from the guards. The force had vowed to avenge the attack.

“Iran must immediately cease its attacks, respect Iraqi sovereignty and halt its interference in Iraq’s internal affairs,” the state department said. Although the missiles hit near the US consulate in Erbil, US officials stressed that there were “no indications” they were directed at America. But some senior US lawmakers opposed to the revival of the Iran talks said they believed there was a connection.

“It sounds like it had exactly the effect that the Iranians wanted. They fired these missiles at a US installation and now [the Biden administration] is saying, oh, well, we need to get [the deal] signed as quick as possible, ”Jim Risch, the top Republican on the Senate foreign relations committee, told Fox News Sunday. “This is nonsense”.