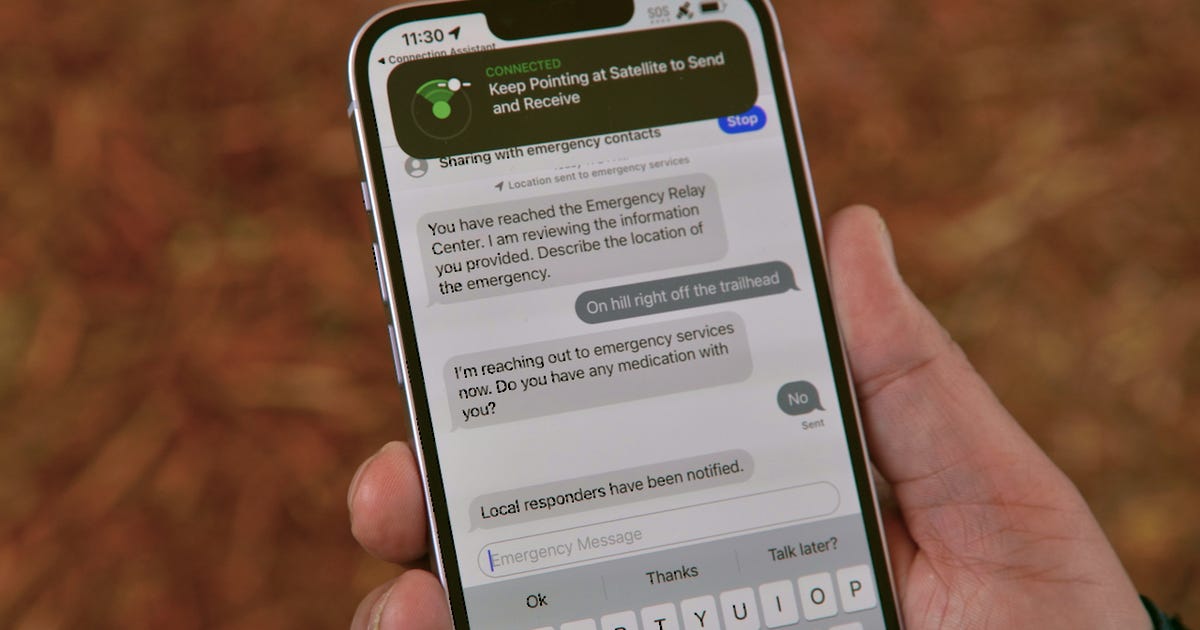 Two people were rescued by a search and rescue team Tuesday after their car went off the road and Crash Detection and Emergency SOS via Satellite on one passenger’s iPhone 14 alerted officials to the crash.

The Montrose Search and Rescue Team said on Twitter that the Los Angeles County Sheriff’s Department received a call from Apple’s Emergency satellite service about a crash on Angeles Forest Highway in Angeles National Forest around 2 p.m. PT Tuesday. According to Apple, the vehicle went off the side of a mountain and fell about 300 feet into a canyon.

A helicopter was able to get to the scene, and first responders got both passengers out safely. First responders transported both people to a nearby hospital with mild to moderate injuries.

“We understand from responders that the user’s iPhone 14 detected the crash,” an Apple spokesperson said in an email to CNET. “With no cellular service, [the iPhone] utilized the satellite connection to report it and connect the victims to our relay center via text message, who then called for help on their behalf.”

Apple announced at its “Far Out” event in September that both Crash Detection and Emergency SOS via Satellite would be part of the company’s iPhone 14 line.

Crash Detection in both the iPhone 14 and the Apple Watch 8 uses sensors to detect impacts and will automatically connect to emergency services. Apple said in September it spent years studying vehicle crashes in test labs and focused on four main types of crashes: front, side, rear-end and rollover crashes.

Emergency SOS via Satellite connects your iPhone 14 to emergency services whether your phone has service or not. You can also share your location with loved ones via a satellite without sending a message.

For more, check out what to know about Crash Detection and how to use Emergency SOS via Satellite.

Is Vince McMahon returning to WWE?