Netflix has revealed a first look teaser for a documentary sports series coming in 2023, one of their major sports offerings next year. Break Point is the official title of this docu-series, which includes 10 episodes in total. “Following a golden age of greatness, tennis’ next generation is ready to take over.” It’s exec produced and showrun by two acclaimed doc filmmakers – Paul Martin (of Make Us Dream, Diego Maradona) and James Gay-Rees (of Amy, Senna) also known for their recent popular F1 doc series “Formula 1: Drive to Survive”. Break Point follows a select group of top tennis players on and off the court as they compete in gruelling Grand Slams and tournaments. Featured players include Felix Auger-Aliassime, Matteo Berrettini, Ons Jabeur, Thanasi Kokkinakis, Nick Kyrgios, Aryna Sabalenka, Maria Sakkari, Ajla Tomljanovic, Sloane Stephens, and Stefanos Tsitsipas. Break Point gets up close & personal with top players on the tennis circuit through an entire year traveling across the globe for all four Grand Slams and ATP / WTA tours. Get a look. 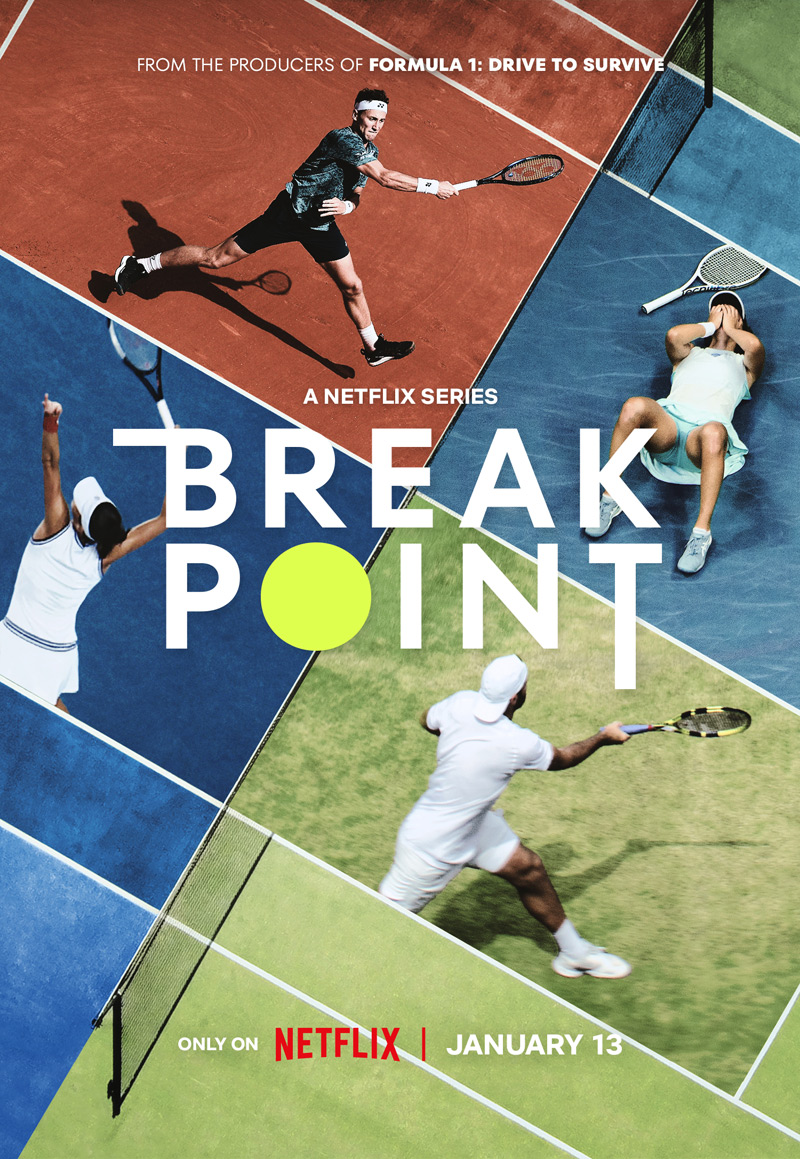 From the team behind F1: Drive to Survive, Break Point follows a select group of top tennis players on and off the court as they compete in grueling Grand Slams and tournaments all over the world. Their dream: lifting a trophy and becoming number one. As some of tennis’ legends reach the twilight of their careers, this is the chance for a new generation to claim the spotlight. Break Point gets up close and personal with these players over a year competing across the globe in the ATP and WTA tours. From career-threatening injuries and emotional heartbreak, to triumphant victories and personal moments off the court, viewers will get a behind the scenes look at the pressure-tested lives of some of the best tennis players in the world. Break Point is a doc series created and executive produced by doc filmmakers Paul Martin (producer of Make Us Dream, Diego Maradona, The Three Kings) and James Gay-Rees (producer of Senna, The Quiet Ones, All This Mayhem, Palio, Amy, Oasis: Supersonic), both producers of the doc Ronaldo and the series “Formula 1: Drive to Survive” previously. Made by Box to Box Films. Netflix debuts the Break Point series streaming on Netflix starting January 13th, 2023, with more episodes arriving June 2023 next summer.

Epic is shutting down servers for Unreal Tournament, Rock Band, and several others