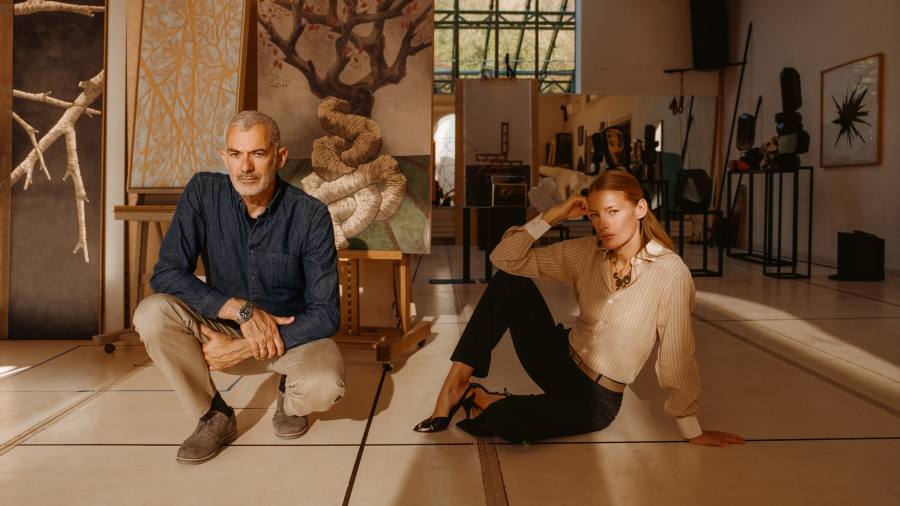 The prolific international designer and sculptor Arik Levy and his wife, the artist Zoé Ouvrier, have names, and work, that have been firmly established in Paris for decades. But it was not until two years ago, when they elected to leave the city and plant themselves and their two teenage daughters in a rambling house in the deep southern French countryside, that their lives – and art – began to bear unexpected fruit.

The couple had been searching for a large enough space away from the city for some time. In the summer of 2019, they finally found what they had been looking for: an estate on the Côte d’Azur that had been the hideaway of the ballet dancer Sylvie Guillem. Equidistant from the Préalpes d’Azur hiking trails and the sea, the two-storey house is surrounded by 1.2 acres of terraced land, planted with olive and citrus trees and awash in Mediterranean light. Between the towering cypresses are glimpses of the nearby medieval historic center of Saint-Paul-de-Vence, one of the oldest towns on the French Riviera.

“I do not know why we did not do this sooner,” says Levy. He is sitting in the house’s winter garden, at a table of his own making: the tabletop, which he designed for the surfaces company Compac, is a thin, asymmetrical slice of black quartz with a futuristic natural pattern. Once a white-plastered outdoor terrace, the space had been glassed in, and a small fireplace added in one corner. Today it functions as the family’s dining room, filled with light as well as dozens of eclectic objects, from Levy’s design prototypes to pieces picked up on the couple’s travels. The cultish award-winning Mistic vase and candleholder, six glass tubes that twist together, sits next to a menorah he made in his studio from offcuts of wood. His Mercury designs, silvered hand-blown glass bubble-shaped sculptures, are installed on one of the walls, while several baskets hand-woven by Australian indigenous artists are hung opposite.

Ouvrier, who made a living as a model while also studying at the Ecole des Beaux-Arts, knew upon seeing the house that it was The One: “I made Arik fly the next day from LA,” she says. Guillem’s studio – 150sq m at the heart of the ground floor, with soaring ceilings and skylights – captivated them both. But it was the expansive grounds, which skew more wild than manicured and are home to a mix of fruit trees and fields of wildflowers, sloping down to a stone lap pool, that clinched the deal. “The greatest luxury of this property is that only a small part of it is actually built upon,” says Levy.

Another attribute in its favor was the fact that the house required no major renovations. They moved right in, and focused immediately on filling it with their own art, Levy’s design projects and pieces from their collection. The latter range from a David Nash drawing to centuries-old artefacts from New Guinea. The soaring studio, divided by a tall shelving unit, is a sort of greenhouse of experimentation and creativity, located just past the winter garden and the small but much lived-in kitchen.

The garden is like a living organ of the house

Down the hall is a living room, with an unusual floor that has two large Japanese tatami mats embedded within it. (“Sylvie would do stretching exercises or dance on them,” explains Levy). The 60sq m space is lined with personal objects: an old surfboard and guitar of Levy’s, early 20th-century warrior body armor from Papua New Guinea, a Baccarat vase, a kinetic sculpture, a basket-like lantern woven from multicolored electric cords (from a series called Umbilical – Levy made the first one 30 years ago). The aggregate resembles an outsized cabinet of wonders. The only bedroom on the ground floor – a small space that looks over the outdoors sculpture area and view – is Levy and Ouvrier’s. A maze-like lower floor – subterranean on the entrance side of the house, but opening to the garden out back – holds a further six, for their daughters and guests.

Although Levy and Ouvrier work in completely different mediums and use contrasting techniques (her work is entirely handmade; his is partly engineered, and typically produced by workshops), their output somehow feels part of the same ecosystem. On one side of the studio, Ouvrier’s large-scale pieces, dynamic images of tree trunks or rhizomes, are both painted on and carved into large rectangular pieces of plywood, like woodcuts; several are combined into triptych screens. One of these, with its gold-leaf background, resembles a detail out of some massive medieval illuminated manuscript. On the space’s other side, Levy’s sculptures and prototypes are a variety of dimensions, many of them fabricated from stainless steel polished to a mirror’s surface and mounted on black stands. Long a prolific industrial designer (he has created lighting for Baccarat and Vibia, and furniture for Vitra and Ligne Roset), Levy has recently been compelled to pursue his art – playing with those fractal and geometric forms found in nature, particularly in minerals and ice . The results look like monumental gemstones, or totems from another planet.

Both admit having similar goals in their art making – namely, to confront viewers with abstract ideas of nature and inspire inquiry. “I want people to wonder about what’s in front of them,” says Levy, “and to ask, ‘Is it solid or liquid? Is it getting crystallized or evaporating? ‘ And then reflect on their own state of mind. ”

In many ways, they acknowledge, it had not been possible to cultivate a wider perspective on their work until they had moved into this studio and started living with their art. “Now I wake up and my sculptures are some of the first objects I see,” says Levy. “They change depending on the time of day, and the quality of the light. Before, when I was working out of my own studio in Paris, sometimes I did not even see the final work until it was packed into a crate and sent to an exhibition. Then someone would buy it and I would never see it again. It’s such an important thing to live with the work. ”

Almost from the beginning, their life embedded in the Mediterranean landscape sparked other ideas and projects. They spent more time together, much of it exploring their acreage. “Because you see it from every window, and because it’s so alive, the garden is like a living organ of the house,” says Levy. “I’ve always lived in cities, so to be here is for me both a revelation and a revolution.”

The terraces were already densely planted with olive, citrus and colossal cypress trees, as well as stands of lavender, fig trees and agapanthus. Not only did Levy and Ouvrier embellish further, adding mimosa, avocado and Mirabelle plum trees, but Levy also began to place his sculptures throughout. Today there are more than two dozen of his works scattered across the land. In late spring, the couple will open the sculpture park, as well as part of their house, for visits to small groups.

“We love having guests and sharing our space with others,” says Levy as the three of us amble along a path that weaves sharply down through olive groves and small fields of uncut grass and wildflowers. We stop at a monumental meteor-like work called RockGrowth; a much larger version of it, the height of a seven-storey building, is due to be installed in front of a new contemporary satellite space of the State Hermitage Museum in Moscow later this year. “It’s all about setting the stage for a meaningful exchange.”

“It’s also about showing our work and sensibility and ideas in the context of our larger vision,” adds Ouvrier. “We want to spark dialogue, about creativity and the environment and nature.”

Back up at the house, we sit on the sun-drenched stone terrace, partly covered by a bamboo pergola. From here we have a perfect view of Saint-Paul-de-Vence and its 16th-century ramparts. Once the stomping ground of Matisse, Chagall and other post-impressionists, today the village has, for its modest size, an impressive number of important contemporary art destinations. These range from the famous La Colombe D’Or hotel, with its Calder-adorned pool, to the Maeght Foundation, a remarkable collection of 20th-century artworks – there’s a Giacometti courtyard and a Miró labyrinth – set in and around a striking modernist home designed by the Spanish architect, Josep Lluís Sert.

Levy and Ouvrier are keen to be part of this story, whether it’s with their contemporary sculpture park or other future projects, which include a jewelery line inspired by their collection of found natural objects, such as seed pods and pieces of coral. The move into nature has awakened something new: “Our suitcases have always been full of stones or small pieces of driftwood,” says Levy. “But since we moved here, we are energized by the idea of ​​creating work out of that – out of the magic that is all around us.”