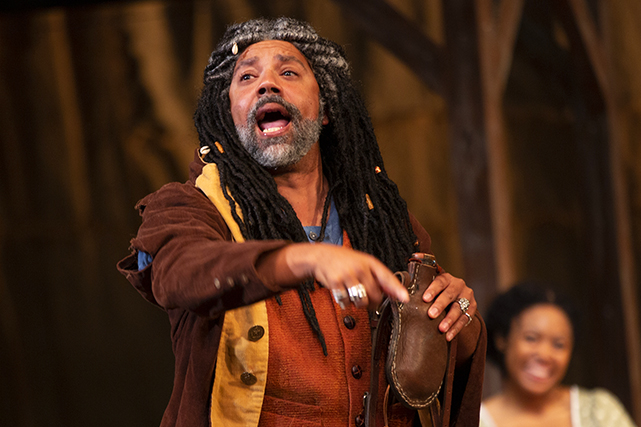 Before the country of the United States is 50 years old, a Black theater company founded by a freed slave from the West Indies named William Brown is busy putting on a production of William Shakespeare’s “Richard III” in New York City. Their success earns the ire of white theater company owner Stephen Price, particularly when the African Company moves its “Richard III” production right next door to Price’s Park Theater. Adding to Price’s urgency is the pressure from his lead actor, Junius Brutus Booth, who happens to be the dad of John Wilkes Booth, who years later would assassinate President Abraham Lincoln.

This fascinating moment in history proves compelling stuff in a play by Carlyle Brown, currently being presented at the Great River Shakespeare Festival (GRSF) in Winona, Minnesota. With a superb cast of actors and design team, and pointed direction by Corey Allen, Brown’s play asks questions around agency in storytelling, carving space for Black voices and experiences in the theater, and what the canon should look like.

In the play, Black actors in the African Company reject the notion that they can not participate in the art form of theater. They also begin to question what stories ought to be told, and by whose rules.

Confronted with criticism that they, a group of Black actors who all have day jobs, can not perform Shakespeare, the character of Jimmy (played with forceful, vulnerable grace by Adeyinka Adebola) notes that as a whole, they are more used to acting all of the time in their daily lives.

The notion of masks also emerge as a central theme in the play. The poem “We Wear the Mask,” by Paul Laurence Dunbar (1872-1906), appears in the program and also gets projected on the back curtain, made of bags for cotton:

We wear the mask that grins and lies

it hides our cheeks and shades our eyes—

This debt we pay to human guile ‘

with torn and bleeding hearts we smile.

Even today, the majority of mainstream theaters in the United States continue to be led by white people. That reality leads to inevitable skewed power dynamics within the form. GRSF itself has grappled very recently with problems that arise with this imbalance of power. Earlier this year, the company had to cancel its production of “The Taming of the Shrew,” because of problems that arose around race and casting.

GRSF is just the latest theater located in greater Minnesota to face controversy around race. Chanhassen Dinner Theaters canceled its production of Cinderella in 2021 because the cast was “98 percent white,Lyric Arts recast its 2022 production of Smokey Joe’s Cafe because it was not diverse enoughand Grand Rapids Players nixed its production of “Sister Act” because the lead actress, played by Whoopi Goldberg in the movie, was not Black.

In case you are not familiar, Shakespeare’s original version of “Shrew” has some tough elements for modern audiences, most noteworthy the notion of “taming” an angry woman, framed around a comedic romance.

According to Managing Director Aaron A. Young, Wolpe’s concept of flipping genders was as a way to investigate how women can have power and dominance. “The solution that she came up with was guns, because she set it in the West, so that guns were an accepted part of the conversation,” Young says. Then on the first day of rehearsal, the news came out about the shooting of Black customers and workers in Buffalo, New York. “We saw it in a completely different light after the shootings, and realized there’s a conversation that we need to have.”

With “Shrew,” not everyone involved with the production was telling the same story, Young says. “We kind of took a look at the amount of time that we had left to produce it and said, we were not going to be able to get there where we are all telling that same story so that the audience has a clear understanding of why we’re doing the show the way we’re doing it, ”Young says.

I sent Wolpe a message via her website but never heard back. GRSF ended up swapping out “Shrew” for “Always… Patsy Cline,” which is running in rep with “The African Company” and “Twelfth Night.” According to Young, the shift did not impact the actors’ pay.

In recent years, GRSF has had a focus of targeting its different departments to make sure there is more diverse representation at all levels of decision-making, Young says.

Young tells me the company’s investments in its diversity and inclusion efforts, including trainings, have opened up more dialogue and offered more people to give voice to concerns from different perspectives.

“When those voices happen, there are times that we say, hey, we’re going to address that issue. But now is not the time. So we’re going to come back to that. ”

GRSF’s diversity efforts include featuring Black playwrights and playwrights of color, perhaps a challenge for a company that specifically focuses on the work of a dead white male playwright.

“It means that when we do other plays, we need to make sure they are representing voices other than dead white men,” Young says.

Carlyle Brown’s play not only offers representation as a modern playwright, but also highlights work that “the canon” has missed, and even lost. After its production of “Richard III” gets shut down, the African Company decides to produce a play by William (Billy) Brown about a slave revolt on the Island of St. Vincent in the Caribbean. Brown is actually a historical figure, and he did write that play, called The Drama of King Shotaway, America’s first written by a Black playwright. Unfortunately the work is now lost to history. That is perhaps the biggest tragedy Carlyle Brown’s script reveals.

Carlyle Brown wrote the play early in his career, and it was produced in 1988 by Penumbra Theater. “It has legs for some reason,” Brown says. “The thing that is most interesting to me is how it is kind of almost more relevant now than it was the year it was written.”

Since the 2020 murder of George Floyd, Brown says he’s been getting more calls to be part of conferences and discussions by white theater leaders. “It seems like people in the theater are asking real questions,” Brown says. “Like, if you become inclusive, what does the canon look like? That’s a real challenging question. ”

Brown’s script is clever and biting, and delivers punches of truth. Meanwhile love, a play within a play, and Black rebellion are thrown into the mix. We may have lost Billy Brown’s script about the St. Vincent slave rebellion to time, but GRSF’s production of Carlyle Brown’s play makes a case for its place in the canon.