In My Neighborhood, We Played Asteroids…with Real Asteroids 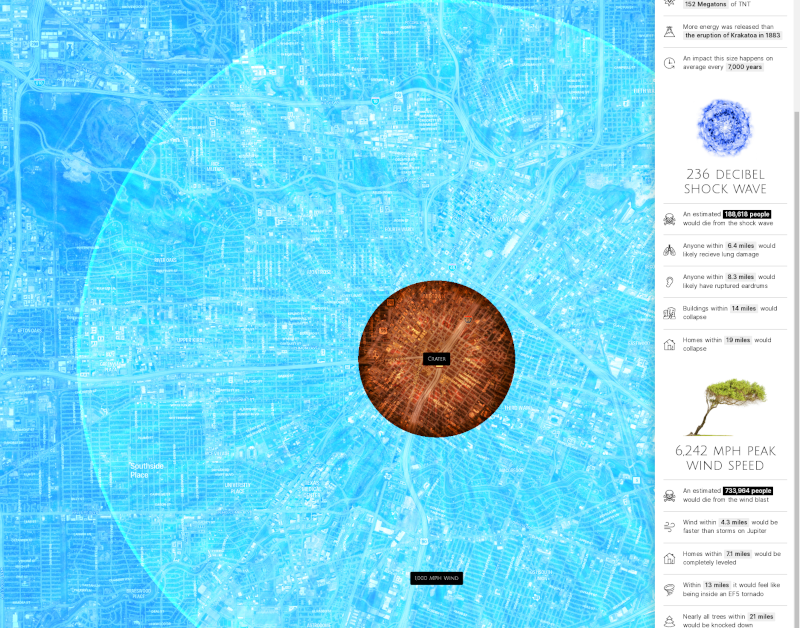 There was a comedian in the 1980s who always said he grew up in a tough neighborhood. He claimed they played cops and robbers with real cops. They played gin rummy with real gin. Well, maybe if he knew about [Neal]’s asteroid launcher simulation website, he would have said they played asteroids with real asteroids.

If you ever wondered what would happen if a 1,500-foot stone or iron asteroid hit your hometown going at 38,000 mph, now you can find out.  Apparently, I live far enough in the suburbs that even a 1 mile-wide iron asteroid hitting the center of Houston wouldn’t put a crater under my house. The 17-mile-wide and 2,608-foot-deep crater would release the equivalent of 399 Gigatons of TNT, but it wouldn’t reach me.

The 29-mile-wide fireball would be a different story. Oh, and the 244 dB shockwave would almost certainly reach me. So if the clothes catching on fire resulting in second- and third-degree burns didn’t get me, perhaps the shockwave would. The simulation says that zone will have 99% fatalities, and even further out, people will get severe lung damage. Eardrums burst even further away. Homes would collapse almost to the Mexican border.

The 1,000-mile-per-hour wind might present problems, too. While we are well-situated for hurricanes in this area, that’s about five times more wind than even a big hurricane generates. And we are not well prepared for earthquakes, much less the magnitude 70 quake that would occur.

Pretty bleak. On the plus side, a strike like that happens about once every 2.6 million years. If you try it yourself, be sure to scroll down the right panel to see the graphical representation of the different effects.

Maybe NASA is on to something when they tell us they want to learn to deflect asteroids. Even private foundations are getting into the business of finding them.