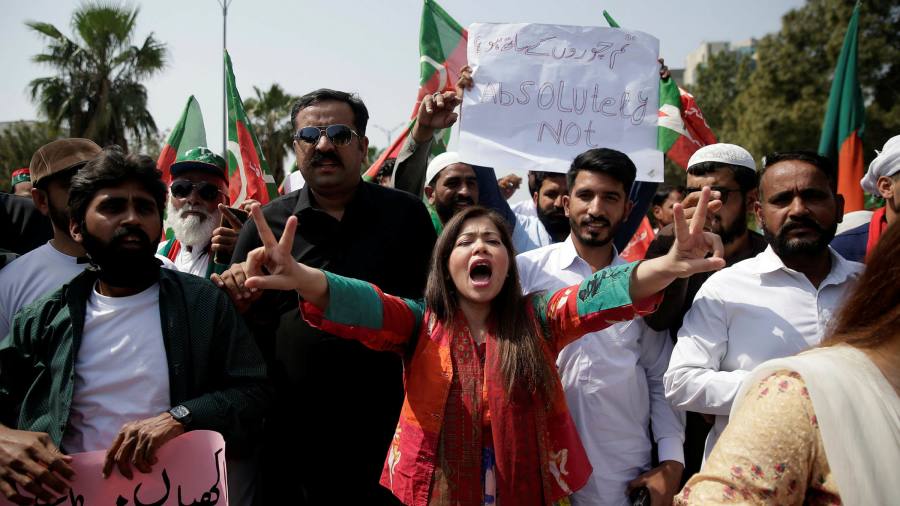 Prime Minister Imran Khan has dissolved Pakistan’s parliament and triggered fresh elections, catapulting the country into a constitutional crisis as the former cricket captain fights to stay in power.

With his party losing its slim parliamentary majority as inflation and falling living standards have stoked discontent, Khan’s political opponents had gathered enough support within Pakistan’s National Assembly to end the prime minister’s term with a no-confidence vote on Sunday.

But in a shock move, the Khan-allied speaker dismissed the motion in absentia, claiming that it was unconstitutional. Pakistan’s president then dissolved the National Assembly at Khan’s request, starting the clock for elections to be held in 90 days.

“I ask people to prepare for the next elections,” Khan said in a broadcast address on Sunday. “Thank God, a conspiracy to topple the government has failed.”

Elected on a reform and anti-corruption platform, the populist Muslim politician has struggled to live up to expectations. And although support from Pakistan’s powerful military was crucial to Khan’s victory in 2018, analysts said, the military has insisted it has no involvement in the current political situation – meaning the military is not coming to Khan’s aid.

No Pakistani prime minister has served a full five-year term, and the 75-year-old nation has been ruled by generals for about half its existence.

But Khan has reinvigorated some support in recent weeks by claiming that foreign powers are trying to oust him, accusing the US in particular – allegations a White House spokesperson categorically denied at a press briefing on Thursday.

Analysts said this rhetoric has helped drown out critics who blamed him for economic mismanagement as food prices rocketed.

Although Khan “[threw] all diplomatic norms to the air ”, said Huma Baqai, associate professor at Karachi’s Institute of Business Administration,“ food inflation, bad governance, no one was talking about it ”. In Pakistan, anti-Americanism sentiment is “not new and it sells”, she added.

“The street is almost jubilant” in reaction to Khan’s political maneuvers, Baqai said. “His supporters are like, ‘Captain did it again’.”

“What you are seeing is a compound political and constitutional crisis unfold in Pakistan,” said Azeema Cheema, research and strategy director at Verso Consulting, “where the only institution that was out of it, the courts, has now been brought in.”

By dismissing the vote of no confidence, “the prime minister has subverted the constitution”, Shahid Khaqan Abbasi, a former prime minister and senior politician from the Pakistan Muslim League-Nawaz opposition, told the Financial Times. “We simply want the Supreme Court to order the National Assembly to go into session and vote [on Khan]. ”

But the political turbulence puts more pressure on Pakistan’s economy, said Mohammad Sohail, chief executive at Topline, a Karachi brokerage, which is already suffering “challenges on inflation and external accounts”. Khan’s government and the IMF agreed a $ 6bn loan program in 2019, to avert a balance of payments crisis.

Khan has called for a show of solidarity from supporters. And having said that he may be at risk of an assassination plot, he compared himself to Imam Hussain, a grandson of the Prophet Mohammed who was killed taking a stand against a tyrannical ruler in the seventh century.

“Today, we are fighting for truth & patriotism against falsehood & treason,” Khan tweeted on Saturday, the eve of the holy Muslim month of Ramadan.

“It’s a politically volatile situation, you can have a lot of street violence,” Cheema said. But on the other hand, she added, Khan should not bank on a massive turn out “in the middle of [Ramadan] when everyone is fasting, in the middle of a bizarre heatwave ”.