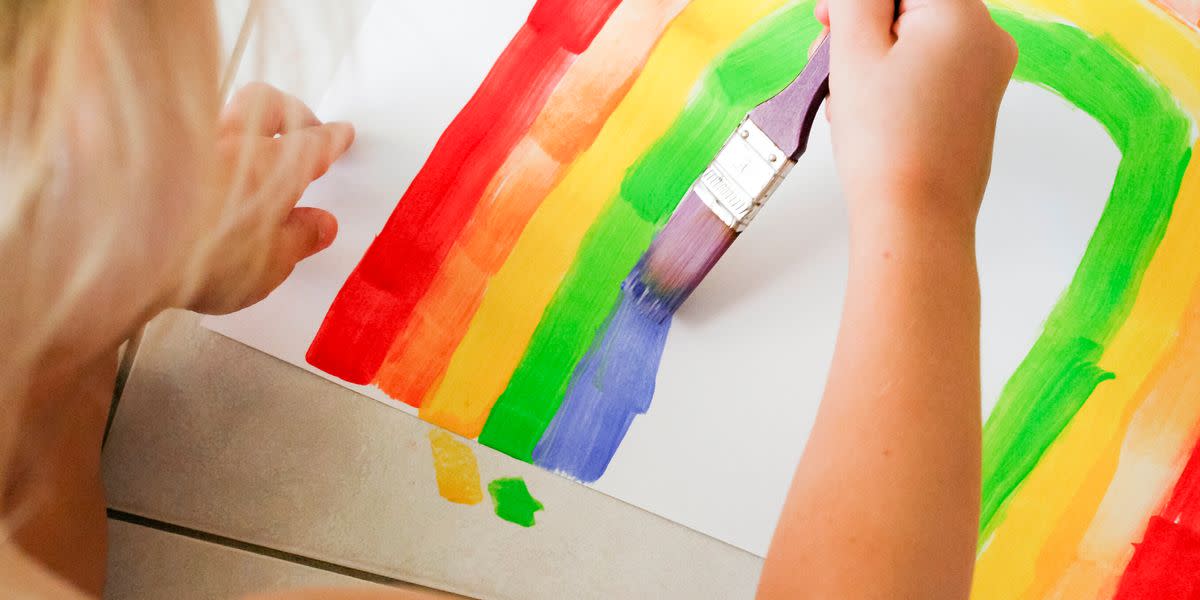 How am I attempting to raise my kids as homosexuals, you ask?

Well, it’s simple: I learned how from watching straight people enforce a sexual orientation on their children without ever saying “straight.”

One of the most amazing things about cisgender straight people is that most of them think they do not have a sexual orientation or a gender identity. A major premise of Florida’s recently passed “Don’t Say Gay” bill is that children should be sheltered from discussions of sexual orientation, and in many ways, I, a queer mom married to a woman, actually agree with this. That also goes for gender identity too – I think it would be amazing if schools stopped teaching gender as an innate expression stemming from what is in one’s pants. And I believe young children can learn all about love and family and different family structures without needing to have it framed in ways that are overly sexual or romantic. But that’s not how straight society likes to play.

The ironic twist regarding this legislation is that mainstream straight culture enjoys aggressively (hetero) sexualizing young children in ways that, if LGBTQ people did it, we would be labeled perverts, extremists and child abusers. And yet heterosexual grooming – a term I coined for this phenomenon – is so constant and ubiquitous most people do not even notice it.

What is heterosexual grooming?

It’s a set of practices and expectations based on a child’s assigned gender at birth, which promotes the formation of a romantic and possessive relationship between “opposite sex” children and their parents. As soon as these straight parents find out if they have a “penis baby” or a “vagina baby,” they seem to be obsessed with the idea of ​​a romantic bond forming with the parent who has different genitals from the baby.

I find this really upsetting. It not only sexualizes children but it does so in the context of family. Yuck. And, yah, perhaps applying the term “heterosexual grooming” to this practice sounds a bit harsh, but gay marriage is constantly likened to bestiality, so maybe we all just need a thicker skin, right?

Before everyone freaks out about any of this, let me take a moment to say “not all straight people.” But if you are a straight person who is feeling defensive, I suggest you explore that defensiveness. Is it perhaps because you are so accustomed to being part of – and promoting – a multigenerational zealous and omnipresent offense for Team Straight without even noticing that you’re doing it? That’s because this problem is systemic and it’s a system straight and cisgender people benefit from and uphold.

Of course, you can actively opt out, but that’s a conscious choice that takes a lot of work. Many parents think they say “gay,” but they do not do it often, and they never do when talking about their kids’ sexualities. They may love and discuss LGBTQ adults in their lives, but they imagine and believe their kids, or the kids they know, are straight and cisgender. Even in the most liberal of households, most kids will be raised as straight until they come out as otherwise. Yes, there remains a high statistical likelihood that your children will end up straight and cis, but they are way more likely to be LGBTQ than they are to be a doctor or a lawyer or a professional athlete, and plenty of folks are able to picture (and hope for) those futures for their kids.

What is most disturbing about heterosexual grooming is how young a child is when it begins and how aggressively it is often carried out throughout the course of a child’s life. This “father of the bride-ing” business starts when infants from heterosexual families are brought home from the hospital in tiny onesies with slogans like “Daddy’s Girl” and “Sorry, boys! Daddy says no dating. ” Kids assigned male at birth may end up in a “Sorry, girls! My heart belongs to mommy ”or a“ Boob Man ”tiny tee. I know, I know, this is all in good fun – if your idea of ​​”fun” is strategically forcing a sexual orientation on children before they can say “Dada” or “Mama.”

And it does not stop when children become verbal. Toddlers are apparently major heterosexual flirts. From the way some adults talk, these kids always seem to know to make eyes at anyone who has a different set of genitals from their own. How they fine tune this ability at such a young age, my own bisexual brain can not comprehend. It’s almost as if parents are just willfully creating a world where there is only one way to be and they project that onto their children.

Many parents think they say ‘gay,’ but they do not do it often, and they never do when talking about their kids’ sexualities. They may love and discuss LGBTQ adults in their life, but they imagine and believe their kids or the kids they know are straight and cisgender. Even in the most liberal of households, most kids will be raised as straight until they come out as otherwise.

This blind indoctrination continues in elementary school and further into adolescence with daughter / daddy dances, overprotective father culture, and teasing kids that they are each other’s boyfriend / girlfriend if they have friends who are the “opposite sex.” Even in adulthood, there’s this idea that daddy never wants to be replaced by another man and that no woman will ever be good enough for mom’s perfect boy. It blows my mind that mainstream hetero society decided to take all of their twisted Freudian business and treat it like a public to-do list rather than save it for therapy.

At first I thought this heterophilia forced on kids was disgusting, until it gave me the fantastic idea that I could also raise my children with a preferred sexual orientation from the very beginning of their lives. Although I am bi, my wife and I chose to go full-on gay with our kids – and let me tell you, I think it’s working!

As soon as we got our daughter home, she was obsessed with boobs – beyond the milk thing. She was a “Boob Man.” As she grew up, most of her friends in preschool were girls and we just knew that there was “something more” between them. As soon as she was old enough, we signed her up for softball so she could meet other LGBToddlers. Turns out she’s more of a high femme. Oh well, we’ll let her quit as soon as she finds a girlfriend – or maybe a wife. (LOL! Moms can dream, right?) It has been a little awkward when kids talk about their straight dads and moms at school – if only they could keep that lifestyle to themselves! – but we quickly dismiss that kind of talk by telling her, “That’s just something kids say.”

Now, because we’re a two-mom family, making sure our son is gay is trickier. But we already have a perfect husband picked out for him – another boy his age (hi, Emilio). They even kissed once through the bars of their cribs. They could not speak yet, but why would that stop us from knowing they had a spark? We’re doing whatever we can to encourage his gayness – like only letting him listen to show tunes and Britney Spears (no “Baby Shark” for our little queerspawn) – and we’re crossing our fingers that all this hard work will pay off .

What’s amazing is that we can do all this without ever actually saying the word “gay.” We just have to make sure that our kids understand that the only appropriate desire they can have is desire for their same gender.

Sadly, because our culture privileges and prioritizes straight and cis identities, it’s not only those folks who assume the world – and the future – is hetero and cisgender. LGBTQ people have rarely been told that we have a future to imagine or claim for ourselves. We have been denied legacy. Our histories are hidden. Our contributions are denied. Our lives are demeaned. Our love is labeled dangerous. Because of this, many LGBTQ people still believe we would have to be straight or cis to have a future worth living and legislation like the “Don’t Say Gay” bill reminds us how truly vulnerable we are.

Ultimately, I think some of the politicians and parents who support the “Don’t Say Gay” bill believe if we do not talk about the LGBTQ community to kids, then they will not figure out they are a part of it. We know that’s not how it works. No matter what parents or other role models do, you can not “make” someone gay, or bi, or trans, or anything else. I wrote this piece as satire to make a point – even if my wife and I actually spent every waking moment trying to force a “gay agenda” on our kids, they may still turn out straight. But that’s not what any of this is really about.

The truth is, growing up in a world where you do not see examples of yourself because everything systemically favors straight and cis people – or where people like you are erased or barred from being taught about in schools – has consequences. You believe you are not worthy of being seen or heard and that can lead to believing you should not even be here. On the other hand, if we embrace LGBTQ adults and families and kids are taught about our lives and history, kids will feel safe to be themselves. That actually might mean that more kids end up coming out as some part of the LGBTQ community and that will mean we end up with more LGBTQ people. But it’s not because learning about us made them LGBTQ. It just means it made them feel OK to be exactly who they are – and gay, or straight, or any other identity, really, that’s what we should all want for our kids, isn’t it?

Allegra Hirschman is a San Franciscan who moved during the pandemic to a New England suburb with her wife, two little ones and a mini-goldendoodle, Cupcake. She is a writer, multimedia storyteller, outspoken bisexual and flash mob initiator. You can find her occasionally commenting under the unfortunate twitter handle @allegrahirschma.

Do you have a compelling personal story you’d like to see published on HuffPost? Find out what we’re looking for here and send us a pitch!

This article originally appeared on HuffPost and has been updated.