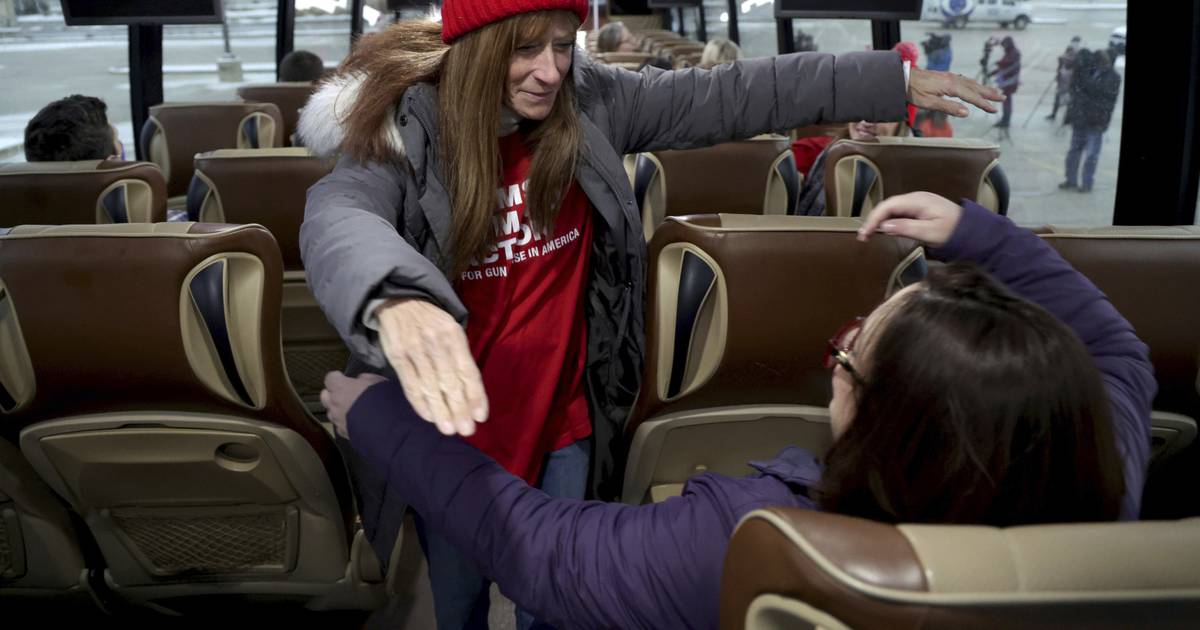 SPRINGFIELD — Dozens of gun control advocates rallied at the Illinois Capitol on Thursday to support legislation banning a number of firearms that lawmakers continued to revise throughout the day.

The gun legislation in the House is one of the major items under consideration during the lame-duck session that began Wednesday and ends Jan. 10. Shoring up Illinois’ already expansive abortion rights in light of the U.S. Supreme Court’s overturning of Roe v. Wade is also on top of the Democratic-controlled legislature’s agenda.

Democrats in the House and Senate on Thursday introduced separate measures that both broadly aim to expand availability of abortion services and to protect providers and patients from legal liability under restrictive laws in other states. Discussions with advocates and between the chambers were ongoing Thursday night.

Supporters of the gun legislation chanted “Pass the ban!” and “Not one more!” during the hourlong rally in the Capitol rotunda.

The measure was prompted by the mass shooting at Highland Park’s Fourth of July parade that left seven people dead and dozens more injured. Its sponsor is state Rep. Bob Morgan, a Deerfield Democrat who marched in the parade with his family.

Rachel Jacoby, a Highland Park resident and an organizer with the youth-led gun control group March For Our Lives, grew emotional as she talked about participating in her first active shooter drill when she was 7.

“Cowering under my desk, jaw trembling, trying to breathe normally, that drill was fake,” said Jacoby, now 26. “But the trauma that young people have endured from gun violence is real.”

Despite Democrats holding a 73-45 majority in the House, assembling the 60 votes required to pass the sweeping bill still is not assured and debate over changes to the measure were ongoing.

Late Thursday afternoon, House Speaker Emanuel “Chris” Welch introduced an amended proposal that eliminated a previous provision that would have eliminated the ability for most people under age 21 to receive a firearm owner’s identification card. Welch’s version also raised the maximum magazine capacity to 12 from 10.

Welch offered assurances that the bill, if passed, would not result in the “removal of these weapons (enumerated in the legislation) from people who already own them.”

“Every single person in this state deserves to go out on the Fourth of July and watch their Independence Day Parade and not fear being shot by assault weapons that don’t belong on our streets,” Welch said.

The amended bill passed out of the House Executive Committee by a 9-5 vote along party lines.

A federal ban exists on such devices but law enforcement officials argue that federal prosecutors don’t always take up such cases and attacking the issue through county prosecutors would provide another option.

The measure would also give owners of guns that have been designated as assault weapons by the legislature about a year to register them with authorities.

State Rep. Barbara Hernandez, a Democrat from Aurora, talked to supporters in the rotunda about the mass shooting in her town in February 2019 that left six people dead, including the gunman, and several wounded, five of them police officers.

The shooting prompted lawmakers to pass an overhaul of the state’s firearm owner’s identification card system and require the use of federal background checks on private gun sales in 2024, as well as other measures.

“However, as we know, this is not enough. There’s a lot of things that we need to do. A lot of action banning assault weapons, banning high-capacity magazines. We also need to focus on mental health,” said Hernandez said.

At an unrelated news conference Thursday in Chatham just outside Springfield, Gov. J.B. Pritzker, who supports a statewide assault weapons ban, said there have been ongoing discussions going on “virtually every hour of the lame duck” session.

“Those negotiations, discussions continue but I must say, there’s been an awful lot of progress made,” he said.

Pritzker acknowledged the need to penalize those who would violate the proposed gun restrictions should they become law, despite criticism from minority communities who argue they’re disproportionately affected by such penalties.

“We obviously need to hold people accountable who break the law if we’re going to ban assault weapons and someone is caught with an assault weapon that isn’t allowed to have one, hasn’t been grandfathered in or whatever, there have to be penalties for that,” Pritzker said.

Senate Republican Leader Dan McConchie, of Hawthorn Woods, said the gun ban proposal “does not address that core problem, which is keeping the guns out of the hands of someone who shouldn’t have it, like the Highland Park shooter.”

He talked about how large-capacity magazines have been used in shootings in the South Side communities that he represents.

“I often criticize the federal government for inaction on gun control, leaving states to fend for themselves and creating a reality where Illinois has led the charge but we’re still paying by the inaction of our neighboring states, making us less safe,” Buckner said.

Nicolas Cage is a gunslinger out for revenge


In Praise of The Quiet Screen Performance