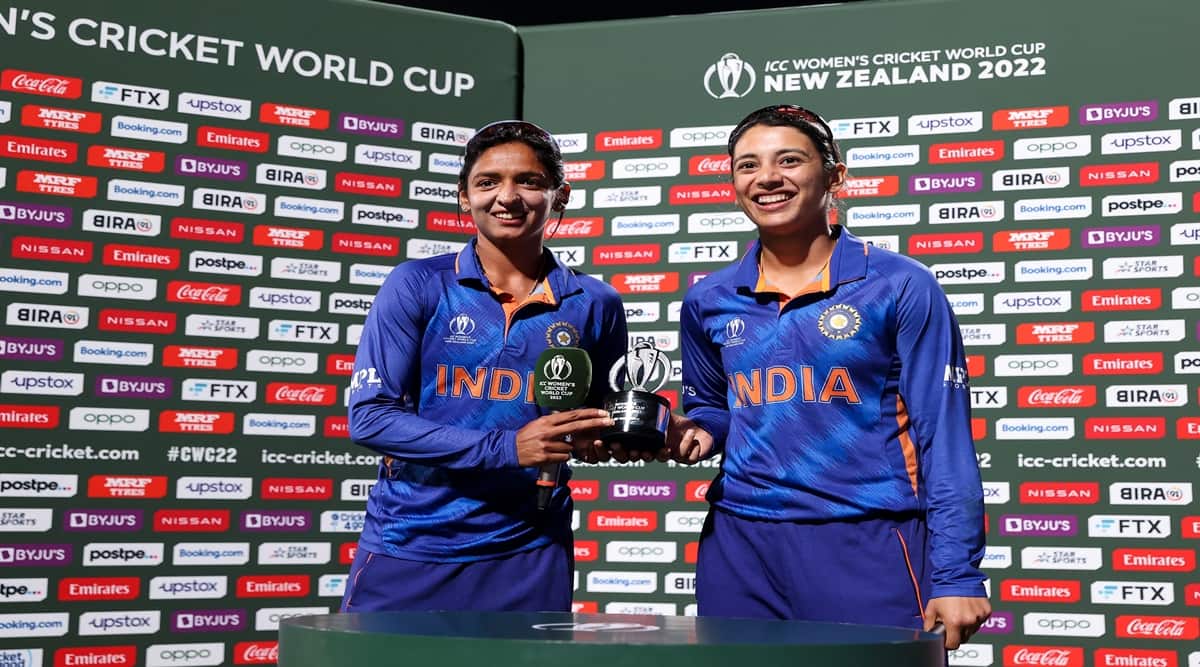 Against the Windies, India found themselves in a familiar sport losing three quick wickets for 78 runs after a brisk start.

Harmanpreet Kaur is at her best when she has her back to the wall, the stylish Smriti Mandhana said, after the duo’s hit hundreds in India’s emphatic 155-run victory over West Indies in an ICC Women’s World Cup match.

While Mandhana smashed her fifth ODI hundred, a sensational 123 off 119 balls, Harmanpreet slammed a 107-ball 109, her fourth three-figure mark, and the first since the epic 171 not out against Australia in the 2017 World Cup.

“From the outset, I feel when her back is towards the wall, that’s when she comes the best out and that’s something which I’ve seen,” Smriti, who shared her ‘Player-of-the-Match’ award with Harmanpreet in a novel gesture, said in the post-match media interaction here.

“Her work ethic is really up there in the whole team. She keeps going even if she does not get the results. World Cups are the place where she comes good. ” The duo put together a record 184-run stand – India’s highest partnership for any wicket at the ICC Women’s Cricket World Cup – as the last edition’s runners up put up 317/8 their highest total in the history of the showpiece event.

“She is a crucial part of our middle order. Happy she’s come back well. She has been batting well in practice. We were always confident that she would score runs. Happy that she scored back-to-back fifties. It will give her good confidence going forward. ” Talking about their partnership, she said: “The situation was quite tricky when she came into bat. I did not want to lose her or lose her focus. But once she was on 30-40s we all started having a lot of fun. We started talking a lot after that. she was smiling a lot more today. ” India next face the defending champions England on Monday No question marks about our batting

India’s strike rotation had come under scrutiny after their 62-run defeat to the hosts New Zealand in their last match.

Against the Windies, India found themselves in a familiar sport losing three quick wickets for 78 runs after a brisk start.

“When she came into bat, we were focusing more on singles. I did not want to stop the run-rate also so it was about converting the singles into doubles.

“We spoke about it a lot in the dressing room after the New Zealand defeat. Yastika (Bhatia) had set up the momentum (with her 21-ball 31). We just had to keep it going and could not afford to play the fancy shots. ” Asked whether batting was a concern after their flop show against the White Ferns, she said: “Our batting always sorted in our mind, we always knew that.” “We have been batting well for the past seven-eight months. Harman back to back fifties will give a lot of confidence to the middle-order. But other than that we were all really confident that there were no question marks over it. ” India bagged an array of records in their spectacular win including the captaincy feat of Mithali Raj who went past Australia’s Belinda Clark for most appearances as the skipper in the tournament.

Veteran pacer Jhulan Goswami also became the highest wicket-taker in the history of the ICC Women’s World Cup when she claimed Anisa Mohammed as her 40th victim in showpiece.

“She’s (Mithali Raj) has been a brilliant captain, playing that consistently for a long time is so remarkable. Someone like her and Jhulu Di in the dressing room, is great to have. ”

Were surprised by Indians approach: WI

“They had a plan, obviously they knew the conditions well, and did not execute as well as we would have liked. They did surprise all of us really with the way they went out, almost like they had a plan. They stuck to their plan and did well. batters did well, our bowlers just did not execute, ”she added.