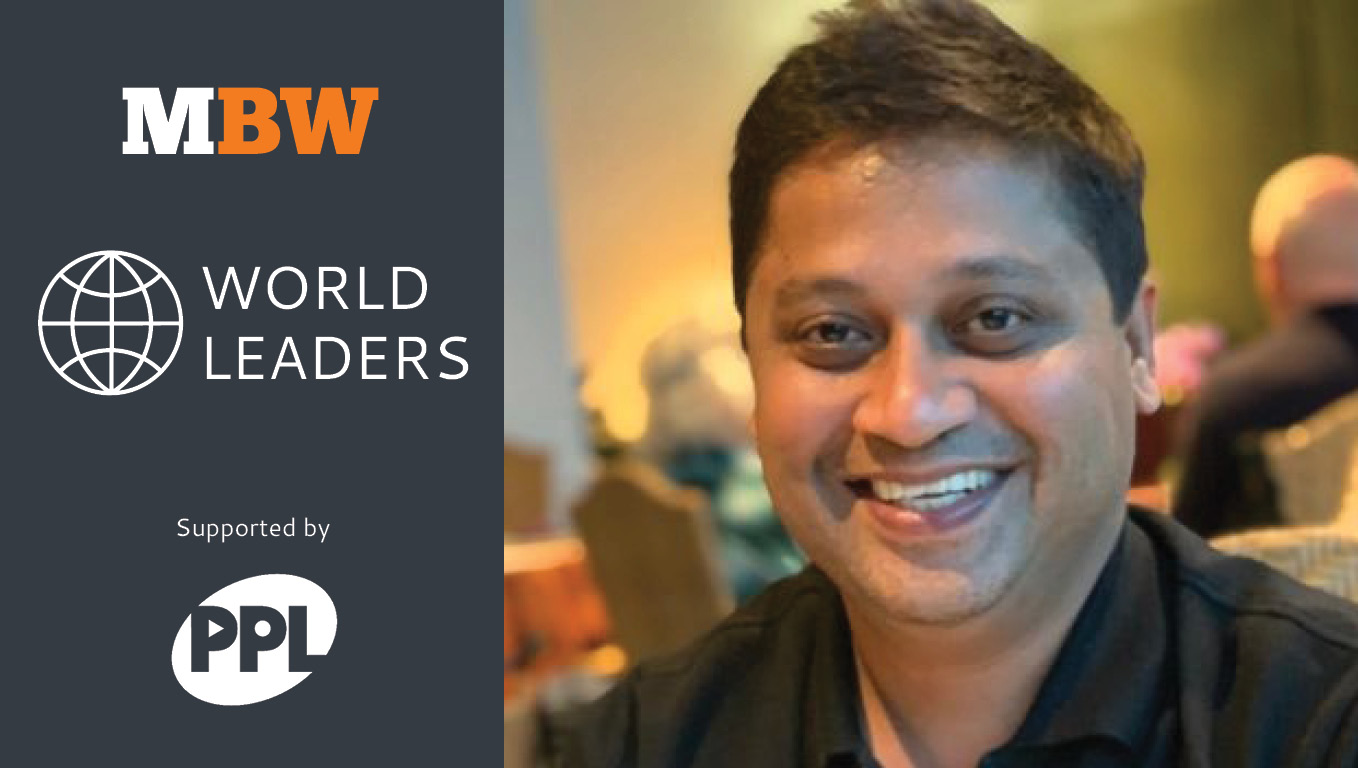 MBW’s World Leaders is a regular series in which we turn the spotlight towards some of the most influential industry figures outside the US and UK markets. In this feature, we speak to Mandar Thakur, the COO of Times Music in India. As well as representing its own large music catalog, Times Music sub-publishes in India for companies such as Warner Chappell Music and peermusic. World Leaders is supported by PPL.

Mandar Thakur’s designation as the Chief Operating Officer at Times Music does not quite showcase the range and depth of knowledge he has as a veteran of India’s music industry.

For over two decades, Thakur has been both witness and catalyst to its evolution and today, he retains his bird’s eye view through his seats on the boards of royalty collection organizations the Indian Performing Rights Society (IPRS) and the country’s Phonographic Performance Limited (PPL ), plus music distribution company Phonographic Distribution Limited (PDL) and trade body the Indian Music Industry (IMI), which represents the interests of over 200 labels.

It’s no wonder then that he’s a favorite with organizers of music conferences around the globe who are looking for someone with their finger on the pulse of what it’s like doing business in India.

Mumbai-based Thakur’s career started at the turn of the millennium when he was just getting out of his teens. His first job (of sorts) was being a roadie for Indian glam rock band Hazzard, a stint that led him to become a lighting designer specializing in rock concerts.

This in turn got him a gig as the manager of hard rock band Krysis. These experiences, he says, taught him his first big life lessons. “It’s not about what you do, it’s about knowing people,” Thakur told MBW. “You need to have an inherent curiosity for people that amaze you. You need to be awed by any little thing they may have, their talent, skill [or] personality. ”

Next, Thakur followed Krysis’ lead singer and close friend Suraj Jagan to Hong Kong. There, he hustled his way into working with concert promoter Anders Nelson at The Entertainment Company for which he helped put on shows by the likes of INXS and Elton John.

“That’s the [next] thing I learned: till you ask, the answer is always no, ”says Thakur. Upon his return to India in the mid-1990s, he took up the first of his career-defining roles, at MTV Rival Channel [V] where he was the head of music and talent industry relations.

“That was [one of] the most amazing experiences of my life. Everything we did was path-breaking, from a top ten chart to a compilation album, road shows and the Channel [V] Awards, which we held three years in a row and for which [we brought] the Spice Girls, Bon Jovi, Air Supply, Led Zeppelin and Bryan Adams. ”

A change in ownership prompted him to seek his next challenge in 2000, which turned out to be at an enterprise co-founded by former rival, Sudhanshu Sarronwala, who was then the managing director of MTV Asia.

Thakur’s move to erstwhile digital music services provider Soundbuzz “was a hard flip into the deep world of technology, business and music licensing”.

After Motorola acquired (and subsequently shut down) Soundbuzz in 2008, Thakur shifted to consultancy for a couple of years. Among his clients was media conglomerate Times Group who enlisted him to steer a “digital pivoting strategy” for Times Music.

In 2010, they offered him the full-time position of Times Music’s COO. “I remember mentally telling myself, this will be a three-to-four year thing.”

Among his achievements at Times Music – his longest employer thus far – are developing the publishing business in India (“We represent Warner / Chappell and peermusic here”) and taking a forward-looking bet on the regional Indian language and pop market in 2017 through an investment in Punjabi label Speed ​​Records (“Today, we own 25 to 30% of the Punjabi market”)…

What’s been the most exciting development you’ve witnessed in the Indian industry over the years?

The very tectonic shift away from Bollywood. It’s a long path but we’re on the path. We’ve crossed the short term; it’s here to stay. We’re building a pop industry. That’s number one.

Number two, I’m not at all surprised about the proliferation of video in India. We’ve grown up on Chaya Geet (a 1970s and ’80s Indian television program on public service broadcaster Doordarshan that showed clips of songs from Hindi films). We were always a video-ready audience. When everybody thought YouTube is the Mecca, I think the short format video revolution has kickstarted things even below the YouTube layer.

“[There’s] a tectonic shift away from Bollywood… We’re building a pop industry. ”

I think the proliferation of YouTube and then short format video has a much bigger cultural significance than music. That one guy [on a short video app]even if he was a bathroom singer, today he’s got 10,000 fans.

When you have audiences like that, you’re talking about a different level of relationship. Hence that shift towards liking artists [rather than just songs] will come from that ground floor audience. Because that audience is talking directly to their age [group]. They have no legacy, no labels, nothing.

What’s the biggest misconception about the Indian market across the world?

That everybody comes in thinking, ‘Oh my god, 1.4 billion people,’ when to tell you the truth, 50% of them are wondering where their next meal is going to come from, not the next genre of music to listen to.

As a subset to that, our audience size [for monetized media] is 700 million people, not more, out of which 400 million to 500 million is your music-consuming population.

“To tell you the truth, 50% of [India’s population today] are wondering where their next meal is going to come from, not the next genre of music to listen to. ”

The second misconception is that India [can be treated as] one country. India is like a continent. Some of us do not even look like each other; some of us do not talk in the same tongue.

It’s not about breaking into India, it’s about what part of India you break in. You [have to be] aligned to a multi-sliced, multi-territorial society. That’s the only way to look at India.

What’s your take on Indian music crossing over?

There are two very distinct things: One is a crossover [within India] and the other is Indian music having a worldwide audience [in terms of] sheer numbers.

What we’re seeing [so far] is the sheer size of the populace accessing [YouTube] and that sheer uptake driving the numbers [of consumption] up. I’m very happy it’s happening.

“Crossing over [globally] is fundamentally what BTS has done. Or Latin music. Indian music selling in foreign lands to Indians; [it] is not crossing over. ”

In my mind, crossing over [globally] is fundamentally what BTS has done. Or Latin music. Indian music selling in foreign lands to Indians; [it] is not crossing over.

I do believe that today we are in a place where we can cross over. I do not think that is happening with any [major] Bollywood names.

If it happens… I know the Punjabi guys, a lot of labels, particularly international ones, are trying to do writing camps and collaborations and engineering some of these. If 15 of those come out, maybe two will have some kind of impact.

Several Indian industry organizations have the same people on their boards. Is there a dearth of top music management? Also, there’s not a single female-identifying member with a board seat at any of the main trade orgs. There’s clearly a huge diversity issue.

Here’s the thing. Our industry was under the shadow of Bollywood. And there were a few people who ran the industry. But today [that’s less true], if you look at the constitution of the boards. It’s after a lot of effort by three or four people [at the largest companies] that we’ve got this all together.

[But] in the FMCG world, if you have an FMCG [industry] board, do not you think a P&G, Nestle and three or four [other large companies] will have to be on it? Likewise, four or five music companies have to be on each and every board because 90% of the turnover is from those labels. The ability of the little labels to survive is because these big guys are doing that much business, creating employment.

We’re a fucking mess when it comes to diversity [at the trade orgs]. A lot of [individual] labels have women working for them: at Times Music, about 60% of our staff is women. In my leadership team, 70% are women. Almost every lawyer in the business is a woman, [including those] at Universal, Times Music, Radio Mirchi, Gaana, Sony Music, IMI.

[Improved diversity on trade body boards] is just a matter of time. [But so far] we’ve been terrible at diversity, probably the worst in the world. I agree that we [need to] do something in the very immediate future.

What’s the one thing you’d change about the industry overnight?

There is not really one thing. What I would change is the maturity of the writing caliber of artists. I believe we’re not spending enough time on developing artists.

IN [also] wish we had enough government support as an industry, and the powers that be see us as an employment force and people who create entertainment for many, many lives.

Lastly, I really wish the DSPs create a subscription market [in India] because the way I look at it, a lot of people are going to run out of venture capital money and that will almost destroy themselves and some part of the record industry.

World Leaders is supported by PPL, a leading international neighboring rights collector, with best-in-class operations that help performers and recording rightsholders around the world maximize their royalties. Founded in 1934, PPL collects money from across Africa, Asia, Australia, Europe, and North and South America. It has collected over £ 500 million internationally for its members since 2006.Music Business Worldwide