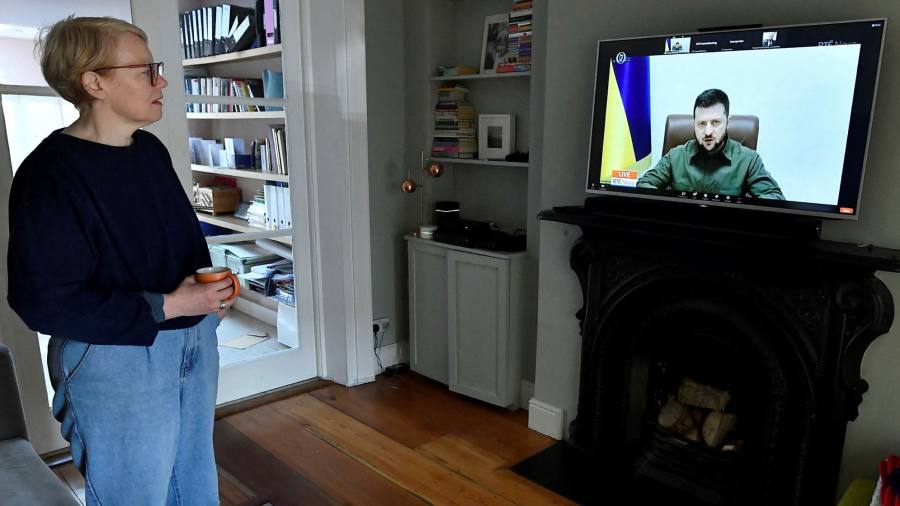 On Tuesday, Russia’s new AntiFake TV show aired on the most popular Kremlin-controlled television channel. Superimposed on the horrifying images that have emerged of Ukrainian civilians lying dead in Bucha’s streets was the word “FAKE”.

As the TV hosts accused Ukraine of colluding with western media by hiring “poorly-trained actors” to play victims in the town near Kyiv, the western media itself was sounding unusually consistent. Just when it felt like no one in the culture-war-ravaged west could agree on anything any more – in the US the majority of Republicans still believe the 2020 election result was fraudulent – suddenly it appears that they can, at least sometimes.

In the news coverage of Ukraine one finds oneself in the unusual position of encountering the same facts – and the same horror – on all sides of the political spectrum. Whether you look at Fox News or CNN, the Guardian or the Daily Mail, the same kinds of words are being used to describe Russia’s actions: “atrocities”, “terror”, “carnage”, “savagery”.

Putin seems to have inadvertently produced a most unusual thing in today’s polarized world: a consensus. The awful reality of a bloody military war has made many of our own squabbles seem insignificant, petty, and even self-indulgent – engaging in Twitter spats or online pile-ons is not a luxury you can afford when your country is being bombed and you are forced to flee your home.

A level of unity and commitment that might have seemed unthinkable just two months ago seems to have emerged, helped by the consistency of the news coverage. In the US, where 70 per cent of Republicans and 71 per cent of Democrats report having heard or read a lot about the invasion, positive views of Putin have plummeted. Only 7 percent of Republicans say they have confidence the Russian leader will do the right thing, according to the Pew Research Center – down from 31 percent during Trump’s presidency – and 5 percent of Democrats.

In Britain, nine out of ten people say they are keeping a close eye on developments in Ukraine, with defense and foreign affairs having jumped to the top of the list of issues they are most concerned about for the first time in over six years, according to to Ipsos.

If Putin was betting he could exploit the ideological divisions that have polarized many countries in the west, that gamble appears to have backfired. “If [Putin had] waited a few more years, just done nothing. . . there is a good chance that Europe and the United States would have self-destructed, due to their internal conflict and culture war, ”historian Yuval Noah Harari told Sam Harris on the latter’s Making Sense podcast. “With his own hands, he has united them and he’s given them a chance to save themselves.”

What can we learn from all this? Is what we’re seeing simply a case of people coming together, temporarily, around a common enemy? That is definitely part of it – both Americans and Britons now say they regard Russia as a threat to their security.

But Angela Nagle, author of Kill All Normies: Online Culture Wars from 4chan and Tumblr to Trump and the Alt-Right, suggests another reason: the west’s self-image as ever-wealthy, ever-safe and ever-powerful has been called into question.

“You can not sustain this image of yourself as the eternally world-dominating power if you’re also worried about gas running out and keeping the basic functions of society running,” says Nagle. “When you’re in a decadent phase you can indulge in ideas of. . . ‘we should think about all of the bad things we’ve done in the past’. . . A perceived threat of invasion [shakes] people out of that way of thinking. ”

It is worth noting that those who criticize some of the excess of these now-subdued culture wars, who are often dismissed as mere “contrarians”, have – with some notable exceptions – largely produced analysis consistent with the mainstream narrative during this conflict.

There might be another lesson to be drawn from all of this as well. In recent years many on both the right and left have become embroiled in a culture of “competitive victimhood”. Ukraine has shown the world not only what genuine victimhood looks like, but also the value of true heroism.