How to Use Apple Music Sing 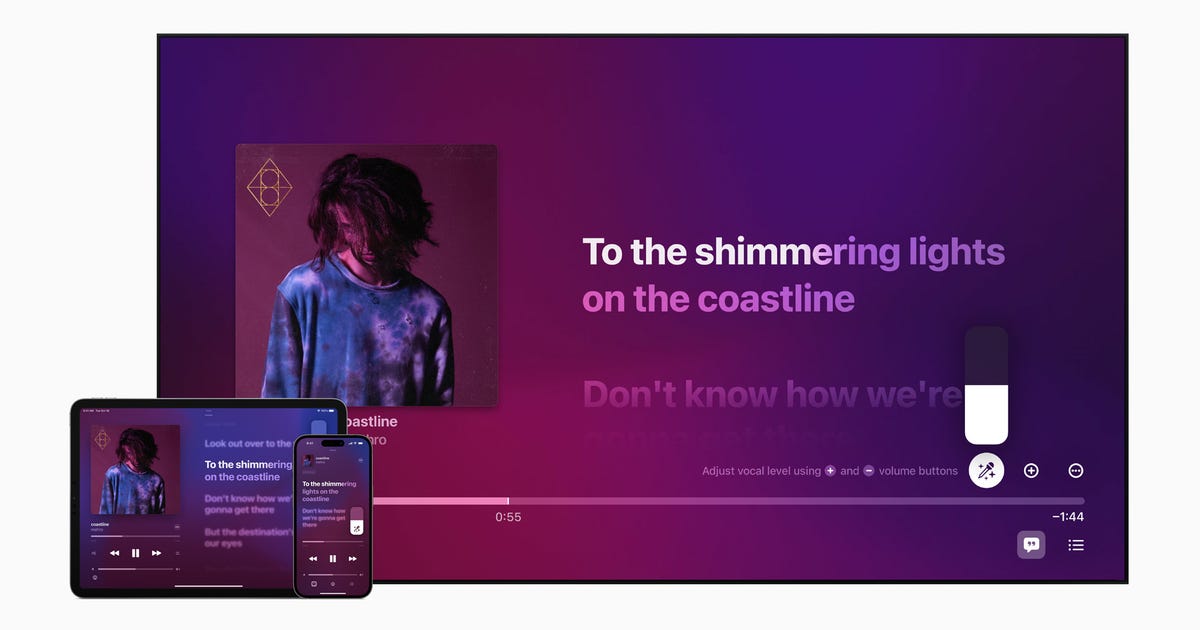 Apple Music Sing is a new karaoke mode that lets subscribers sing along to their favorite music with real-time lyrics and adjustable vocals. Sing is a part of the Apple Music streaming service, and it has debuted alongside 50 dedicated playlists. Here’s what you need to know.

One fun element of the updated Music app is that you’ll be able to sing duets and backup vocals, with separately animated lyrics.

“Apple Music’s lyrics experience is consistently one of the most popular features on our service,” Oliver Schusser, Apple’s vice president of Apple Music and Beats, said in a release. “We already know our users all over the world love to follow along to their favorite songs, so we wanted to evolve this offering even further to enable even more engagement around music through singing. It’s really a lot of fun, our customers are going to love it.”

The feature is available to Apple Music subscribers on iPhones and iPads right now. It’s due to arrive on the Apple TV 4K streaming box later in December, but there’s no word yet as to whether third-party devices will be supported.

@cnetselects Here’s how to use Apple Music Sing — a new karaoke feature for Apple Music that rolled out with iOS 16.2 🎶🎤 Will you be trying this out? #applemusic#applemusicupdate#applemusicsing#applekaraoke#karaokeoniphone#ios16updates#ios162#ios16tipsandtricks#appletips♬ original sound – darcy stokes

Get your karaoke on

Firstly, the feature is only available to users who are running iOS 16.2 on iPad or iPhone, and who also have the latest version of the Apple Music app.

To access the karaoke feature, you first need to open a song you want to hear, whether it’s from the dedicated Sing playlists or any song in your catalog. For the record, every song we’ve tried so far is compatible, as long as it has real-time lyrics — even the ones in Dolby Atmos.

Once your song is loaded, click on the speech bubble in the bottom-right corner of the play screen to bring up the real-time lyrics.

At the top of the screen you’ll see a volume slider with a microphone on it — sliding this up and down allows you to adjust the level of the vocals.

And that’s it. There’s no official support for microphones or even recording your efforts — yet. However, we’ll update this once the Apple TV version drops. Will Apple TV support the Siri remote? Or a Bluetooth headset? Who knows? Apple did not respond immediately to CNET’s request for comment.

What kind of witchcraft is this?

How does it work? Basically, lead vocals are usually mixed to the center so they’re easy to remove with most modern audio software. But there is definitely more to it than that, as songs with vocals in left, center and right positions such as Dinosaur Jr.’s Feel the Pain also worked in our tests.

Apple Music Sing is another compelling feature for the service, which boasts over 90 million tracks, plus Dolby Atmos and lossless music. Competitor Spotify has 80 million songs but doesn’t have lossless music yet.

In case you’re wondering, the song in Apple’s promo image is Coastline, by indie musician Mehro.