How the McCarthy stalemate is playing on Fox News 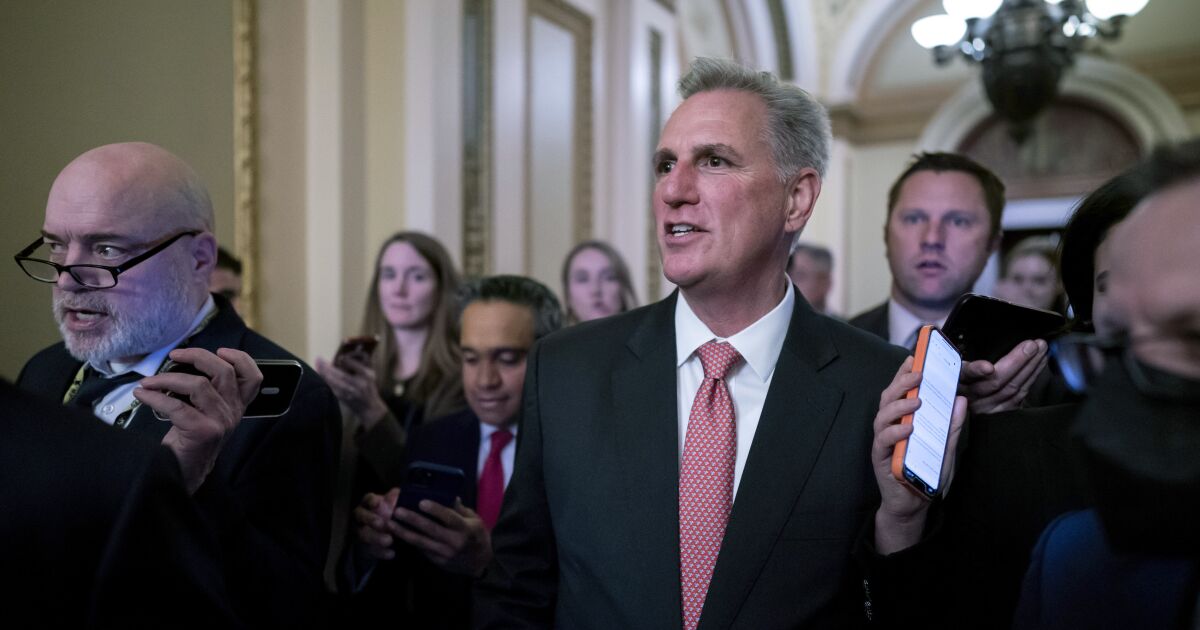 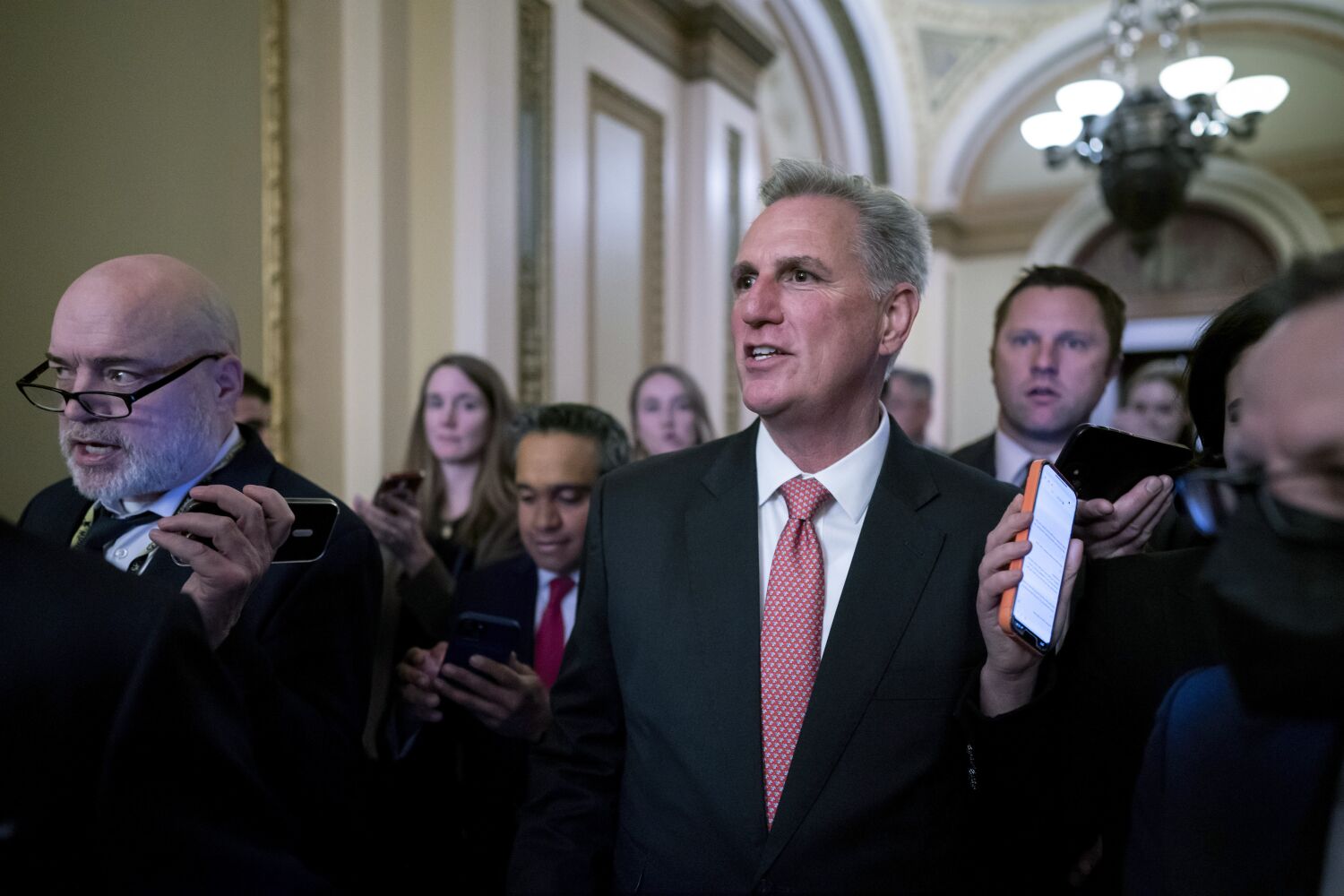 Faced with one of the nastiest political train wrecks in modern memory, America’s conservative media stalwarts responded this week with recrimination, regret, reflection — and at least one suggestion that House Republican stalwarts might find solace, and a new leader, by getting good and drunk.

A week of party infighting over who should be the next speaker unspooled on live television even as much of the media establishment on the right coalesced around Rep. Kevin McCarthy, the Bakersfield lawmaker who has coveted the House’s top job for years.

Even former President Trump and a super-majority of hosts and guests on Fox News — the most powerful platform on the political right — could not provide the leverage that McCarthy needed to win the 218 votes needed to make him speaker.

After 11 stalemated ballots this week, GOP opinion makers on TV, radio and online spoke with a single voice on only one point: They’d much prefer to be hammering President Biden and other Democrats on issues such as the surge of immigrants crossing the southern border, inflation and first son Hunter Biden’s financial entanglements.

“Grow Up!” read the headline on the front page of the New York Post on Wednesday, over a picture of two of the most outspoken foes of a McCarthy speakership, Reps. Matt Gaetz (R-Fla.) and Lauren Boebert (R-Colo.).

Inside the tabloid, owned by Rupert Murdoch’s News Corp., columnist Michael Goodwin urged Republican lawmakers to “stop this madness and go after Biden.” He accused the dissidents supporting McCarthy opponents of engaging in “a fool’s errand masquerading as an act of principle.”

Goodwin’s views would be seconded throughout the day Wednesday and into Thursday in the House, where the refusal of 20 Republicans to back McCarthy prevented him from claiming the job that is second in the line of succession to the presidency.

Longtime Republican strategist Karl Rove said on Fox that the rare leadership deadlock was “an utter, unmitigated disaster,” adding that “chaos tends to bring about chaos.”

Former GOP Speaker Newt Gingrich told Fox Business’ Larry Kudlow that the leaders of the revolt were “throwing the equivalent of a temper tantrum, with no workable plan to resolve the crisis.” He appealed to viewers to call lawmakers blocking the McCarthy advance to make clear they believe their campaign is “so destructive and, candidly, so stupid.”

That sort of sentiment extended from morning to night on the top-rated cable news station. A “Fox & Friends” morning host scoffed at the notion that “these 20 think that they can change the minds of the 200” House members voting for McCarthy.

Speaking to Fox’s Martha MacCallum, Rep. Tony Gonzalez (R-Texas) heaped particular scorn on his 20 colleagues who had ignored a strong admonition by Trump to end the deadlock and back McCarthy.

“I’m a little upset,” Gonzalez said. “Here we had President Trump come out with a very powerful endorsement of Kevin McCarthy, and you have 20 members of our caucus [who] essentially thumbed their nose at the former president saying we are … above the party and the direction of this country.”

He then talked about the urgent needs of the border district he represents, adding: “America has real problems. The American people are the loser in all of this chaos.”

Outside Fox, columnist and podcaster Ben Shapiro said Wednesday that while he did not have a personal opinion about McCarthy becoming speaker, he rejected opponents who did not present viable alternatives. He said their strategy was to “run directly into a wall shouting. “

On Thursday, Shapiro praised one of the dissidents, Rep. Chip Roy (R-Texas), for extracting a concession that would allow more scrutiny of spending bills.

Still, Shapiro suggested via Twitter that a failure to resolve the situation could lead to an extraordinary “counterplay” that “could take the form of Republicans and Democrats voting to appoint the speaker by plurality rather than majority.”

“If that happens, this puts the Never McCarthy group in the position of either voting for McCarthy, or letting [Democratic leader] Hakeem Jeffries become speaker,” Shapiro said.

Closer to home, McCarthy’s Republican support appeared to mostly hold. The Bakersfield Californian reported that the politician’s allies believed he was being mistreated by rabble-rousers who had no clear agenda.

The newspaper quoted Republican strategist Cathy Abernathy, who accused the anti-McCarthy lawmakers of “crazy behavior” mainly designed to “gum up the works” rather than achieve clear goals.

The Californian also interviewed Rep. David Valadao (R-Hanford), who depicted McCarthy as being warmly received by the vast majority of the House Republican caucus during a closed-door meeting. At the same meeting, Valadao said other Republicans yelled at the naysayers: “What do you want? Answer the question!”

Concluded Abernathy: “You don’t let the troublemakers push aside the good people.”

But the Republicans who said they wanted more of a say in leadership, budget and other matters found a friendly forum from another familiar voice in the Central Valley.

Former restaurant owner and Bakersfield City Councilman Terry Maxwell told his listeners on KNZR radio that McCarthy wouldn’t be in such a tight leadership fight if he had “done a better job of getting more people elected” in November’s midterm election.

“What’s wrong with [the rule that] you have to get 218 votes to become the speaker?” Maxwell asked. “It’s going to force the majority to listen, instead of squashing the little guy.”

Seconding that emotion was one of the highest-rated personalities on Fox, Tucker Carlson, who told his audience the night before the third full day of debate that the extended infighting was the mark of a healthy democracy.

“If you prefer democracy to oligarchy, if you prefer real debates about issues that actually matter, it’s pretty refreshing to see it,” Carlson said.

Speaking on Fox’s “America Reports,” Rep. Roy insisted that higher principles — like reining in over-the-top spending and honoring the views of the political minority — were at stake.

“What I’m not going to do is blindly do what the swamp does,” Roy said. “My constituents didn’t send me here to do that. Is anybody listening to this actually happy with what Congress is doing? Is anybody out there? Are you? Or anybody in America, do you think Congress is doing a good job? The answer is ‘no.’ ”

Fox’s highest-rated program, the panel show “The Five,” sought after days of deadlock to mostly avoid the Republicans’ internecine meltdown.

On Wednesday, the group instead focused its gaze mostly on a series of ideologically charged topics: the purportedly easy life provided to homeless people by weak-minded liberals in Portland, Ore.; the purported mistreatment of a restaurant employee who defended herself against a violent customer; the scourge of a country where, as an on-screen graphic suggested, “Americans No Longer Want To Work Hard.”

When the five talkers finally turned to the Republican gridlock, they did it with a series of one-liners.

Dana Perino, a White House spokesperson under President George W. Bush, offered that there was “only one solution that they should do tonight, which is …”

“Yes! Everybody needs to go the bar,” Perino said. “And it needs to be an open bar, and they need to all get drunk and then have a moment. Because that’s what you do with the team when you’re having a bit of a problem. I’m not saying — look, actually, yes, I am saying. Go get drunk.”

Tammy Slaton: I Married My BFF, And It’s Amazing!