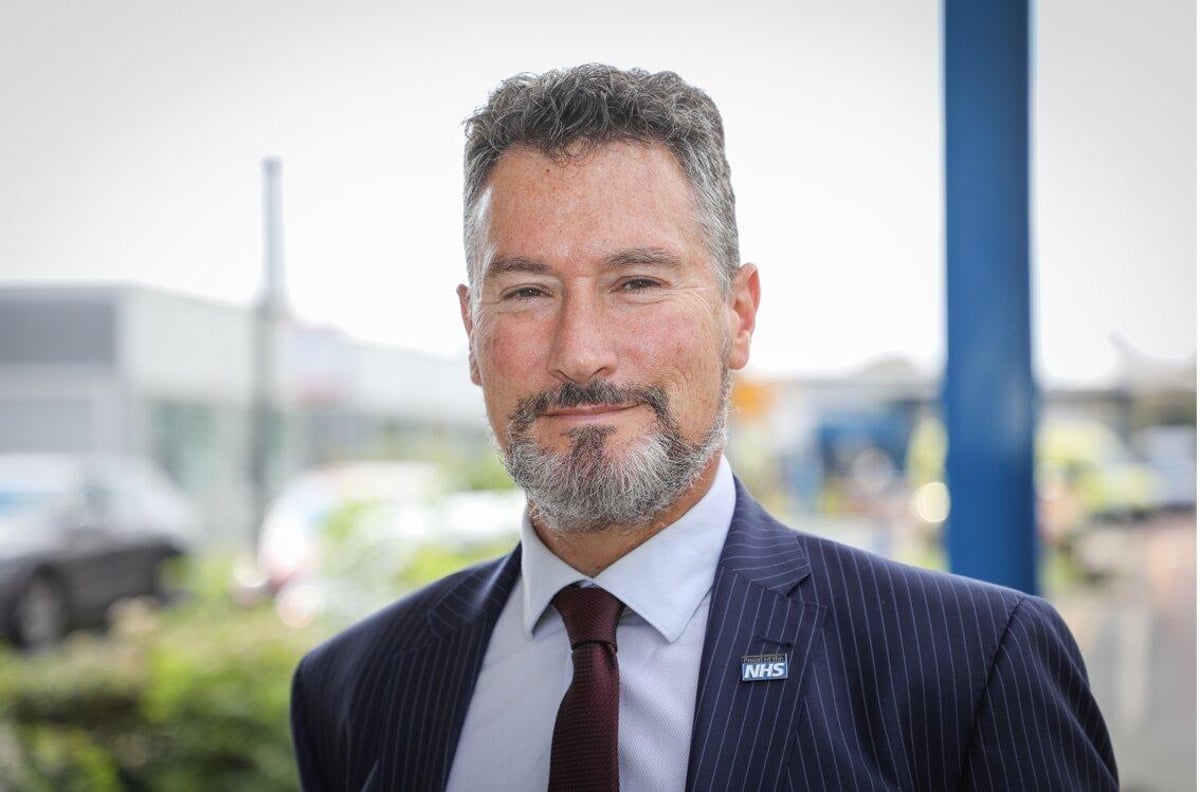 Kevin McGee, chief executive of Lancashire Teaching Hospitals NHS Foundation Trust, said that ending the “postcode lottery” of waiting times across the county could help clear the backlogs that have built up because of the pandemic.

While he stressed that it would be entirely down to individual patients whether they took up the offer of being treated at another hospital, he said that the willingness and ability of some people to travel had served to support a recent drive to eliminate the numbers waiting two years or more for an appointment.

Mr. McGee told the Local Democracy Reporting Service (LDRS) he believed that it would become a more regular conversation to be had with patients as the NHS in Central Lancashire turns its attention to clearing the thousands of other long waits resulting from Covid-related disruption to services .

Kevin McGee, chief executive of Lancashire Teaching Hospitals, suggests that there are local and Lancashire-wide solutions to long waits at the Royal Preston and Chorley and South Ribble Hospital

However, he also revealed how Preston and Chorley hospitals plan to reduce their own waiting times for the majority of people who will still want, or need, to stay local – including by trying to ensure the Chorley site is shielded from seasonal and ongoing Covid pressures and can continue to deliver routine procedures all year round.

A fifth of all Preston adults still unvaccinated against Covid-19

All NHS trusts were set a national target of eradicating their two-year waits by the end of June. LTH had around 1,100 patients in that position in late February – and the trust’s latest board meeting heard that it had reduced that total to 418 by the end of May.

Mr. McGee said that the organization was now left with what he described as “a very small number” of the most complex cases within that cohort who were yet to receive their treatment.

“I am very proud of the work we have done… to reduce that number down to a handful or so. We’re not giving up, we’re still trying to find options, but there [are] a small number of patients that we’re still working on and trying to get dates for in June – if not, they’ll be [seen in] July, ”he explained.

The next recovery challenge for trusts like LTH is to clear the number of people waiting longer than 78 weeks by next April – and then all those waiting over a year by March 2025. In Central Lancashire, those figures stood at 2,268 and 7,478, respectively, in April – but more are always at risk of being added to the tallies even as others are treated and removed from them.

It is as part of the mammoth effort that will be required to realize the national vision to eliminate all waits longer than a year that Mr. McGee sees patient choice playing a part.

Under the NHS Constitution, patients have the option, in most cases, to select any hospital in England where they would like to be treated – perhaps influenced by waiting times, or just for reasons of personal preference. In reality, however, it is a little-known right and most will be seen at their nearest hospital.

Moreover, he said, many patients at Preston and Chorley hospitals had welcomed the option to be treated at another facility in the county when it was offered to them – and he added that it showed the benefits of the four trusts making the best use of their collective capacity given the pressures facing the NHS as a whole.

“A few people [have] just said, ‘No, I’m happy to wait, I want [to be treated] at the local hospital ‘- and we respect that and we will get those people in as quickly as possible.

“Other people have been delighted to travel, because [they] have got their treatment quicker – and those conversations, I think, will happen more and more. ”

Mr. McGee said that such “transformational” change was needed within the NHS in Lancashire in order to tackle the Covid-realted backlogs in pre-planned – or elective – care.

Last year, in his previous role as joint chief executive of the Blackpool and East Lancashire NHS trusts, he floated the idea of ​​a shared waiting list in the county during a meeting of the Lancashire and South Cumbria integrated care system.

He told the LDRS that while that had not yet come to pass, there was now “joint waiting list management” in an attempt to level out waiting times across Lancashire.

“What you can not have is [as a fictitious example] Morecambe Bay undertaking 52 week waits in ENT [ear nose and throat]when we’ve got 78-week waits in Preston.

“We’ve got to get everybody to the same level so that we equalize all the numbers down – and that’s what we’re trying to do and that would mean the trusts working together.

“We can not have a postcode lottery where people in one bit of Lancashire get treatment less quickly than elsewhere.”

Mr. McGee said that while people would want their urgent and emergency care services based locally, they were more open to “traveling a little bit further” in order to receive pre-planned treatment sooner. However, he acknowledged that some patients would require travel support in order to be able to make that choice.

He also told the LDRS that work was afoot within the trust to reduce waiting lists in Central Lancashire itself, rather than just relying on the benefits of sharing capacity more widely across the county.

Next month, a new 25-bed “modular” ward is due to open at Chorley and South Ribble Hospital. To be known as the Cuerden ward, it is designed to assist with patient flow through the hospital system and provide additional space for those who may be close to being discharged.

The Euxton Lane site also saw the opening of three new theaters last year and Mr. McGee said the intention is to ringfence Chorley Hospital for more elective work – so that day-to-day procedures do not fall victim to the vagaries of demand for urgent services.

“What has happened over the last few years – particularly in winter when the pressure is in the emergency pathway and it becomes really difficult – [is that] some elective work is stood down as a consequence.

“We can not afford to get into that situation again, so what we are trying to do is to ringfence elective capacity and separate it from the emergency flow,” Mr. McGee said, in an echo of an idea first mooted in 2018 as part of plans to redesign healthcare services in Central Lancashire.

Asked whether he was depressed by the position the NHS finds itself in as a result of the pandemic’s disruption, Mr. McGee said it was “certainly where none of us wants to be”.

However, he said he took heart from his experience in the service 20 years ago when a focus on tackling long waiting lists led to them being slashed from two or three years, in some cases, to months and weeks.

He also said that the very way in which the NHS dealt with the depths of the Covid crisis was proof that it had the ability to recover from the legacy of long waits that the virus has left behind.

“We literally turned the service round in a matter of a couple of weeks to deal with the pandemic at the very start. Then, when it became obvious that the way out of the pandemic was, firstly, testing and then vaccination, we completely turned the NHS on its head to be able to deliver that – and we did it successfully.

“Now, although we’ve still got Covid numbers in hospital, we’re into restoration and recovery – and again we’re turning things [around] and having a real focus on what needs to be done.

“I know the NHS comes in for criticism – and we certainly do not get everything right – but when the NHS puts its collective weight behind something, it really does deliver.”

In common with NHS trusts up and down the country, Lancashire Teaching Hospitals (LTH) is currently facing a raft of waiting time pressures as it attempts to get back on a firm footing after the pandemic set back its performance against a series of key targets.

Central Lancashire’s waiting time statistics currently paint a mixed picture. According to figures presented at the LTH board meeting earlier this month, the trust saw 77.5 percent of patients attending its accident and emergency department in April within the national four-hour target – higher than the England average and putting it fourth out of 19 acute trusts in the North West.

Ambulance handover delays of 60 minutes or more also fell in April – down to 199 from 321 the previous month.

Elsewhere, however, the strain in some services is showing in the statistics – particularly in relation to cancer.

Chief operating officer Faith Button told this month’s board meeting that the service “isn’t recovering at the pace that we expected it to”.

She added: “Demand is extremely high, particularly in colorectal at the moment – they are seeing double the amount of referrals coming through.” .

The North West region as a whole has seen a bigger bounce back in demand for cancer services than any other part of the country, LTH chief executive Kevin McGee told the LDRS.

Board members were told that pressure on diagnostic endoscopy tests was exacerbating the 62-day performance – although these were still being carried out within two weeks for cancer and other urgent patients, but with routine patients facing longer waits.

A bid for funding for a third endoscopy room at the Royal Preston is now being prepared and Ms. Button said that three-session days for the procedure would begin in October.

The trust is currently aiming to reduce the size of its cancer treatment backlog to pre-pandemic levels by next March – and action plans for different types of cancer are monitored each week.

In April, 48.7 percent of patients waited longer than the standard six weeks for a range of diagnostic tests, but the board heard that it was hoped that plans for community diagnostic hubs across Lancashire could help ease the pressure.

Kevin McGee told the LDRS that the trust was looking to make “more efficient use” of all its current diagnostic capacity – including by extending the working day and week.

He added: “Staff are working really hard and a massive thank you to each and every one of them. I’d also like to say thank you to our community and patients, because they have borne with us.

“It’s really upsetting when we see some of the long waits for elective care and in the emergency department.

“And that’s why we are absolutely committed to ad eradicating long waits for elective and [also] cancer work. ”

Trust vice-chair Tim Watkinson told the board meeting that members were “concerned with the position that we’re in”, but were “assured by the actions we’re taking as a trust to manage in very difficult circumstances”.