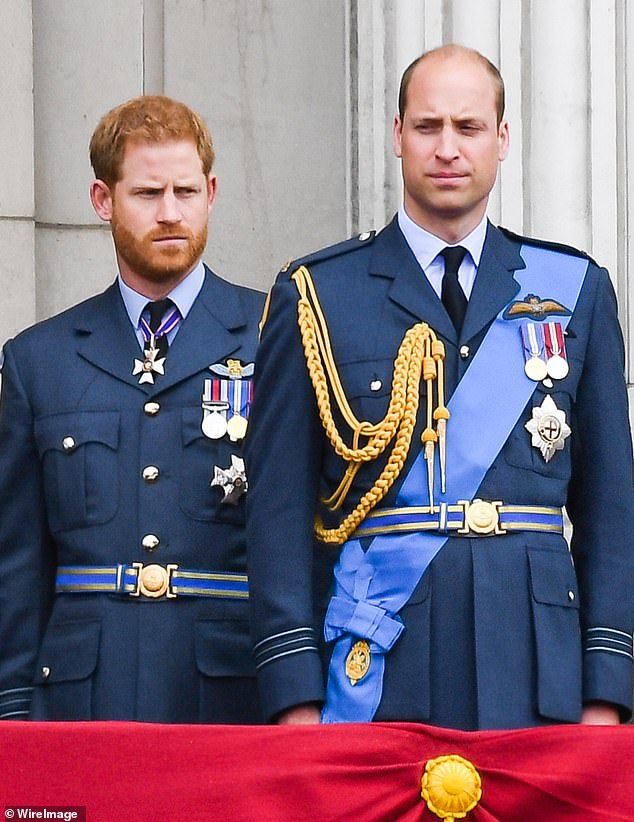 Prince Harry was not quite eight when Andrew Morton’s seminal biography about his mother hit the bookshelves in the summer of 1992.

Diana: Her True Story, was a publishing sensation, a worldwide bestseller that tore away a carefully curated image of royal happiness to reveal that the marriage of the Prince and Princess of Wales was a sham.

Morton’s shattering account of how the public fairy tale had become a private nightmare and how Diana was tormented by her husband’s relationship with Camilla Parker Bowles was to have a profound and lasting impact on the Royal Family.

Greeted initially with disbelief and derision, the book rapidly became a classic, not just because of its explosive content but also because of Princess Diana’s intimate involvement in its publication. After her death in 1997, Diana was revealed to have been the main source and a new version of the biography contained an 18,000-word transcript of tape recordings made by the Princess in secret to enable Morton to tell her story.

Harry and William appear together to view a Buckingham Palace flypast on July 10, 2018

Thirty years on from that publishing landmark, Diana’s son is set to follow in his mother’s footsteps with a memoir that is poised to shock the world just as hers did.

This time there is no subterfuge. Diana publicly disavowed any cooperation and even distanced herself from some of the author’s sources, friends whom she had originally encouraged to help him in the first place.

Harry has resorted to no such trickery. His, he has promised, will be an ‘intimate’ and ‘heartfelt’ account of the ‘experiences, adventures, losses and life lessons that have helped shape him’.

But what does that mean and, more importantly, what does it mean to the royals whose lives have been damaged by the saga of Harry and Meghan as they once were by the wilful Diana?

Understandably there is considerable anxiety in Buckingham Palace circles that Harry, 37, will use the memoir to settle perceived scores with family members and senior courtiers.

After her death, it emerged the primary source for Diana: Her True Story was Diana herself

They are particularly nervous about his attitude towards his stepmother, the Duchess of Cornwall, the women who many of the late Princess’s supporters still blame for the collapse of the Charles-Diana marriage.

Five years ago, long before he had thought about writing a book, Harry invited friends of his mother to share memories and private photographs of her.

Initially, he said it was because his own recollections were a little shaky. He especially wanted to know the background to the breakdown of the marriage of his parents, whose wedding was 41 years ago yesterday and which they had gone to great lengths to protect him and his brother William from. With some of Diana’s intimates he was more explicit. One at least had a lengthy discussion with him about Camilla.

‘It was pretty clear that he did not have a high opinion of her,’ the friend later told me. ‘He wasn’t very complimentary about her and I very much doubt he forgot what we talked about that day.’

It was meeting the handful of Diana’s friends around the time of the 20th anniversary of her death — and hearing their experiences of her misery — that opened Harry’s eyes to what he considered his mother’s ill-treatment, not just at the hands of the hated media but also by the royal household, the institution that Harry also holds responsible for many of his own grievances.

When Penguin Random House announced it had secured the rights to Harry’s life story, it said the book would cover his childhood in the public eye, Army career and front line service in Afghanistan as well as marriage to Meghan and becoming a father to Archie, three, and one-year-old Lilibet.

That is a wide and compelling section of his life. Unspoken, of course, is how all these aspects intersect with his royal life.

Indeed, it is almost impossible to see how he can truly separate these areas from his experiences as the son of the heir to the throne and brother of the next in line.

It is the disintegration of the bond between him and William over the past three years which has so alarmed courtiers. They are, I am told, unimpressed by Harry’s bold assertion that he has written the book ‘not as the prince I was born but as the man I have become’.

Why? Simply because Harry has made so many empty promises in the years since he chose comfortable exile in California over duty and service to the Crown. ‘If this is meant to convey some kind of reassurance that he will not be telling tales from within his privileged position inside the Royal Family, then people are not convinced,’ says one figure who has known Harry most of his life.

So we are likely to read of Harry’s take on what happened to his father and mother and something of its impact on his childhood. But that is bound to be overshadowed by the devastating effects of Diana’s death when he was 12.

Surely no autobiography can avoid examining his feelings that terrible weekend in August 1997 when he awoke to learn that his mother had been killed in a Paris car crash. He has already touched on this in interviews describing how he failed to deal with the consequences for years and how it led to a period of ‘total chaos’ and a near ‘total breakdown’ in his 20s, until he sought counselling.

There is sure to be a recollection of walking behind his mother’s coffin on the day of her funeral with the eyes of the world on him. He has already given a clue to what his thoughts were, when he told the U.S. magazine Newsweek: ‘I don’t think any child should be asked to do that, under any circumstances.’

It will be fascinating to learn if Harry decides to say who asked him to do it and what choice, if any, he was given.

Many are also wondering if it will shed light on how Diana Spencer’s family supported the Prince and his brother in the months immediately after their mother’s death. The Princess had, for example, already chosen and bought the present she intended for Harry’s 13th birthday, but it was her sister Sarah who wrapped it up and gave it to her nephew just two weeks later.

How Harry chooses to relay the ‘party prince’ years, when he was living it up in London nightclubs and experimenting with drugs and excessive amounts of alcohol, will be equally intriguing.

Those teenage years when he was off the rails, drinking underage in pubs and smoking cannabis at his father’s Highgrove home (which persuaded Charles to arrange a visit to a rehab centre), will be especially revealing.

Will the period be analysed retrospectively as another aspect of the staggering aftermath of his mother’s tragic death? Or will there be some candour about a young, privileged prince having a blast and doing what many young men in his position would have done?

The answer, in all probability, is likely to be a bit of both.

Of course what are certain to be the most sought-after passages in the book will be when he writes about his brother. This surely is potentially the most contentious issue of all — because of its importance to the long-term wellbeing of the monarchy — and one that will be scrutinised not just for what he puts in, but for what he chooses to leave out.

The Queen leads the Palace balcony ensemble in July 2018, with Harry and Meghan behind

Their relationship has been so damaged by the fall-out from exile and Harry’s endless criticism of the royals, that some question whether it ever can be properly repaired. A score-settling book is not the best way to start. His bombshell accusations about racism in the Royal Family and Meghan’s complaints of abandonment in terms of emotional and financial support, are still painfully, brutally raw.

There are hints of what may emerge. In a podcast, Harry spoke of the ‘genetic pain’ of being raised in the House of Windsor and the manner in which Charles had treated him like a child was ‘the way he [Charles] was treated’.

This sort of confessional language was said at the time to reflect Harry’s brushes with therapy. But they could equally be the words of his ghostwriter JR Moehringer.

Harry’s friends have defended his decision to collaborate on a book as merely doing no more than both his parents did. But there are some subtle differences. Diana’s partnership with Andrew Morton came after 11 years in the public spotlight and when, with her marriage in ruins, she was at the end of her tether.

And while Jonathan Dimbleby’s life of Prince Charles did include some criticism of the Queen and Prince Philip’s parenting skills, it was also an authoritative study of a thoughtful, middle-aged king-in-waiting and his impressive achievements as Prince of Wales.

Harry’s promises to be a much more personal account, one which he says will be ‘accurate and wholly truthful’.

Harry gave an overtly political speech to the United Nations last week, with courtiers fearing he will be similarly unapologetic in his ‘heartfelt, intimate’ memoirs expected in the autumn

It will deal with the two aspects he considers to be his greatest achievements — his life as a soldier and the happiness and stability he has found as a father and husband.

According to Morton, Harry views both the Army and Meghan as his ‘saviours’. With Meghan, he says, Harry was ‘the supplicant, prepared to do anything to bring her into a safe harbour’. Despite the huge secrecy surrounding the book, it is rumoured in publishing circles that the cover may feature a picture of the Duke and Duchess together. This would certainly fit with Harry’s view of the two of them as a team.

This week it was suggested that the memoir’s publication had been put back to avoid clashing with the arrival of former First Lady Michelle Obama’s latest tome. According to reports, Harry’s completed manuscript has been through all legal processes and is ready to cash in on the lucrative Christmas market.

One thing we have learned is that, while the book may indeed be ‘juicy’, it will also be serious and unflinching.

Moehringer, who ghosted the autobiography of former tennis champion Andre Agassi, has spoken of the importance of candour when writing a memoir. ‘Of [those] I’ve read that have failed for me, often the reason they fail is that the writer has decided not to bare his or her soul,’ he once said.

‘You feel the writer is holding back. Part of the pleasure of reading a memoir is feeling that someone is confiding in you, that they are being honest.’ Moehringer, who read up on Freud and Jung in order to unlock Agassi’s psyche, spent around 250 hours talking to his subject.

The result was a book that gripped general readers, not just sports fans. Such incisiveness is unlikely to comfort the royals.

I understand the interviews with Harry were largely concluded by the turn of the year, in other words before the public reconciliation with the Royal Family which occurred over the Platinum Jubilee weekend.

Will the anger which has coloured so many of Harry’s public pronouncements still be visible? Or will this clever writer present a thoughtful and mature prince?

We will have to wait and see.