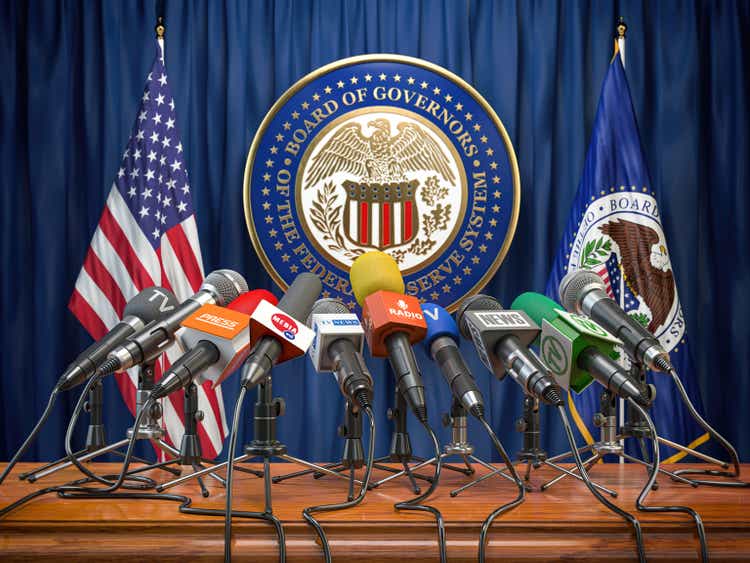 There have been four QE programs conducted by the Federal Reserve since the Global Financial Crisis through March 9th, 2022. We are currently in the after QE 4 period about to begin the first QT ramp scheduled for June 2022. The current “After QE4” time period has been particularly negative and is included in the analysis that follows. The following average returns have been observed in each of the different periods:

As the chart above shows, the S&P 500 could fall another -15% and still be in the positive channel from 2009. Much of this above trend price action stems from record stimulus and extremely accommodative monetary policy after the Covid pandemic. We can estimate that the Federal Reserve’s quantitative easing has provided enormous financial benefits that exceed both the periods without quantitative easing as well as returns in the quantitative tightening period. These strong results confirm that Fed intervention in the markets since the Global Financial Crisis has provided significant benefit and shows why they have returned to this monetary policy four times in the past 13 years. It seems likely the Fed will use QE again in future economic concerns.

Many other factors have certainly contributed to market performance since 2008, but for simplicity of analysis this review paints a broad stroke on Fed intervention and does not consider all possible factors that have impacted the markets during these periods.

There have been four QE programs conducted by the Federal Reserve from the Global Financial Crisis in 2008 through March 2022. The Fed operates QE by purchasing treasuries, mortgage backed securities and agency debt. By far the largest QE program was the most recent from March 2020 consisting of nearly $6 trillion in MBS and treasury purchases.

In this updated article I have separated the QT period parts for a more detailed analysis and added a rate hike comparison.

In the last rate hike regime the Federal Reserve hiked rates nine consecutive times from 2015 before halting at the market lows on December 19th, 2018. So far in 2022 the Fed has conducted one 25 bps hike and one 50 bps hike in the past two FOMC meetings. The 50 bps point move is the largest in 22 years. Every prior rate hike regime since the 1980s has ended with lower highs than the initial target and with lower rates than the previous hiking program. Some attribute this pattern of declining rate peaks to the rising cost of carrying more debt and the inability of any Federal Reserve hiking regime to sustain higher rates that result in the government paying higher debt interest payments. At least one analyst believes the Fed cannot move the Fed funds rate above 1% without having to move back into an easing cycle.

The market expects at least five more rate hikes in 2022 following the Fed proposal with the next two rate hikes likely to 50 bps each. This is the most aggressive rate hike schedule proposed in decades, but it remains to be seen if conditions can sustain so many hikes so quickly.

The chart below shows each of the different easing, tightening, and intervening periods along with the 10 year treasury price, Fed funds rate, and the S&P 500 index. In the period from December 2015 to 2018 the Fed was also increasing the Fed funds rate in nine additional tightening measures. The Fed fund rate has now been increased by 75 bps for the first time since 2016 and may contribute additional impact on the markets.

The correlation between rate hikes and S&P 500 returns indicates that it is not the number of hikes that impacts the market as it is the level of interest rates that suddenly trigger outflows from the market to other securities like bonds. With five proposed rate hikes in the remaining 9 months of the year a similar adverse market reaction could be triggered by the end of the year. However, I submit the larger concern will be the liquidity drain from the Federal Reserve’s aggressive quantitative tightening schedule.

Next we will look at the S&P 500 performance during each these periods as well as the time in between each of these accommodative periods of easing. The purpose is to provide a general forecast of what we might expect now that QE4 has ended and what may occur when the next quantitative tightening period begins in June. Once again I have added more events on the schedule as more information has been obtained.

We are currently in the period After QE 4 and ahead of the June QT ramp 1 up to $47.5 billion per month liquidity drain from the Fed. What should we expect now that we know the Federal Reserve’s proposed QT schedule?

We are two months into the period after the largest QE program since 2008 has ended and only a few weeks away from the largest proposed QT schedule in US history. What should we expect now?

In this update I will be looking at the QT schedule comparison with 2018 to try to anticipate how the reduction in market liquidity may impact markets in 2022. The prior QT schedule of Fed tightening in 2018 correlated strongly with the CBOE VIX volatility index as I wrote about frequently in those years. Members can review Section 10 of the Members’ Library for many more articles and charts.

June through the end of the year may reveal some record volatility as liquidity drains at rates never seen before.

VIX above 32 back in 2018 was considered “Volmageddon” and it knocked out volatility funds into delisting. Moving from 12 to 20 on the volatility index was a very big deal in 2018. The VIX is based on derivatives of the S&P 500 and correlates strongly with S&P 500 price movement.

Below you can see the corresponding VIX volatility chart with the 2018 S&P 500 performance above. What happens in 2022 when QT begins in June and the VIX is already above 30?

Just as we are seeing a major breakdown in the FANG Index stocks MicroSectors FANG+ Index 3X Leveraged ETN (FNGU) in 2022 back to the lowest levels since early 2020, there was a similar breakdown pattern in FNGU in 2018.

In December 2018 the FNGU price finally broke out of the long negative bearish stair step channel as the Fed announced the end of the QT cycle and began cutting interest rates again. I suspect this will be the indicator for 2022 when the FANG mega caps finally breakout of their negative channels since the November 2021 Momentum Gauge topping signal.

The Momentum Gauges® provided the topping signals in 2018 and continue to show strong negative conditions in 21 out of the last 24 weeks into 2022.

Related to this period of tightening in 2018, I conducted a study comparing the VIX volatility to the size of the reduction in treasury securities held by the Federal Reserve. The analysis detailed in articles linked above basically illustrates that the more the Fed reduced asset holdings, the higher the market volatility became:

Currently the Fed holds a large percentage of the treasury market now estimated at over 25% into 2022. This high balance shown below from record amounts of QE4 purchases increases the risk that future tightening events may be longer and more severe than we experienced in 2018.

The next most important phase for the markets will be the June start of the QT asset reduction program. There are no shortage of major economic factors that will continue to impact the market performance for 2022 and beyond. Inflation measures are at the highest levels in 40 years. The US GDP missed estimates in Q1 and moved into contraction even as GDP outlook is being revised lower and economic conditions are strained.

Many factors may affect the analysis shared here today. The purpose of this article is to provide some guidance about what the end of the largest QE program in U.S. history and the start of the largest QT program may mean to investors. It is likely that market returns will decline in the coming months with the proposed programs taking their full effect. The information above is intended to provide readers with additional insight into the potential market reactions in the coming year.

Thanks for reading and all the best in your investing decisions!