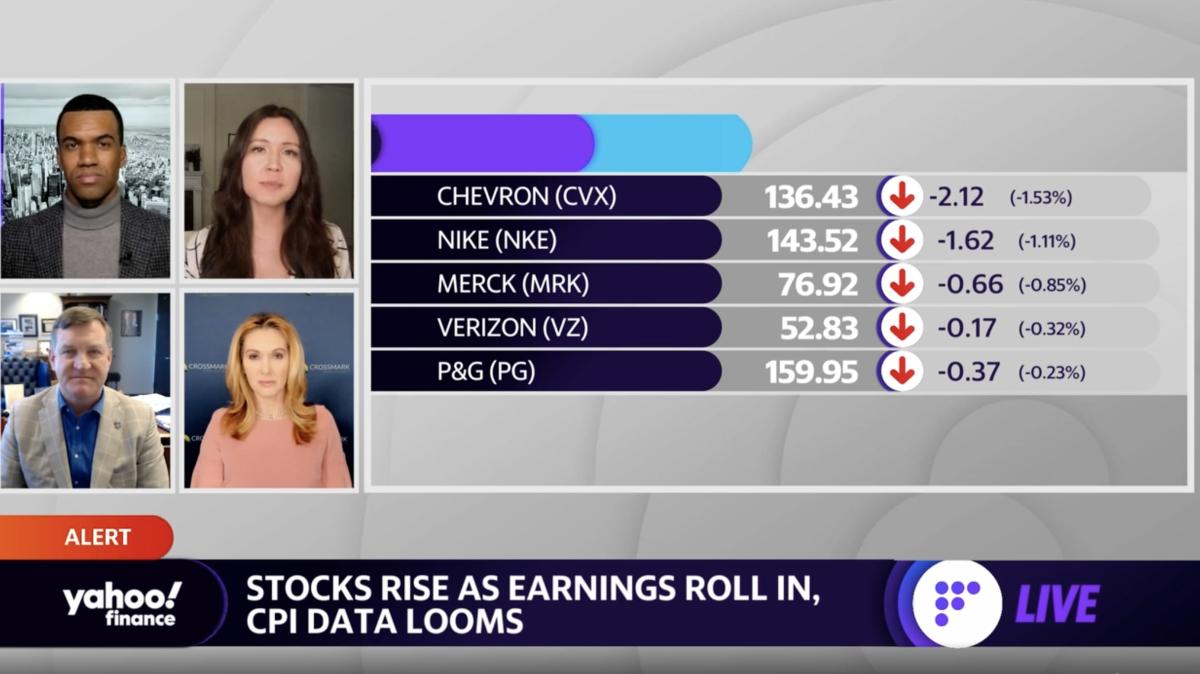 EMILY MCCORMICK: Welcome back to Yahoo Finance Live. I’m Emily McCormick, here with Brad Smith. And we’re also welcoming in our market panel to take us to the closing bell and beyond. George Seay is Annandale Capital CEO, and Victoria Fernandez is Crossmark Global Investments chief market strategist.

But before we turn it over to you both, let’s get one final check of the markets before we end today’s session. The Dow Jones Industrial Average is up more than 1% as we speak, up about 372 points. The S&P 500 up about 8/10 of a percent, and the NASDAQ composite up about 1.3% So definitely seeing green across the screen as we head into the closing bell.

BRAD SMITH: And there, you were taking a live look at the closing bell at the New York Stock Exchange. And the major averages, as we’re taking another look at exactly where things end up on today’s trading activity, you’re seeing gains across the board. We’ve got the trifecta or the hat trick, the triple double, whatever you want to call it, just call it up across the board.

Dow Jones Industrial Average closes higher by about 372 points, 1% to the upside there. And the S&P 500, that closes up by about 8/10 of a percent, 37 points to the upside. And also in the green, the NASDAQ composite, that closed higher by 178 points, 1.3% in positive territory.

And back to our panel we go. We’ve got George Seay, Annandale Capital CEO, as well as Victoria Fernandez, who is the Crossmark Global Investments chief market strategist. Great, again, to have you both here with us today. Victoria, I want to start with you. And particularly, when we think about today’s move in the broader context, have we been able to solidly see these markets begin to chart their rebound? Or are we just bouncing from some of those levels of decline that we were tracking, quite frankly, coming into the month of February?

VICTORIA FERNANDEZ: Yeah, so, Brad, I do not think I would say that we are 100% in the clear and that we’re on a strong rebound at this point in time. There’s just too much volatility going on. And I think you’re going to continue to see that.

I mean, you have a market that’s trying to digest so many different elements, right? You’ve got a decently strong economy, but you’ve got these inflation concerns, CPIs coming out on Thursday. You’ve got valuations that have been somewhat stretched. You have questions as to what monetary policy is going to look like over the course of 2022.

So there’s a lot of digesting going on. And then you throw earnings into the mix. And there’s just quite a bit of volatility. Yes, we had that pull-down at the beginning of the year, which we were expecting around a 10% pull-down at some point during the year. It happened a little early than what we thought it would. But I think you’re still going to have some volatility. I would be careful in going all in, thinking this is a rebound that won’t come back some.

EMILY MCCORMICK: George, taking a look under the hood here at the sector action today, energy was the biggest laggard in the S&P 500 after outperforming pretty strongly throughout the course of 2022 for the year to date so far. Do you think this is the start of an unwind of some of this outperformance that we saw in some of these cyclical areas and in energy specifically? Or is this just a temporary pullback?

GEORGE SEAY: –investor looking ahead to the rest of the year, so thanks for asking it. I would say there’s a lot of crosscurrents today. You’ve got airlines and other reopening cyclical trades that are doing very, very well today and acting very strongly. And I would say that energy has been the leader in the market the entire year so far and was the leader last year, too. So to say that trend is going to unwind all of a sudden because oil is correcting based on a potential Iran deal and the potential that Russia may not decide to invade Ukraine I think is a temporary setback.

If you look at the free cash flow these companies are generating currently, I would not want to bet against that over the next year or two. There’s a lot of tailwinds behind these stocks. And they’ve got a lot further to go, I think. But this is a one-day setback. The market’s really basically going a whole lot of nowhere so far this year. It’s down for the year. This is a nice respite today to get an up move. But I do not think it really knows where to go yet. And with the 10-year at 1.95, you know, the market’s ignoring that today. But if it crests past 2, watch out.

BRAD SMITH: And George, sticking with you for a hot second here, you also kind of note here how earning season, even with some of the major tech companies that we’ve already seen come forward and still yet to have some of the retail, major retail companies both overlapping in e-commerce and brick and mortar set to report as well.

And so with all of that in mind, where would you still be as we navigate to the backend of this earnings season, placing a lot of your attention on, given that there has been a ton of either the forecasts where they’re trying to best anticipate where consumers will navigate inflation or where they themselves, these companies will also navigate their own supply chain concerns?

GEORGE SEAY: Yeah, I would really look at the substance of the earnings and not whether they missed by a penny or beat by a penny or things of this sort that traders and Wall Street analysts agonize over. Those are really kind of lower grade pursuits intellectually. I would be looking more at the strength and substance of earnings. And if you look at commodity stocks and cyclical stocks, they’re going to have some really nice comparisons and tremendous free cash flow they’re generating. And I would focus on that.

On the technology sector, I want to note that when Microsoft reported, the initial reaction was a huge sell-off, and then it came back and stabilized. But all the analysts were fretting over the fact that the cloud piece of Microsoft grew 48%, instead of 51% or 52%. And the fact that such an unbelievably strong performance by Microsoft gets parceled 10 different ways to Sunday and the stock does not move a whole lot, to me, says there’s some real headwinds on the growth part of the market and the technology part of the market.

EMILY MCCORMICK: Victoria, turning to the bond market, as George was alluding to, the 10-year yield is at its highest point of the pandemic, up about– above 190 base points. Now we’ve seen in the past, stocks react to a sharp move higher in yields, but are we at the point yet where the level of where Treasury yields are trading is something that equity investors should be concerned about?

VICTORIA FERNANDEZ: Well, we’ve seen a lot of that, Emily, just in the last six weeks. As yields would move higher, we saw a lot of those high valuation tech names really become quite volatile and the prices with huge swings going on there. It’s really interesting, though, that in this last push higher that we’ve seen, maybe over the last week or so in yield, we have not seen the same reaction from some of those tech names. We see the NASDAQ today up over 1%, I think it was, at close.

So I think there’s a little bit of a shift and maybe maybe people looking and saying, look, historically, we’re at a 1.94, a 1.95. That’s still really low levels for the 10-year. You’ve got global yields really moving. I mean, we have a decrease of 70% of sovereign issues that were negative yielding, right? I mean, just since December. So when you have a huge move like that, I think it makes sense that US yields would get pulled with it.

Obviously, equity investors are going to continue to watch that. 2% is going to be a threshold, just because it’s 2%, right? And we have not been there in such a long period of time. But I think from a technical perspective, you can still have a strong equity market even with rates moving higher.

BRAD SMITH: Victoria, with regard to your core strategy, you’ve moved from an overweight to a growth strategy. Can you break that down for us?

VICTORIA FERNANDEZ: Yeah, so we were overweight growth for quite an extended period of time. And as many people were, especially during the pandemic, those were names that you could have as long-term holdings in your portfolio. But probably six to nine months ago, we started trimming some of those growth names, moving more into some cyclical and some value names. Financials is an area we really like. We started adding to our energy exposure as well.

So we think you need to have a little bit more of a balanced portfolio, maybe a barbell portfolio with some growth, but also increasing that cyclical value component because we do think you’re going to have, really, a tug of war from earnings and from valuations in this economy over 2022.