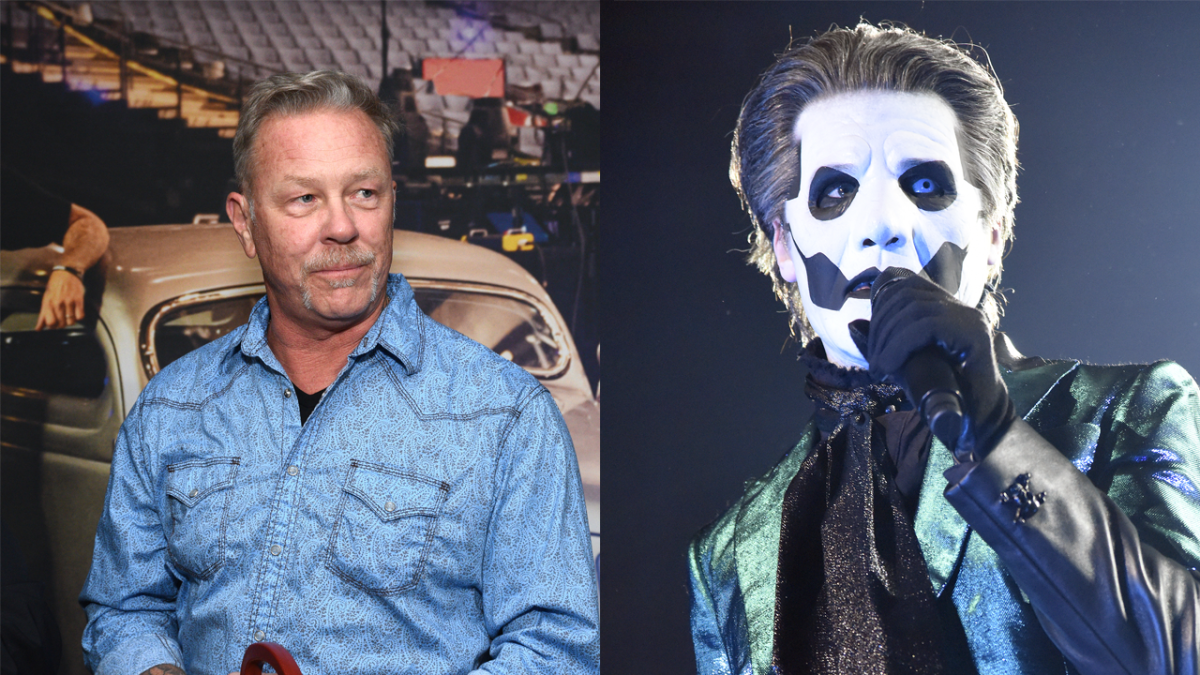 If 2022 has proven anything in metal, it’s that Ghost are the most widely celebrated and talked-about band of their entire generation. With latest album Impera smashing it in charts around the world and the Swedes playing huge venues across The States and Europe, it’s hard to think of another metal band to have emerged at the start of the 2010s that has reaped such huge success.

And one of the band’s biggest supporters throughout this whole time? The biggest metal band of them all – Metallica, whose frontman James Hetfield was singing Ghost’s praises right at the very start, supported them at early shows, and who was a big part of Metallica taking the band under their wing in the years that followed.

It was way back in 2011 at Gothenburg, Sweden’s edition of Sonisphere festival where, wearing one of Ghost’s iconic early t-shirts, Hetfield was questioned about his love of the band, whose hype was still in its infancy.

“I’m in their fan club,” he told SVT with a laugh. “I had no idea what they looked like until I saw the video [of them performing live]. I heard the music first and I thought it was very great, very unique, very melodic and a breath of fresh air for metal. It reminded me of a bit of ’70s kind of rock that I liked as well. So yeah, I love the band. “

“James wore a Ghost shirt backstage before the show, so the TV host started asking him about us,” A Nameless Ghoul told Music Radar when discussing the interview years later. “We were actually on a plane at the time, so when we landed , we switched our phones on and all these messages came in! “He’s wearing the shirt!” Everyone was like, ‘Hey man, forget about the 20 bucks you owe me, I love you!’ “

Less than a year later, James Hetfield would make the effort to go and catch the band live at their very first show in his beloved San Francisco, at an intimate, 350-capacity venue called Bottom Of The Hill on February 1, 2012.

“James came to see us at our first San Francisco show in this tiny venue, which was more like a coffee shop,” A Nameless Ghoul continued. “We were standing backstage in our underwear – it probably was not the best way to meet your idol for the first time. Then he came by after the show. Of course, we were in our underwear again. Come to think of it, I’ve met James many times in my underwear. It’s crazy. The guy is like royalty to us. ”

Evidently, Ghost’s live shows made a good impression on James – they were booked to play the first ever edition of Metallica’s own festival, Orion Music + More, that very summer, with Hetfield personally introducing the band to the stage and telling the crowd they were one of his “new favorite bands.”

In 2018, James would shine the light on Ghost yet again, covering Cirice during a jamming session that took place at Metallica’s HQ. A clip of the cover immediately went viral, once again platforming Ghost to the biggest metal fanbase on the planet.

While Tobias Forge’s crew were no strangers to playing on Metallica bills by that point, having shared the stage at both Orion and various Sonisphere bills, come 2019 the connection between the two bands was taken to the next level when Ghost were picked as main support on the final leg of Metallica’s world tour for the Hardwired … To Self-Destruct album, taking them into stadiums across Europe. It was a tour that Tobias would later rave about, giving Metallica great credit for “taking such good care of us.”

With Ghost now firmly installed as one of modern metal’s biggest names, Tobias – a lifelong Metallica fan – is in no doubt about how much help all that support from James and the boys has been.

“Their support has been key,” Tobias told Guitar World back in October. ” Ever since James started pushing the band about 10 years ago, from that moment on we definitely rose to bigger fame. We performed at their festival Orion Music + More, and we also did some touring together with them when they were doing Sonisphere.

“Eventually, they asked us to support them on an entire tour,” Tobias continued. “So I’d say that we have had a mentor / student sort of relationship. It feels, you know, like the most Miyagi of dojos – you get the hand of the sensei on you.”

Impera was released last month to rave reviews, and will be taken on the road when Ghost tour Europe starting this weekend.