How can Nets fix their rebounding and raise their ceiling? 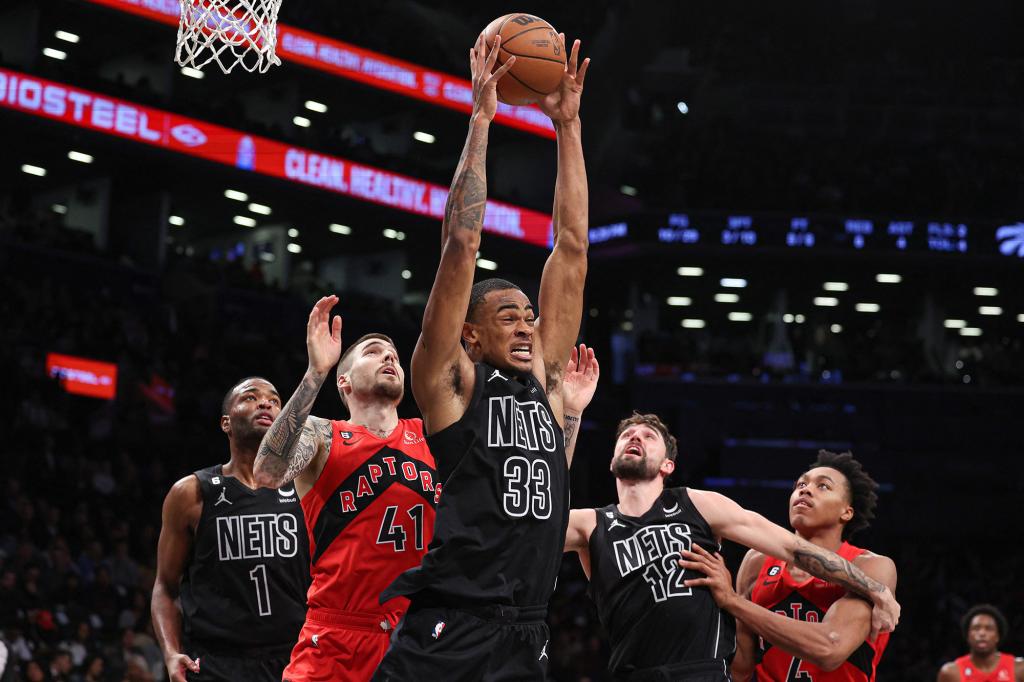 On a sublimely talented Nets team, defensive rebounding is one of their biggest shortcomings. When they’re healthy, it might be their Achilles heel.

Outside observers see it as a roster issue, a personnel problem. From the inside of the Nets organization, some attribute it to tactics, others to temperament.

But they all agree it’s holding the Nets back from being a true championship contender. In the 1980s, then-Lakers coach Pat Riley famously proclaimed: “No rebounds, no rings.” Almost four decades later, the warning holds true for the Nets, statistically the worst rebounding team in the entire NBA.

Considering their downright incompetence on the boards, the Nets’ rise up the Eastern Conference standings is all the more impressive. Mired in 13th place just over a month ago, they’ve ridden superstars Kevin Durant and Kyrie Irving over and through a crowded middle of the pack, and are alone in fourth place at 15-12 following Friday night’s 120-116 win over the Hawks.

The victory came with Nic Claxton, the team’s rebounding leader and only true big, sidelined due to hamstring tightness. Yet with a season-high 11 rebounds from Irving and nine from Royce O’Neale, the Nets still managed to match the Hawks on the boards, 38-38, to the delight of head coach Jacque Vaughn.

Just think where they’d be if they could buy a rebound. As much as injuries or on-ball defense, the rebounding deficiency could be the difference between the Nets being a playoff team and a legitimate contender led by a healthy Durant and Irving.

‘They need another big’

Now comes the question of how to shore up that weakness.

Is it a case of getting the players they have to buy in and do whatever it takes to hold their own on the glass? Or do they need to go outside to acquire more size?

“Jacque doesn’t think so. I do,” TNT analyst Stan Van Gundy — who also was Vaughn’s predecessor as head coach in Orlando — told The Post.

“Either that or they’ve got to pick up in the rebounding. It’s just become a major, major problem.”

The Nets have been linked with Spurs center Jakob Poeltl and Magic center Mo Bamba. NBA free agents Dwight Howard, Hassan Whiteside and Cody Zeller have been floated by pundits.

“They need help,” one veteran Eastern Conference executive told The Post. “They absolutely need another big.”

Following last season’s humiliating playoff sweep by the Celtics, the Nets did a painful self-evaluation. It became painfully clear they needed to add length and two-way play, and knew just getting Ben Simmons back from his back injury wasn’t going to be enough.

Amid the drama of Durant’s trade request prior to the start of free agency, Nets GM Sean Marks traded a first-round pick to the Jazz for O’Neale. The 29-year-old 3-and-D wing has logged the second-most minutes in the league (behind Durant), and he has proved to be invaluable. O’Neale even has been pressed into emergency duty guarding bigs. And long-armed shot-blocker Nic Claxton has been installed as the starting center, repaying Vaughn’s faith with a breakout season.

Still, added length isn’t the same as girth, with some observers throughout the league feeling the Nets are still a little light.

“I mean, their offense won’t be a problem eventually. They’ve got a lot of shooting. Ben is starting to play better. You know Durant and Irving can get whatever they want. But they’re going to need some help.”

The scheme and the ‘formula’

Though that was the opinion of several scouts with whom The Post spoke, the Nets don’t seem to share it.

Vaughn has shown his team video clips of rebounding — both of what they’ve done right and more importantly of what they need to fix. And there is a lot more of the latter.

“That’s always going to be a problem for us, and we know it,” Vaughn said. “We’ll continue to show our guys.

“And it’s not only a mindset, but it’s the ability to have contact on those possessions. And sometimes you go up and you think, ‘OK, I can get this thing.’ You might be better off just boxing out and letting someone else get it. So if we can get those habits of just finding contact with every single play, it will help us.”

Asked whether their issues on the glass were based on effort or personnel, both Vaughn and his players saw internal solutions.

“Especially when we go small, a team is going to try and take advantage of that, go to the glass,” O’Neale told The Post. “We’ve got to be more locked-in, especially on the defensive end, rebounding and helping. That leads to easy offense.”

While the Nets are not one of the league’s higher-paced teams (they rank 24th in pace), they have had success in transition getting open 3-pointers, especially when they have had Simmons on the court to push the ball. They should be able to run off misses more than they do, but too often they fail to keep opponents off the offensive glass.

The irony is the Nets are last in defensive rebounding percentage despite being top five in box-outs. Part of that is their insistence on going small, part is their plethora of tiny guards (Irving, Seth Curry and Patty Mills) and part is their switching scheme that often leaves Claxton on the perimeter and those guards in the paint.

Vaughn referred to a “formula” that has been communicated from the team’s analytics department.

“It’s the amount of times you come back to rebound, which we have to improve on,” Vaughn said. “We have small guards at times in the course of the game. Those small guards aren’t used to coming back and getting in the rebounding space. So that’s the first thing that we have to do.

“Our switching defense sometimes has a big on the perimeter, so we’ve got to figure out some schematic ways to get the big back closer to the rim that’ll help us. But when that doesn’t happen — because Nic Claxton is a pretty good defender one-on-one — then we’ve got to learn how to box out.

“You’re crashing back to a specific area, then you’re touching and feeling and being aggressive with somebody. … You’ve got to hit a body, and you’ve got to get that thing. There’s the formula. We’re working on it all right.”

That calculus will be complex, and getting it right will be the Nets’ toughest test. Or make that their Finals exam.


Get the most out of your 2017 health insurance