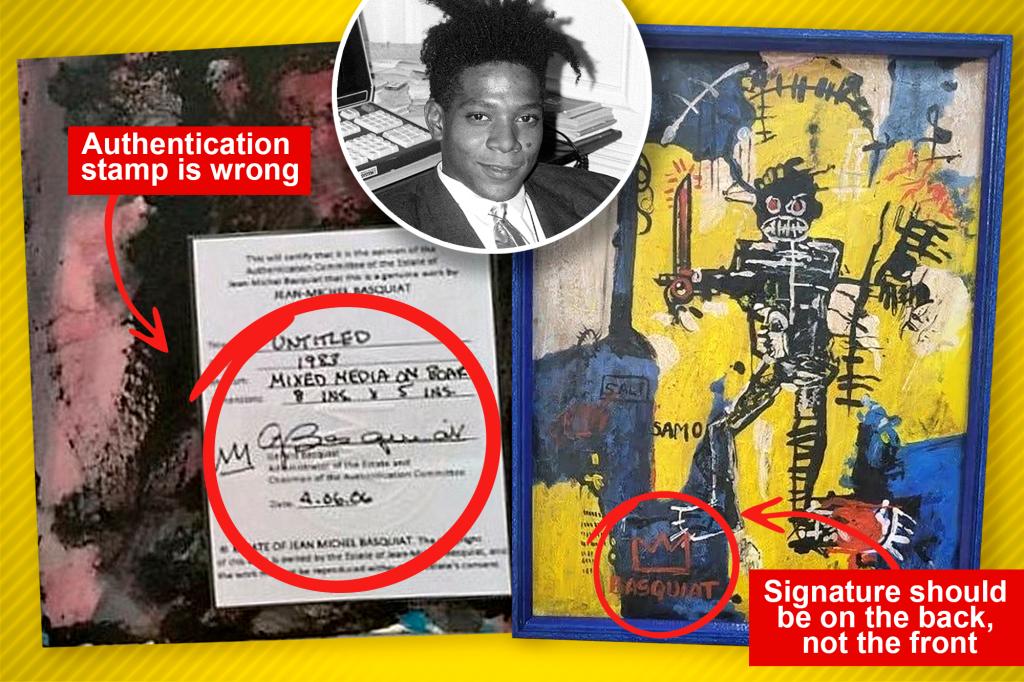 Jean-Micheal Basquiat may have died in 1988, but he is having a big career moment once again.

Last weekend, it was revealed that the FBI’s art crime team is investigating the authenticity of 25 paintings in the “Heroes & Monsters: Jean-Michel Basquiat” exhibition at the Orlando Museum of Art. Meanwhile, Palm Beach art dealer Daniel Elie Bouaziz was charged on Monday for selling fake Basquiats out of his two Worth Avenue galleries.

Richard Polsky, a former art dealer who now runs an eponymous art authentication business, said Basquiat’s work is “absolutely” some of the most counterfeited.

Basquiat’s work is not easy to fake, but it sort of is. The subject matter – skulls and grotesque heads, among other motifs – can be reproduced, but only to a degree, ”he told The Post.

Here’s how four fakers got busted:

Television screenwriter Thad Mumford reportedly bought this collection directly from Basquiat for just $ 5,000 in the 1980s, tucking them away in a storage unit where they sat unseen until 2012, when he failed to make payments on the unit. The contents, including the Basquiats, were auctioned off. (Mumford passed away in 2018.)

The Orlando Museum of Art eventually got a hold of them and, in January, unveiled its “Heroes & Monsters: Jean-Michel Basquiat” exhibit.

But the 25 paintings are now the target of an FBI investigation – in part because one of the pieces, “Untitled (Self-Portrait or Crown Face II),” was painted on a FedEx box bearing a typeface that the shipping company designed six years after Basquiat’s death. (The artist often worked on scavenged cardboard.)

The museum’s team, including director and chief executive Aaron De Groft, insist they’re real, and the paintings will remain on display while the FBI investigates.

On May 26, Daniel Elie Bouaziz, who owns Palm Beach’s Galerie Danieli and Danieli Fine Art, was named in a federal criminal complaint filed in South Florida – charged with selling fake paintings by the likes of Andy Warhol, Banksy, Roy Lichtenstein and Basquiat, among others.

He sold the counterfeit Basquiat above for $ 12 million, after having bought it for $ 495 on LiveAuctioneers. The buyer, however, was an undercover FBI agent.

Among the giveaways: “Basquiat never signed his paintings on the front. If he signed them at all, it was on the back of the painting, ”art consultant Emily Santangelo told The Post.

In July 2021, Mexican politician Angel Pereda was arrested in New York for attempting to peddle forged Haring and Basquiat paintings to an intermediary – later revealed to be an FBI informant – who he hoped would then sell them for millions of dollars. One such painting was “Glory Boys Kingdom,” and Pereda alleged that it was painted in the 1980s by Basquiat.

The one Pereda was trying to pass off fails to convince, in part, because “there is so much iconography jammed in,” Levene said. noting the takes on Basquiat’s signature airplane, crown and big-toothed face. “It’s overkill.”

Pereda was charged with one count of wire fraud.

Italian art dealer Annina Nosei is a Basquiat expert: Her Soho gallery, which closed in 2006, not only displayed an impressive collection of authentic Basquiat paintings, but her basement was the artist’s studio in the 1980s.

When a South Florida gallery owner – ready to pay close to $ 1 million for a pair of Basquiats from a private seller, California-based Philip Righter – reached out for her opinion, Nosei declared that both the paintings and their authenticity papers were phony.

Righter had employed fake labels indicating that he purchased the Basquiats from Nosei’s gallery and re-created custom embossed stamps that were similar – but not identical – to the ones Gerard Basquiat, the artist’s father and executor, used on documents.

“The world will never stop making fake Basquiats – especially any time soon,” Polsky said. “He’s at the peak of the pyramid right now.”