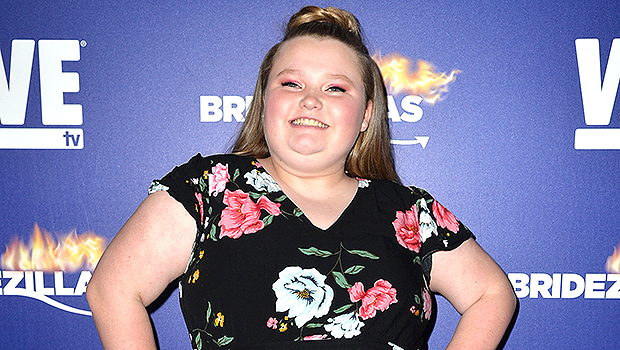 She’s growing up so fast! Alana “Honey Boo Boo” Thompson, 26, took to Instagram on Aug. 5 to show off her senior portraits as she prepares to enter her final year of high school. The carousel of photos (seen here) shows a smiling Alana in a traditional black graduation drape in previews of the stunning professional snapshots and in a behind-the-scenes photo of her in the process of getting her picture taken. Two other pictures show Alana smiling widely as she represents her high school in a black long sleeve shirt that says “SENIOR” on it paired with a white “WCHS” pleated tennis skirt. “senior year!!” Alana enthusiastically captioned the beautiful pictures.

Senior year is not the only big event coming up in Alana’s life. In July, she revealed she’s preparing to undergo weight loss surgery in the hope of shedding 125 pounds to meet her goal weight of 150 pounds. The surgery will take place shortly after Alana’s Aug. 28 birthday, on which she will turn 17. The exact procedure Alana is set to get is a suture sculpt endoscopic sleeve, which is a “non-surgical outpatient procedure” that reduces the capacity of the stomach by 70 to 80 percent without having to physically cut the stomach smaller.

Alana’s mother June “Mama June” Shannon, 42, who she has a very strained relationship with, said she found out about her daughter’s surgery with the public and was not completely happy about her decision. “I’m supportive if this is something Alana wants to get, but I would say she needs to wait until she’s 18 years old,” the Mama June: Road To Redemption star, who has previously had weight loss surgery herself, told TMZ on July 27.

Mama June’s Kids: See How Honey Boo Boo & All The Sisters Have Grown Over The Years

Supporting her through the start of senior year and the surgery is Alana’s 20-year-old boyfriend, Draline Carswell. A person close to Alana EXCLUSIVELY revealed to HollywoodLife that Dralin is also getting the surgery and will support Alana along her new journey. “They’ve both been losing weight through changing their eating habits and exercise and they feel this will help them lose more weight and keep it off,” they said.