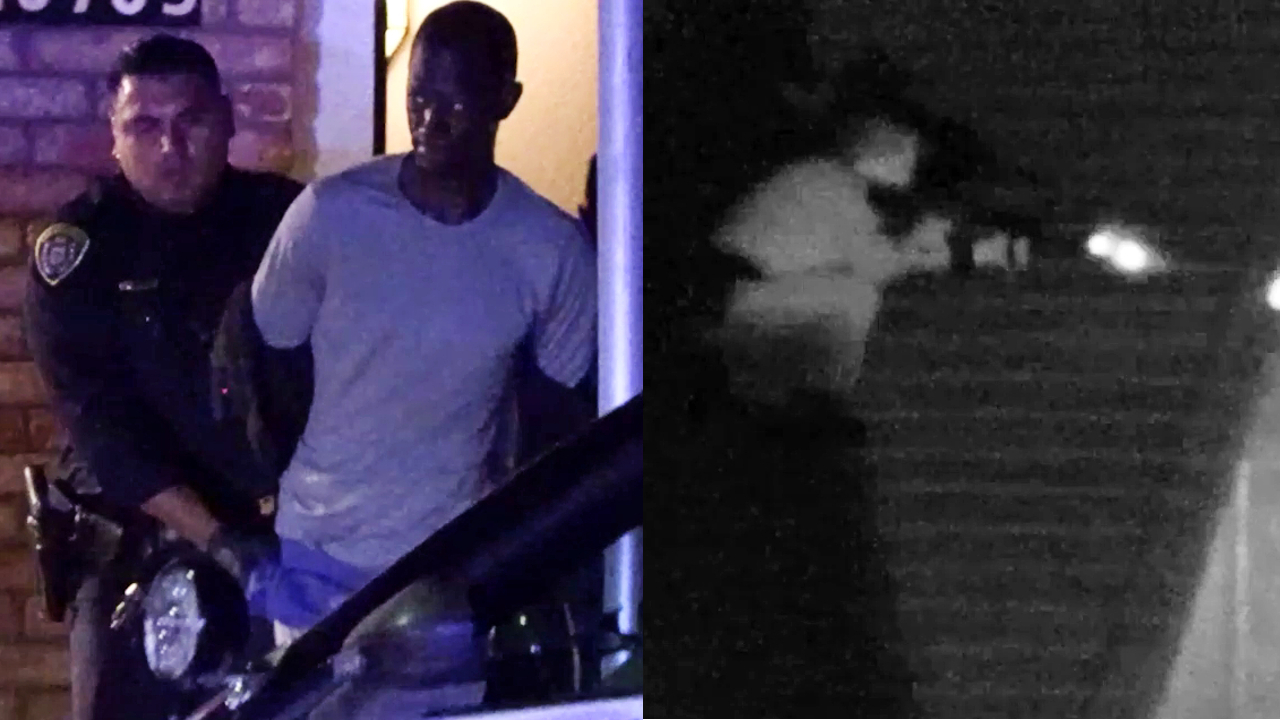 An officer and the burglar both fired their weapons as police tried to make an arrest, but no one was struck by the gunfire, the San Diego Police Department said in a news release.

It all started shortly after midnight with two separate calls about a man in a van “prowling” the Tierrasanta neighborhood and trying to break into houses, according to SDPD. When the department sent officers, they could not find the burglar after either call.

Then, shortly after 2am, authorities got a third call from a home on Viacha Drive, south of Tierrasanta Boulevard. A resident said someone forced his way into her home, according to police. The woman and her elderly father locked themselves in a room while they waited for help, but the man eventually broke down the door.

The intruder threatened the residents, flashing a gun, police said. Officers arrived and heard screaming in the house, so they forced their way inside and confronted the man.

“Ignoring officers’ commands to surrender, the suspect took the victim hostage at gunpoint and forced her into another bedroom,” the news release states. “During the totality of this interaction, the suspect exposed himself and sexually battered the homeowner multiple times.”

Police managed to separate the woman’s father from the fray, moving him to a balcony and guarding him while other officers tried to get the woman to safety.

At one point in the ensuing standoff, the intruder fired his gun, but he did not hit the woman, her father or police, SDPD said. It was not immediately clear what the intruder intended to shoot.

Shortly after the man fired his gun, an officer positioned on the roof of a neighboring home shot at the burglar through a second-story window, police confirmed. He fired about six rounds from a rifle, according to video from OnScene TV.

The man was not hit, but “in response to the rifle rounds, the suspect dropped to the floor, threw the gun away, and was taken into custody,” SDPD said. Video showed officers leading him in handcuffs to the back of a police SUV.

The suspect was identified as Demetrius Trussell, 40, and police say he faces a variety of charges. SDPD listed: hot prowl burglary, kidnapping, false imprisonment with a hostage, negligent discharge of a firearm, possession of a stolen vehicle, indecent exposure, assault with the intent to commit a sex crime, sexual battery, multiple counts of assault with a deadly weapon and a parole hold.

The woman and her father were safely evacuated from the home. Medical workers were seen checking on the woman, but police did not note any specific injuries suffered in the attack.

At the scene, SDPD Capt. Rich Freedman said it was too early to determine what specifically prompted the officer to fire at the time he did. Officials will review body camera video and interview the officer. After an investigation by the department’s homicide unit, the San Diego County District Attorney’s Office and other agencies will review the shooting.

As of late Saturday morning, authorities were still working to confirm that the same man was involved in all three police reports about area break-ins.