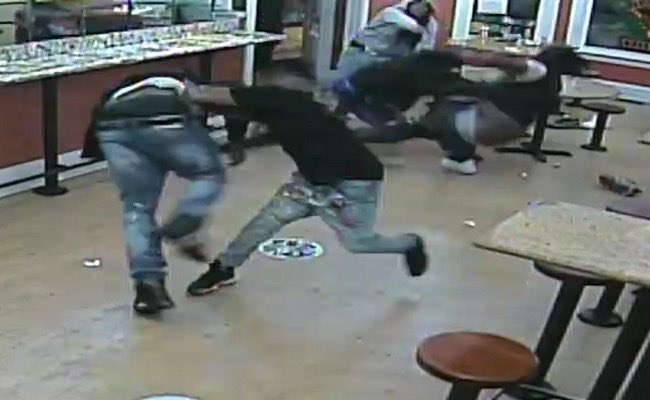 SAN JOSE, Calif. (KRON) – A man who wrestled a gun away from an assailant during a chaotic brawl inside a popular taqueria has filed a civil rights lawsuit against the police officer who shot him in the melee.

K’aun Green “bravely disarmed a gunman” and he was still holding the gun when half a dozen police officers arrived at the taqueria on March 27, Green’s attorneys said.

Green, 20, was shot multiple times and is currently recovering from gunshot wounds.

According to his attorneys, the police officer did not give Green a chance to drop the gun before the officer opened fire at La Victoria Restaurant, across the street from San Jose State University’s campus.

San Jose Police Chief Anthony Mata has not yet released the officer’s name.

At the time of the shooting, the officer believed that there was likely an armed homicide suspect inside the taqueria, Mata said. A deadly shooting had just occurred by coincidence less than a block away.

Officers were working at the homicide scene when they saw panicked customers running out of the taqueria at 3 am, Mata said.

“While managing the homicide crime scene, officers were flagged down and called to deal with yet another firearm-related incident less than half a block away,” Mata said.

Green’s attorneys gave the following description of what happened before and during the officer-involved shooting:

Green is not facing any criminal charges.

Brian Carter, the man who originally brought the ghost gun to La Victoria and brandished it during the brawl, was arrested for being a felon in possession of a ghost gun, according to Mata.

Witnesses in the cellphone videos can be heard criticizing the police for being too aggressive.

“We do not comment on incidents pending litigation,” police Sgt. Christian Camarillo told KRON4 on Thursday.

During a press conference held on March 29, Police Chief Mata gave the following description of what happened before and during the officer-involved shooting:

Green’s former coach said Green was an outstanding student-athlete during his time at Contra Costa College.

“Everyone is stunned, basically, because he has been an outstanding young person in our campus and within our program,” Contra Costa College athletic director John Wade told KRON4.

Wade said the entire Contra Costa College community is praying for Green’s full recovery so he can continue to pursue his dreams of becoming an NFL player.

“He has been an outstanding young man. They had a great season this year. They were 10 and 1. He was an All-League Player for us. (Green) had an opportunity to get a scholarship after only playing one year at this level to go to a four-year school. ”

-This breaking news story will be updated