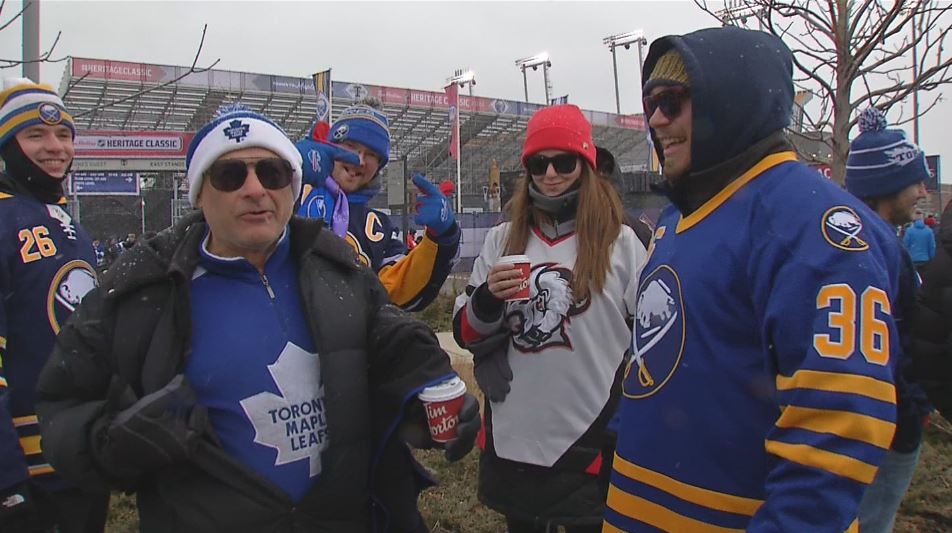 HAMILTON, Ont. (WIVB) – The Buffalo Sabers were designated as the home team for the 2022 Heritage Classic Sunday. But make no mistake – Tim Hortons Field in Hamilton was largely filled with Toronto Maple Leafs fans.

Hamilton is roughly equidistant between Buffalo and Toronto (Tim Hortons Field is 63 miles from KeyBank Center and 70 miles from Scotiabank Arena). It comes as no surprise to anyone that Leafs fans dominate Southern Ontario. They certainly dominated the Sunday stage. Most of the 26,119 in attendance were wearing Maple Leafs logos.

But you could find plenty of Sabers fans as well. And they all have their own story to explain why that’s the case.

“My dad is a Leaf fan,” said Jordan Pepper, a Clinton, Ontario resident. “He pushed it on me every day since day one. So I decided I can not be a (fan of a Canadian team) at all. So I picked Buffalo. ”

Pepper went to the Heritage Classic with Olivia Schefter, a Leafs fan. Despite divided allegiances, they seemed to enjoy each others’ company. Both were positive pregame that their respective team would win.

For Jamie Michaud, it was Grant Fuhr.

“He played for Toronto a long time ago. He went to Buffalo. I kind of just stuck with Buffalo, ”Michaud said. “I loved them.”

Then there are twins Marco and Sandro Nunziato. They live in Barrie, Ontario.

“The first time I saw Gilbert Perreault play I fell in love with the Sabers and I’ve been a Sabers fan ever since,” Marco said.

The Nunziato brothers are celebrating their birthday this week. They say their wives sent them to the Heritage Classic as their gift.

“Exactly. That was one of the reasons, Marco Nunziato said. “And it’s my team. It’s my heart. I live and die by the sword. ”

The Sabers ended up beating Toronto 5-2.

Chris Horvatits is an award-winning reporter who joined the News 4 team in December 2017. See more of his work here.