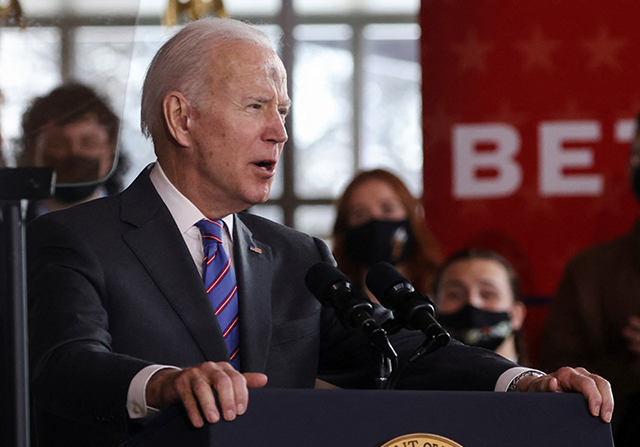 First, let me just mention that I’ve become a big fan of historian Heather Cox Richardson. Although she teaches American history at Boston College, I know her from her books and now mostly get her masterful ability to put current events into historical context via her weekly podcast (“Now & Then”) with fellow historian Joanne Freeman. But I’ve read some of her books and online columns as well.

For some stupid reason, I do not mention her nearly enough in Black Ink. But the other day I stumbled upon a recent video of Richardson interviewing Joe Biden just after he had nominated Judge Ketanji Brown Jackson to the Supreme Court. I recommend the wide-ranging 30-minute interview not just because I’m a Richardson fanboy but because the interview brought me back to the times when I have been most impressed with Biden.

To be clear, Biden did not make any news in the interview, nor did Richardson ask him the kind of questions he is usually asked. He seemed relaxed, but not rambling. Richardson asked Biden questions journalists would not ask, in the sense that they were not “news” questions, and also that she was never in “gotcha” mode, trying to get Biden to say something he should not say or did not mean to say.

As a result, Biden seemed quite human, authentic and willing to open up a bit. His stutter practically disappeared. Really. He talked for 30 minutes and, if you were not obsessed with noting the few small exceptions, his stutter disappeared.

But his answers were quite substantive. Well, maybe “substantive” is the wrong word. He seemed open, honest, more philosophical than we’re used to hearing. He spoke without notes or a script, but also without the heavy pressure to give short answers, or even newsy answers.

If you watch it, maybe you’ll think his answers ramble (not much, according to me). He seemed roughly the opposite of a guy who had walked into the interview with five talking points his handlers told him to be sure to mention.

You might find him a bit rambling, but that surely seems to be because Richardson was not interrupting. And he did not have to worry about recognizing any other questioners. It helps, I suppose, that Richardson does not start with a “news agenda” designed to elicit headline-worthy answers. Also, Richardson let him talk. She asked only a few questions and he stretched out into them, but he did not repeat himself. It was calming, refreshing, even reassuring.

I’m not in love with Biden as a speaker. Not at all. Of course, when it’s a speech, he’s generally reading it off a teleprompter. I guess you could say that the ability to read smoothly of a teleprompter has become vital to a successful presidency, but it’s kind of a dumb pet trick. And when it’s a press conference, Biden is often facing hostile or “gotcha” questions.

This was better. Not newsier. Not at all. I can not find a single news story anyone wrote about this interview. But “news” is its own construct. Biden made roughly no news in this 30-minute interview. But it left me feeling a bit better about Biden, about the country, life in general.

If this makes you want to watch the Richardson-Biden encounter, it’s right here.