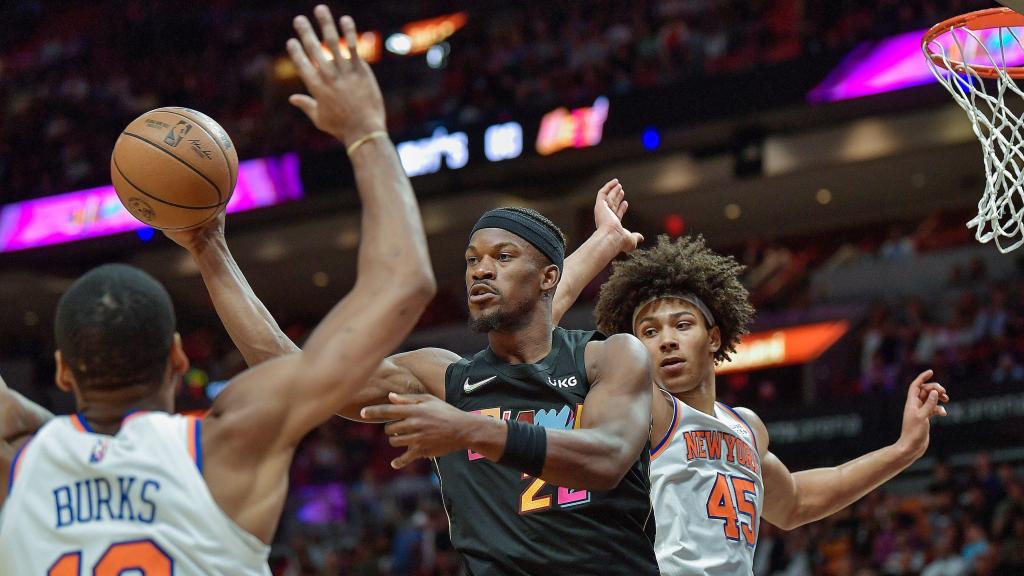 Games against the New York Knicks used to provide nothing but drama for the Miami Heat. Friday night, that drama was back at FTX Arena.

Which was exactly what the Heat did not need amid a week that opened with a pair of ugly losses and a three-way bench spat, and now moves on to Saturday night’s home showdown against Kevin Durant, Kyrie Irving and the Brooklyn Nets.

Up 17 early in the final period, the Heat collapsed to yet another hideous loss, this time 111-103 to a team headed to the lottery.

“We should not have [these issues at] this point in the season, ”center Bam Adebayo said. “But I feel like every team goes through losing streaks.”

After falling on Monday night to a Philadelphia 76ers team lacking Joel Embiid and James Harden and losing on Wednesday night to a Golden State Warriors team lacking Stephen Curry, Klay Thompson and Draymond Green, the Heat again took on the look of a team that has lost its way, this time with the Knicks playing in the injury absence of former All-Star forward Julius Randle.

No, this was not the internal strife of Jimmy Butler, Udonis Haslem and Erik Spoelstra creating quite the angry kerfuffle during a timeout in the loss to the Warriors.

But it again was an unnerving moment.

“This is totally different,” Spoelstra said of Friday night’s loss. “Each game is different. This was a game that really was decided by the second-chance opportunities that they had. It just kept them alive.

This time, Butler let his play do the talking, closing with 30 points, seven assists and seven rebounds. He was supported by 17 points and nine rebounds from Adebayo and 17 points and three 3-pointers from point guard Kyle Lowry.

But it was not enough for the team that continues to display befuddling late ineptitude despite its standing atop the Eastern Conference.

“It’s not very concerning,” Butler said, “just because we know we’ve got to play better.”

The Knicks were led by the 23 points of Immanuel Quickly and the 18 of RJ Barrett, with New York closing with 18 offensive rebounds and a 28-14 edge on second-chance points.

“We just got to get in the trenches again, look at film, bounce back,” Adebayo said.

But with Butler and Adebayo out at the start of the final period, the Knicks, after the Heat extended their lead to 17, rallied to a 97-94 lead with a 21-4 run.

“I feel like in the fourth,” Adebayo said, “we just got stagnant tonight.”

2. Feeble finish: The Heat shot 5 of 18 in their 15-point fourth quarter, with five turnovers. It was typical of the frequent fourth-quarter meltdowns this season, the majority of those still salvaged.

“Offensively,” Spoelstra said, “we just have to be better. I’ve got to figure out how I can help and get us in more of a flow, more of a rhythm, play with a little bit more pace to be able to put some more points on the board.

“This is five out of seven games where we just have not scored the way we’s capable of. We will figure that out and get better at that. ”

3. Solid start: Butler tried to set the early tone, with 10 points and five assists in the opening period, up to 17 and six at the intermission.

Butler’s fourth assist gave him 1,000 with the Heat. He became the 14th player in franchise history to record 1,000, reaching the mark in the fourth fewest games in franchise history (161). Only Tim Hardaway (112 games), Sherman Douglas (126) and LeBron James (151) reached the mark faster.

Of Friday night’s outcome, Butler said: “It’s easily fixable, and we’ve got to go out and do it.”

4. Herro out: Tyler Herro missed his second consecutive game due to a sprained left knee, an absence than came on the heels of his 5 of 15 in Monday night’s road loss to the Philadelphia 76ers.

That had the rotation altered with Strus first off the bench, followed, in order, by Dewayne Dedmon, Caleb Martin and Markieff Morris.

“Obviously we miss Tyler,” Adebayo said. “He’s a big part of our offense. But at the end of the day, we’ve got to find a way to get through it without him. ”

The Heat also were without backup guard Gabe Vincent for a third consecutive game due to a bruised toe.

5. Morris recast: After an uneven run at backup center, Morris was cast in more of a perimeter role, providing an immediate payoff by converting his first two 3-point attempts.

Morris played his initial minutes alongside Dedmon, with much of his work on offense coming on the perimeter.