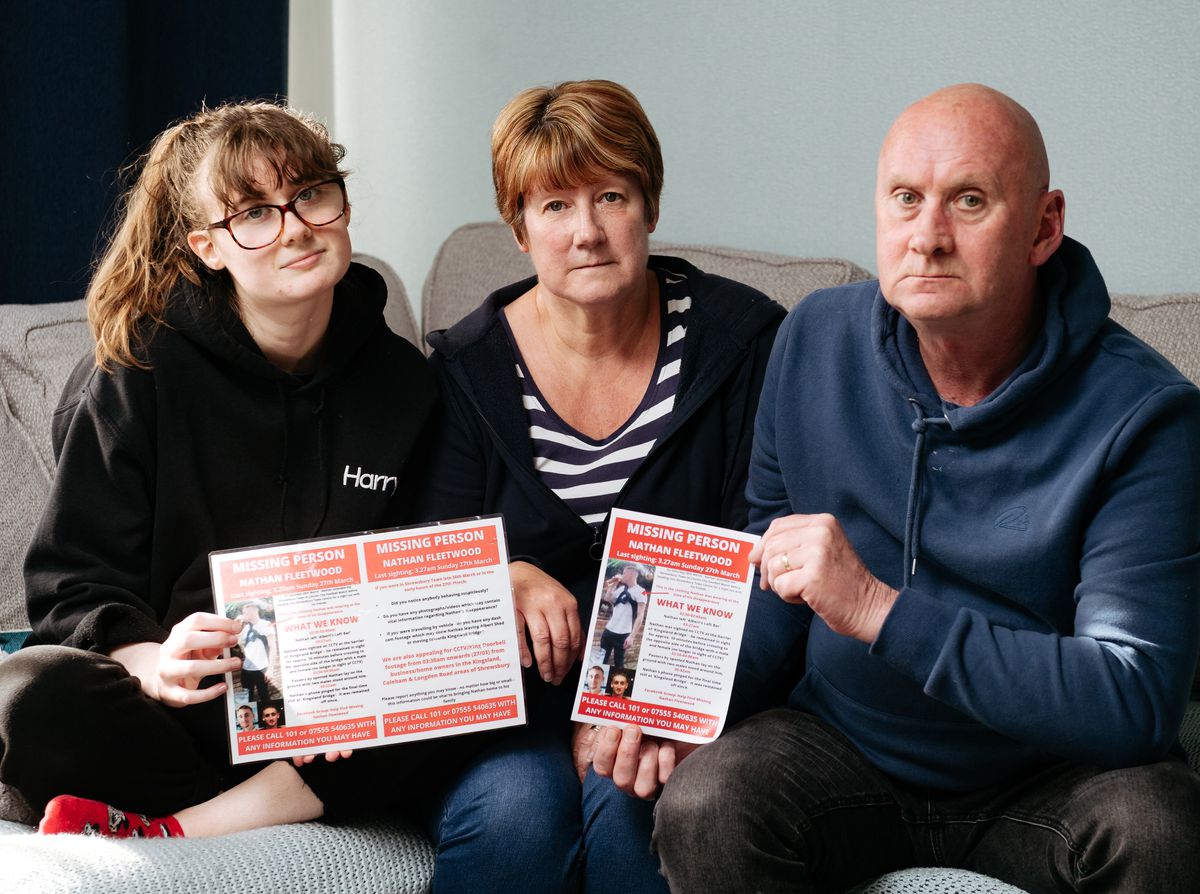 Nathan, who had been on a night out with friends in Shrewsbury, was seen walking along Kingsland Road, near Kingsland Bridge, in the early hours of Sunday, March 27th.

He had previously been seen leaving Albert’s Shed in Barker Street at around 2.30am.

Hundreds of people have taken part in searches to try and find him, with police and specialist teams looking along the River Severn trying to find clues as to his whereabouts.

The 21-year-old, who works at McDonald’s in Meole Brace as a crew trainer, is a keen footballer, playing as a winger for The Telegraph in Shrewsbury, and is a fan of Manchester United.

A fresh search, organized by Nathan’s friend Toby Owen, will be taking place in Shrewsbury on Sunday morning, with people meeting at Hickory’s on Victoria Quay from 8.30am.

Nathan’s parents Carol, 54, and Ges, 56, and his 19-year-old sister Hannah, said his disappearance had been completely out of character and that they had been left with “emptiness” at not knowing what has happened.

Carol urged anyone with information – no matter how small – to come forward.

She said: “If anyone has any information from 4am on Sunday, March 27, any sighting, any information, if they have heard anything, to please come forward and telephone 101, or message Toby.

“Even if people think it’s insignificant, it might be that little piece of missing information that matters.”

Carol and Ges, who live in the Castlefields area of ​​town with Nathan, said that the messages of support and offers of help had been “unbelievable” since their son’s disappearance.

Ges said: “It has been overwhelming the support and the love for him. People giving up their spare time to help.”

Carol said: “There are so many people to thank, the support has been amazing and we can not thank people enough.”

They added that hearing stories of how Nathan had helped and supported his friends had left them even more proud of their son.

Described as an outgoing lad with friendship groups from school, college, work, and football, Carol said: “We did not realize how many friends he has.”

She added: “The stories we have heard of him being supportive to his friends when they have had difficult times, it makes us so proud of him. We are very proud of him.”

Carol and Ges said they had been trying to keep busy with the search and the efforts to find Nathan.

Carol said: “We are just putting our time into doing things. Getting things sorted, that’s what’s keeping us going otherwise we would break.”

Carol and Ges said they knew something was wrong when Nathan had not got in touch after his night out.

Carol said: “He did not return home on that Sunday morning in the early hours. I thought at first he had stopped at a mates or his girlfriend’s and had not let us know.

“He normally texts but as the day went on I tried his phone and it went straight to voicemail.

“I thought he had forgotten to text and would be like ‘sorry mum, I was at a mates’.”

Both Carol and Ges said they were at a loss to explain why Nathan had been seen in Kingsland, heading the opposite way from home.

Ges said: “There was no reason for him to go along Kingsland Bridge, to be in that area of ​​town.”

Ges said that extra CCTV could help save people who do get into trouble.

He said: “I can not remember anything like this happening ever in such a small space of time.”

People with information are asked to contact West Mercia Police on 101 quoting reference number 347i of March 27.

People can also get in touch with Toby Owen through the Facebook page set up to help co-ordinate efforts to search for Nathan, at facebook.com/groups/494416072225702