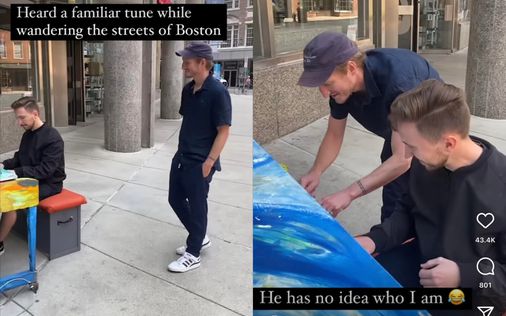 “I looked over at him and said to myself, ‘This guy kind of looks like one of the guys from The Lumineers,'” said Spencer, 27.

Turns out, that’s exactly who it was. In a remarkable twist of fate, the band’s co-founder, Jeremiah Fraites, was walking through Downtown Crossing on his day off from touring when he overheard Spencer on the piano, playing a song he knew quite well.

He followed the sound wafting through the streets and surprised an unsuspecting Spencer.

“It was so mind-blowing,” Spencer said by phone Wednesday. “I was immediately star-struck and I was embarrassed that I did not play the song better.”

Fraites posted a video of the chance encounter with Spencer on Instagram Tuesday.

“[Nicholas Sutton Bell] and I were walking around Boston on our day off and heard someone playing ‘Ophelia’ on a street piano, ”Fraites wrote in a caption accompanying the clip, which has been viewed nearly 500,000 times. “At first, he did not realize that I was from The Lumineers, but he was kind enough to let me hop in and play with him.”

In the video, Fraites tells Spencer, “That’s a good song, man,” as he listens for a minute while standing behind him and giving the thumbs up.

He then walks up and starts tapping a few keys as Spencer – unaware the person who wrote the song was right next to him – continues to play.

Then Sutton Bell – a creative director who has done videos with the band, and was filming the conversation – tells Spencer, “This is his song,” referring to Fraites. Suddenly, it all clicked.

Fraites and Spencer then talk for a moment before Fraites tells him that his rendition of “Ophelia” was “awesome” and “perfect.”

Fraites said on Instagram that it was “great playing” with Spencer and invited him and a few friends to come see the band perform at the Xfinity Center in Mansfield on June 3.

This is not the first time a musical celebrity has surprised a local performer playing one of their songs while visiting the city. In October, singer and pianist John Legend watched and listened as Radha Rao performed “All of Me” for a small crowd at Faneuil Hall. He then approached her and gave her a hug and a tip.

Spencer, an AmeriCorps partner with the National Parks Service, described Fraites as “chill” and a “really nice guy,” and said the serendipitous encounter was the “most insane thing that has ever happened to me.”

“I never considered that this could possibly happen before, even while it was happening,” said Spencer, who has been playing piano for about 14 years. “But it was totally the coolest guy for it to have happened with.”

Getting to see the band perform is fortuitous because a show he had gotten tickets for was canceled during the peak of the pandemic. Getting a chance to see them now is something he will not soon forget.

“They have been my favorite band over the past four years or so, so now that it’s actually happening, in this way, in such a weird and awesome and just bizarre kind of way that the universe sent me” is a rare thrill, he said.

Who knows, maybe Fraites will even invite someone from the audience to join him on “Ophelia.”