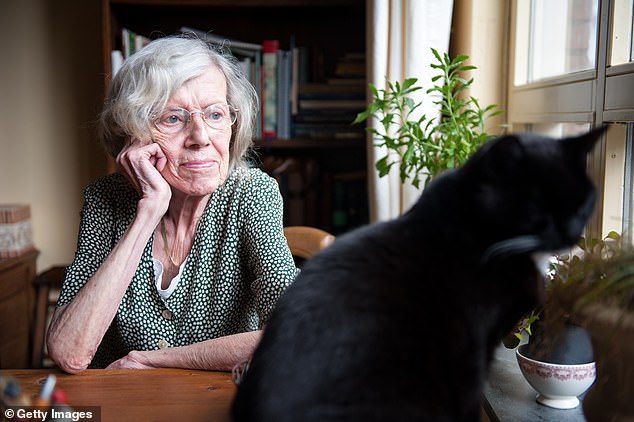 Nearly half of America’s elderly cannot afford essential expenses due to rising inflation and higher cost of living, a report has claimed.

A staggering 54 per cent of older women living alone are classified as poor under federal poverty standards – and they have insufficient incomes to pay for essential expenses, according to the University of Massachusetts-Boston’s Elder Index.

A total of 45 per cent of older men are facing the same dire situation, the report found.

Based on their annual incomes, more than two million older couples living in the US were also considered financially insecure, according to data supplied by Jan Mutchler, director of the Gerontology Institute.

This data from 2020 does not take into account the soaring nine per cent inflation or the effect of the coronavirus pandemic on the job market for older Americans – with experts fearing the toll may now be worse on older people.

Nationally, 54 per cent of older women living alone do not have sufficient incomes to pay for essential expenses, according to the University of Massachusetts-Boston’s Elder Index (stock image)

Mutchler added: ‘With those stressors layered on, even more people are struggling.’

The Elder Index uses factors such as the cost of health care, housing, food, transportation to calculate how many older citizens are living near or on the bread line.

It also takes into account whether people are in poor, good, or excellent health – and whether they rent or have mortgages on their homes.

The research revealed that a single older adult in good health paying rent needed $27,096, on average, for basic expenses in 2021.

But this figure is far from the federal poverty threshold of $12,996, according to Kaiser Health News.

Ramsey Alwin, president and chief executive of the National Council on Aging, said: ‘There’s a myth that Social Security and Medicare miraculously take care of all of people’s needs in older age.

‘The reality is they don’t, and far too many people are one crisis away from economic insecurity.’

This follows new research that revealed that eighty-five percent of US adults say the country is on the wrong track, and 79 percent describe the economy as poor, according to a new survey from The Associated Press-NORC Center for Public Affairs Research.

More than two million older couples living in the US were also considered financially insecure, according to data from 2020. Many fear that with inflation and the aftermath of the pandemic, this figure is much worse in 2022 (stock image)

A staggering number of voters also believe the country is off on the wrong track amid multiple supply shortages, a possible looming recession and record inflation

The findings suggest Biden faces fundamental challenges as he tries to motivate voters to cast ballots for Democrats in November’s midterm elections.

Inflation has consistently eclipsed the healthy 3.6 percent unemployment rate as a focal point for Americans, who are dealing with particularly sharp spikes in gasoline and food prices.

The average cost of consumer goods rose 8.6 percent in May, according to the most recently available data, the highest increase since 1981.

‘He’s doing the best he can – I can’t say he’s doing a good job,’ said Chuck McClain, 74. ‘But his opposition is so bad. I just don’t feel the Democratic Congress is doing enough.’

Despite signs of a possible economic recession, consumer spending has largely kept pace and hiring remains brisk in a sign that families and businesses have been able to withstand some of the economic pain.

In an interview this month with the AP, Biden traced the decline in his popularity to increases in gas prices that began a year ago.

He said that prices shot up further with Russia’s invasion of Ukraine in February. But he rejected claims by Republican lawmakers and some major economists that his $1.9 trillion coronavirus relief package from last year contributed to inflation, noting that price increases were a global phenomenon.

‘We’re in a stronger position than any nation in the world to overcome this inflation,’ Biden said. ‘If it’s my fault, why is it the case in every other major industrial country in the world that inflation is higher?’