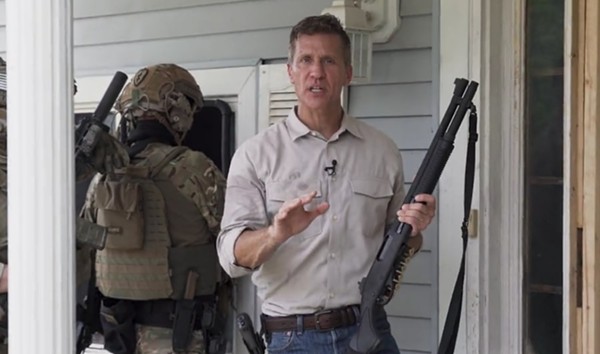 Eric Greitens and a paramilitary goon squad prepare to break into an empty house for some reason.

Disgraced former governor of Missouri and duct-tape enthusiast Eric Greitens released a new campaign ad for his Senate run today, in which he cocks a shotgun and vows to hunt down his political opponents before he and a paramilitary squad of some sort break into what appears to be a vacant house.

If that sounds like a dystopian scene from a failing and increasingly authoritarian police state, well, it is, but you should probably keep that opinion to yourself if you do not want to be killed by the goon squads.

The unhinged ad opens on what appears to be a tranquil suburban street, where Greitens, who resigned as governor in 2018 after being accused of sexually assaulting and blackmailing a woman, strolls up to a mailbox sporting the words “THE RINO’S DEN” while holding a shotgun.

“The RINO feeds on corruption and is marked by the stripes of cowardice,” he then says gravely as he and his group of hyper-militarized accomplices gather on a porch to break down a door that does not appear to be fully installed. Slam goes the battering ram as the intense score swells, flashbangs are deployed and the death squad rushes into the completely unfurnished house, with Greitens entering last and coolly removing a pair of sunglasses he was not wearing when he was outside.

“Join the MAGA crew,” he says, fumbling to hold the sunglasses and the gun at the same time. “Get a RINO hunting permit,” he continues as the magical glasses conveniently disappear from his hand. “There’s no bagging limit, no tagging limit and it does not expire until we save our country.”

For the uninitiated, a “bagging limit” is defined as “a law imposed on hunters and fishermen restricting the number of animals within a specific species or group of species they may kill and keep.” “Tagging limit” is more of the same, again referencing the total number of a specific animal species a hunter can kill. “RINO,” the species in question here, is an acronym that means “Republican In Name Only,” which by this point appears to refer to anyone in the GOP to the left of those who are stoked to shoot their political opponents.

The ad, which does not give one hint or inkling at any time that it should not be taken fully at face value, comes just one day after Republican Rep. Adam Kinzinger of Illinois announced on ABC News that he’d received mailed threats of violence at his home. Kinzinger, one of two Republicans holding public hearings related to the January 6 investigation, warned of “violence in the future.”

“This threat that came in, it was mailed to my house. We got it a couple of days ago, and it threatens to execute me, as well as my wife and five-month-old child,” Kinzinger said. “We’ve never seen or had anything like that. It was sent from the local area.”

Greitens has been desperately and sweatily vying for former President Donald Trump’s endorsement in the upcoming Missouri Senate primary, but Trump has so far held back, as national Republican leadership has been concerned that the whole accusations-of-sexual-assault-and-blackmail thing might make him the most vulnerable on the GOP ticket. But seeing as how he’s now actively threatening to kill those against Trump’s political agenda in the name of MAGA – people like Kinzinger, perhaps, or you know, Mike Pence – he might have a chance with the big guy after all.

For Greitens, the new ad appears to be a step up from his prior ridiculous campaign ad, which in 2016 depicted him firing a machine gun in slow motion at a body of water. It was unclear at the time what beef Greitens might have had with that lake, though now it can be reasonably assumed that it disagreed with Greitens politically and therefore had to go.

Watch the video yourself below.

We are sick and tired of the Republicans in Name Only surrendering to Joe Biden & the radical Left.