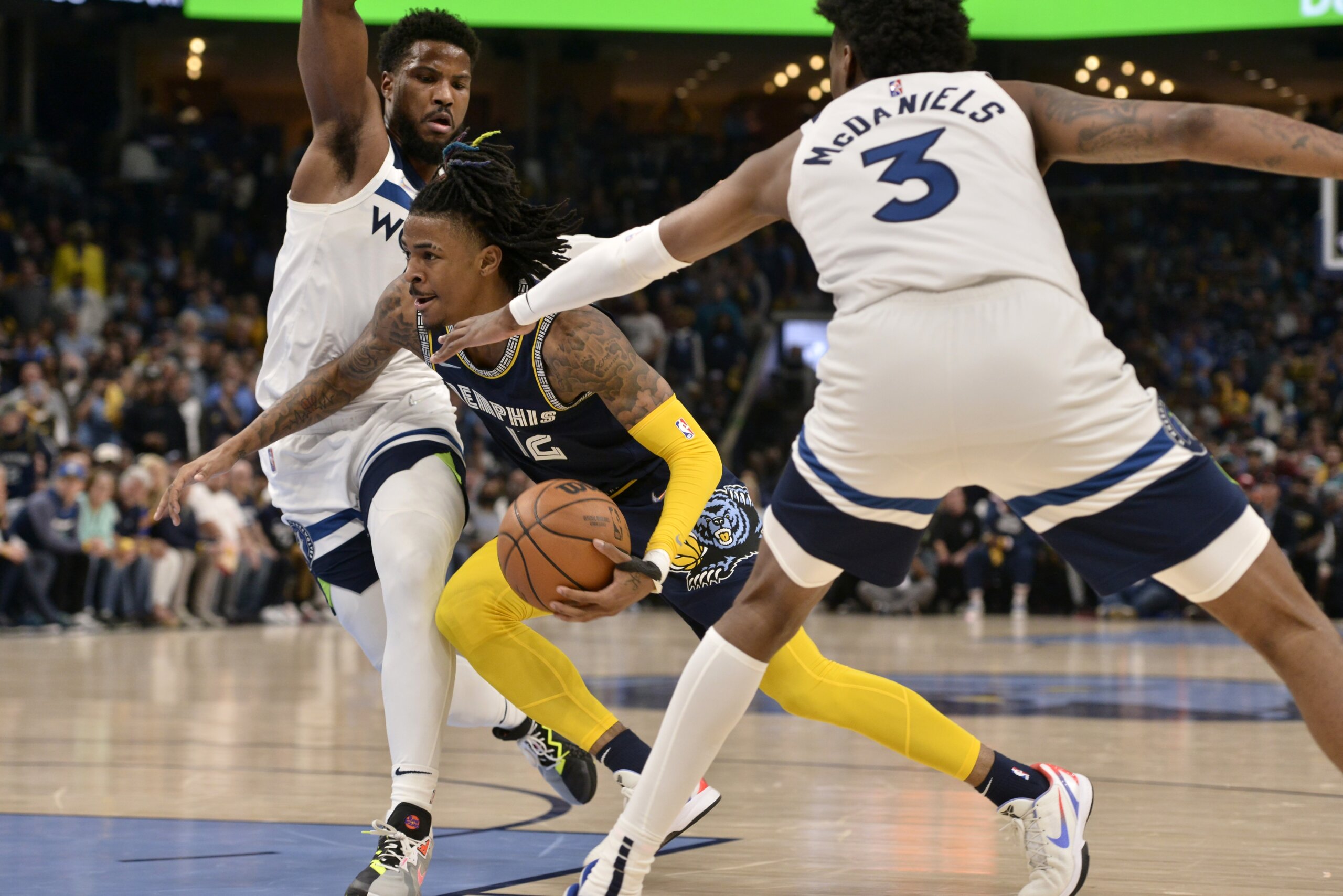 MEMPHIS, Tenn. (AP) – Ja Morant scored 23 points and handed out 10 assists as the Memphis Grizzlies looked much more like the team that posted the NBA’s second-best record, routing the Minnesota Timberwolves 124-96 on Tuesday night to even up their first-round Western Conference series at 1 apiece.

Morant went to the bench with 4:40 left to a huge ovation. He finished a rebound shy of a triple-double. Desmond Bane and Jaren Jackson Jr. each added 16 with Jackson hitting 4 of 7 from 3-point range as the Grizzlies finished with seven in double figures.

Game 3 is Thursday night in Minneapolis.

Anthony Edwards, who scored 36 points in his playoff debut in Game 1, led Minnesota with 20. All-Star center Karl-Anthony Towns had 15 points and 11 rebounds. Naz Reid and Taurean Prince had 12 each off the bench, and D’Angelo Russell added 11.

The Timberwolves dominated the series opener after scoring a franchise record of 41 points in the first quarter.

This time, officials stayed very busy calling 20 fouls in a very long first quarter. That kept the NBA’s top scoring teams in the regular season from getting into any rhythm as they combined to shoot 33 free throws.

At one point, Memphis had Steven Adams, Jackson, Clarke and Dillon Brooks on the bench with two fouls. That forced coach Taylor Jenkins to turn to Tillman who did not play in Game 1, and he turned in the best playoff game of his young career.

The Grizzlies grabbed their biggest lead of this short series at 30-23 on a floater by Jones with 2:11 left, and they led 33-32 after the first quarter when Morant’s long buzzer-beater attempt hit off the rim and off.

Memphis started running in the second and opened the quarter with an 11-2 run and finished on an 11-5 run for a 60-49 lead at halftime with Morant not scoring a point. Patrick Beverley summed up Minnesota’s struggles when his layup before the buzzer rolled off the rim.

Grizzlies: Entering the game had lost four of their last five games including the series opener. … Jackson, who matched his career high with seven blocks in the opener, had one Tuesday night. But he knocked down four 3s… D’Anthony Melton came in 8 of 26 from 3-point range. He was 2 of 6.… Adams played three minutes after picking up two early fouls. … They had 29 assists and now are 29-1 when they have at least 28 assists.

It did not take long in the game for things to get a bit chippy. Officials called a foul on Towns early, then on the same play got Patrick Beverley for a technical after a swipe at Morant’s head. Then Adams got called for a foul that was upgraded to a flagrant 1 after he smacked Jarred Vanderbilt across the face. And all that was in the first three minutes.

Game 3 is Thursday night in Minneapolis.