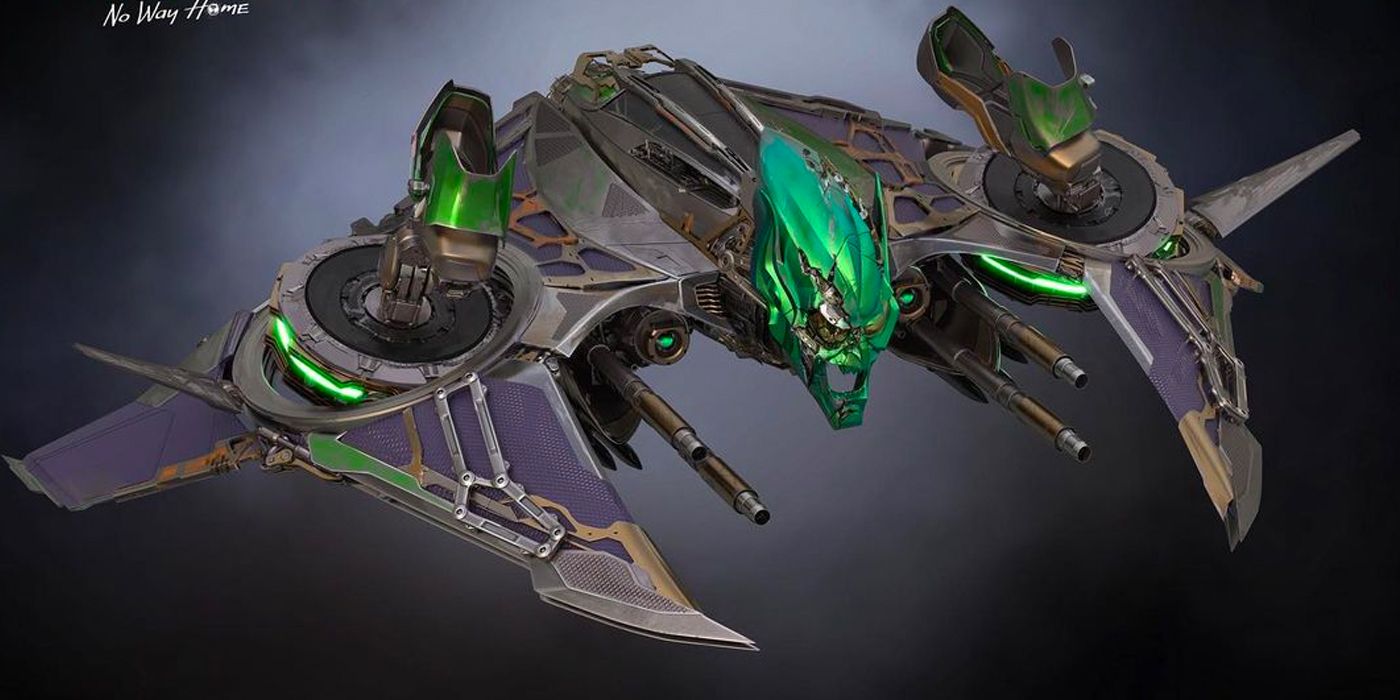 Artist Josh Nizzi has shared some of the concept art he did for various Marvel projects, including a Spider-Man: No Way Home image that displays a very different look for Green Goblin’s glider. The third installment into the MCU’s Spider-Man film series, No Way Home, pulled villains from across the multiverse into their universe after a spell goes wrong. This spell brought back some familiar faces including some of Sam Raimi’s Spider-Man characters; Sandman (Thomas Haden Church), Doctor Octopus (Alfred Molina), and the Green Goblin (Willem Dafoe).

No Way Home saw a confused and upset Norman Osborn being tormented by his Green Goblin side. When he first arrives on the new Earth, he desperately tries to distance himself from that aspect of his identity by smashing his mask and covering up his glider before abandoning them both. The Green Goblin’s infamous glider got an upgrade for No Way Home, with a dark metallic color and a heavy mechanical look. It also featured some bright green headlights as a nod to his iconic color scheme.

Related: The MCU Can Still Have Its Own Green Goblin (Despite Dafoe’s Perfection)

While Spider-Man: No Way Home was in development, Nizzi also had some alternate ideas for what the Green Goblin’s Glider could look like. As an early idea, the artist suggested adding the Goblin’s broken mask to the front as a tribute to his comic book appearance, which features the jagged outline of his face at the front. This design would have also had more prominent artillery, and the artist suggests that it was to be built using some Stark Technology like Mysterio did in Spider-Man: Far From Home. Although sad to see the design go unused, the artist ultimately believes they made the right choice. Check out the concept art below:

The Green Goblin’s Glider was not the only part of his costume that got a revamped look. While at the beginning of No Way Home DaFoe’s iconic Goblin suit is seen briefly, Osborn quickly covers it with a large purple hoodie and coat. In the film’s final battle, the suit appears much bulker, now decked out in new weaponry, with the shreds of Osborn’s purple jumper draped over his shoulders, mirroring the Green Goblin’s comic costume color palette.

With such a large and passionate fan base, it’s always going to be difficult to please everyone with the final product. The Green Goblin’s appearance has always been faced with criticism, which Dafoe believes is the reason it was so drastically changed for No Way Home. While there’s been little complaint about the new look with the success of No Way Home, it’s understandable that the artist was disappointed when this idea was scrapped. While the new look is generally well-liked, it’s easy to imagine this Stark Tech-infused design flying around in Spider-Man: No Way Home.

TV / Movie news writer based in Scotland. Always looking for new media to consume, and is obsessed with spoilers. Has way too many opinions on fictional characters. Ellisha began writing for Screen Rant in 2021.