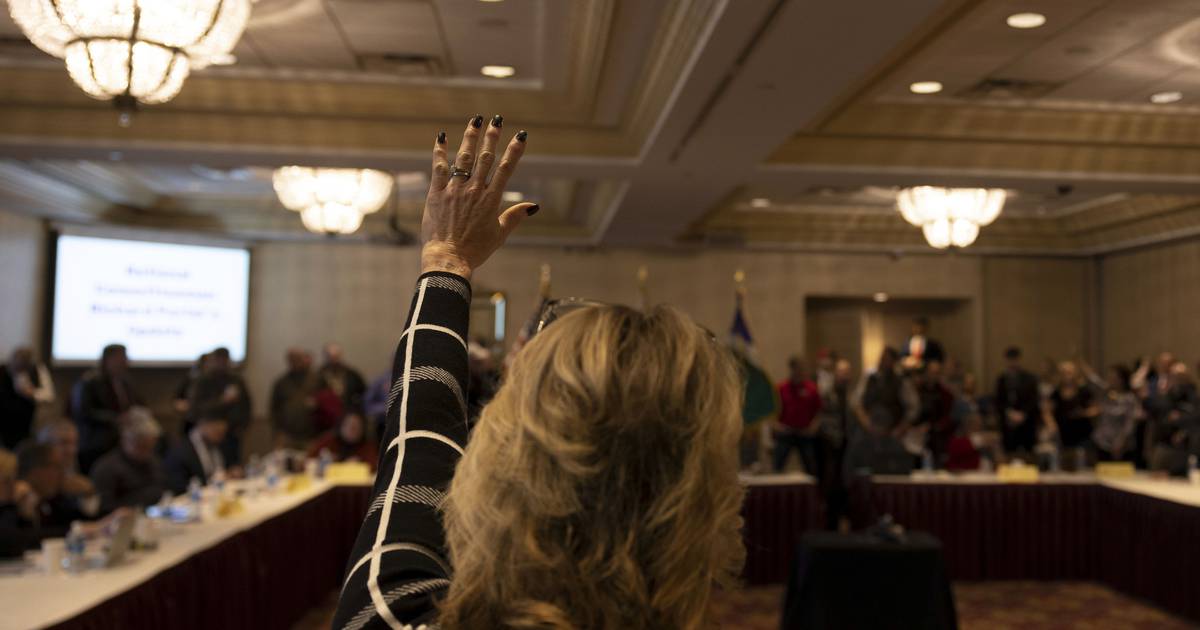 But after four hours and nearly 60 speakers, Illinois GOP Chairman Don Tracy survived a sometimes raucous Republican State Central Committee meeting at the Bolingbrook Golf Club to continue as head of the state party after contending some outside the state GOP were stirring dissent and seeking to challenge his leadership in order to try to boost their internet presence.

Still, he acknowledged after the meeting that many of those expressing their frustration at him had a voice that should be heard.

“These were people that worked hard and we are all very disappointed in the outcome of the election and this was an opportunity for them to share their concerns and their ideas and we’re here to listen to them,” Tracy said.

“I think a lot of them are fairly new and we want them to not go away with that first election loss and give up. We want them to keep working and working for the entire party and other campaigns and not just one,” he said.

As for continuing to lead the state Republicans as he has since February of last year, Tracy said, “I’m not going anywhere.”

Tracy acknowledged to the 17-member Republican governing body and the audience that “the election was a bitter pill to swallow” and it “hurts because we had such high hopes” only to see Democrats retain all statewide offices, extended their supermajorities in the state legislature and expand their advantage on the Illinois Supreme Court and in the state’s congressional delegation.

“However, honest post election analysis requires thoughtful consideration of our truths in order to move forward, not bad-faith attempts by online bloggers to try to gin up the place in order to profit off the frustration that we all feel,” Tracy said as some in the audience booed.

“This movement isn’t going away. It is just beginning,” Vargas said during his turn at the microphone in the public comment section of the meeting.

Vargas said, “We need change” after making unfounded claims that Democratic Gov. J.B. Pritzker was preparing a new pandemic mask mandate and would require children to be vaccinated for COVID-19 “and we don’t have enough Republicans in Springfield to stop him.”

Sign up for The Spin to get the top stories in politics delivered to your inbox weekday afternoons.

Also attending were party activists that included a man wearing a Donald Trump dummy on his shoulders, and Peggy Hubbard of Belleville, an internet provocateur who spreads conspiracy theories and who has twice been an unsuccessful GOP primary candidate for the U.S. Senate nomination.

“Mr. Tracy, if you’re not going to do your job, move out of the way and we will do it,” Hubbard said, refusing to relinquish the mic after her allotted 90 seconds had expired, saying, “I drove 397 miles.”

“If we don’t change what’s in this room right now and come together we are not going to make it in this party,” she said.

State GOP officials touted victories at the county level downstate, where communities have turned increasingly Republican in the absence of union manufacturing and coal mining jobs. The state party also said it had raised $2.2 million in the last cycle — a pittance to the tens of millions spent by billionaire Pritzker on Democratic activities — but more than double what the party raised in the previous two-year cycle.

Vince Kolber, a wealthy businessman who heads the state GOP’s finance committee, drew boos when he said of those who have not donated to the party, “I don’t know what the heck you’re doing here.” Kolber was promptly defended by Jeanne Ives, a state central committee member and former state lawmaker, who noted he contributed $750,000 to her failed primary challenge to one-term Republican Gov. Bruce Rauner in 2018.

But his comment drew a rebuke from DeVore, who contended Kolber’s remark was representative of a state GOP that ignored grassroots supporters who, rather than donate money, “worked their fingers to the bone to do what they believe in.”

“Mr. Tracy or anybody else in here, you’ve got to walk through this room and you’ve got to engage these people and they have to recognize you accepting respect for them,” DeVore said.

Republican National Committeeman Richard Porter drew the most audience criticism as he sought to focus on the need for post-election party unification and “respecting other perspectives” while calling for “no more RINO crap,” using the acronym Republican In Name Only, which conservatives use to attack moderates.

But several audience members accused the state GOP establishment of supporting Aurora Mayor Richard Irvin’s primary bid for governor over Bailey, in the process weakening or abandoning the eventual GOP nominee. Irvin’s bid was backed by $50 million from Ken Griffin, the CEO of the Citadel investment firm, but Irvin finished third, far behind Bailey. The state GOP did not endorse a candidate for governor.

“Irvin was a great Republican,” Porter said, to boos and shouts. “No he was not,” one woman shouted while a man yelled, “He’s a liberal.”

“Republicans come in many flavors,” Porter said, prompting a man to reply, “No. One-flavor Republicans,” while a woman yelled, “You guys quashed good candidates.”

Ultimately, Tracy said the GOP must re-focus its efforts to trying to regain political control of the suburbs, which were the basis for Republican statewide successes from the 1970s to the 1990s but have trended Democratic in more recent years.

“The collar counties and suburban Cook County are drifting further and further away from the Republican Party,” Tracy said. “In order to win statewide again, we have got to reverse this trend and start winning again in the suburbs. That will be a primary focus of the state party.”