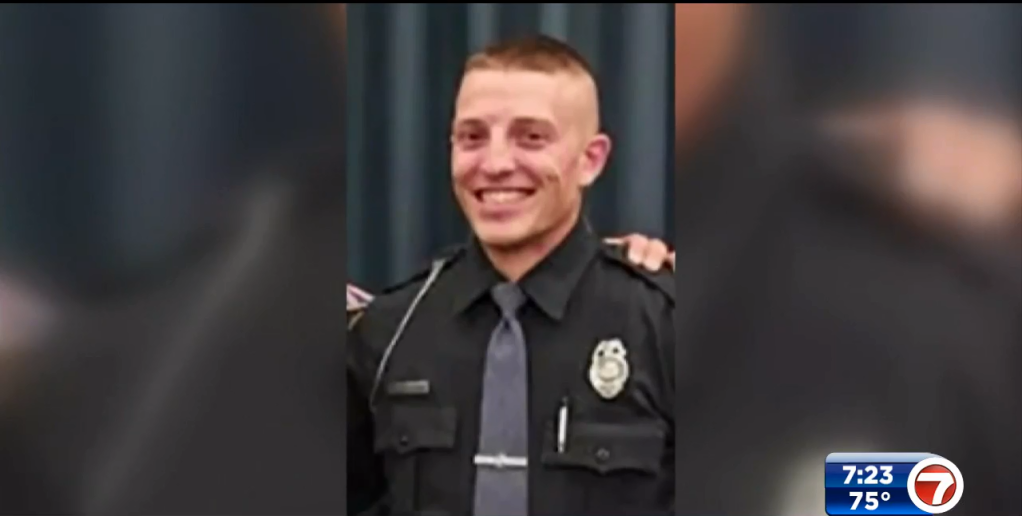 (CNN) – A police officer was charged Thursday with one count of second-degree murder in the killing of Patrick Lyoya, who was shot in the back of the head during a struggle after an April traffic stop, a Michigan prosecutor said.

Lyoya, a Black man, was shot to death on April 4 by Christopher Schurr, a White Grand Rapids police officer trying to arrest him after a traffic stop in a case that has drawn national attention. Lyoya’s final moments were captured in multiple videos later released to the public.

“This is not a message. This is just based on the facts and making a decision in this case, ”Kent County Prosecuting Attorney Christopher Becker told reporters Thursday, referring to the charge.

Grand Rapids Police Department Chief Eric Winstrom, who spoke with other city officials at a news conference later Thursday, said he was recommending to the city Schurr’s suspension without pay, pending termination. The officer will have a discharge hearing, and the final determination on his employment will be made by the city manager.

Becker said he had spoken with Lyoya’s family and had sent them a letter in their native Swahili.

Peter Lyoya, Patrick’s father, said Thursday that the charge brings some relief to the family, even though his son is never coming back.

“My heart was really broken during the past two months because a lot of things were said,” he told reporters at a news conference through an interpreter. “And I was thinking maybe there’s no justice in America.”

He added that if it were not for the videos that showed the world his son’s final moments, they would not be here today.

“Patrick is not coming back. We are not going to see him again, ”Peter Lyoya said. “And to show this point that the police officer will be charged, and is charged, that brings a little bit of consolation to our family because we see everybody that supports us, everybody who stands by us, they did a good job to get this kind of justice. ”

Ben Crump, an attorney for the Lyoya family, in a statement called the decision to file charges “a step in the right direction.”

“We are encouraged by attorney Christopher Becker’s decision to charge Christopher Schurr for the brutal killing of Patrick Lyoya, which we all witnessed when the video footage was released to the public,” Crump said.

“Officer Schurr,” he added, “must be held accountable for his decision to pursue an unarmed Patrick, ultimately shooting him in the back of the head and killing him – for nothing more than a traffic stop.”

In a statement, Michigan Attorney General Dana Nessel commended Becker and the state police for “the exhaustive review conducted these last two months.”

“We must now respect the judicial process and allow the facts of the case to be presented in court,” he added.

Cle J. Jackson, president of the Greater Grand Rapids NAACP, said the prosecutor’s decision to charge the officer was unexpected.

“We hope that all involved in this next phase will be unbiased and, ultimately, Officer Christopher Schurr will be convicted for his heinous actions,” Jackson said.

‘We have a lot of work to do,’ mayor says

Mayor Rosalynn Bliss on Thursday said the city is committed to “long term systemic changes that create a safer and a better community for everyone.”

“I understand that this is painful and that many people throughout our community have been deeply impacted by this tragedy,” she said. “Today’s announcement is an important step in the process of accountability and justice. And as we move forward, we have a lot of work to do. ”

Winstrom, who took over as chief in March, said he was comfortable with the decision to seek the officer’s termination.

“I recognize the impact this will have on a longtime employee and a friend to many at the Grand Rapids Police Department, but I think it is the right thing to do,” he said.

CNN has reached out to the police union for comment.

Becker said Schurr has turned himself in. A Kent County judge signed an arrest warrant for Schurr on Thursday. Schurr is to be arraigned Friday afternoon.

Becker, responding to a question about the timing of the criminal charge, said he received the final investigative report from the state police about eight days ago. The hold up was due in part to the wait for a forensic report from the company that made the Taser used in the encounter.

“Things take time, and I want to be, obviously, thorough. This is a major decision, ”he said.

Becker stressed that prosecutors are not a branch of the police department. “We work a lot with them, but we do not work for them,” he said.

Schurr placed on leave and suspended after shooting

In May, Becker announced he was seeking guidance from outside experts before deciding whether to charge the officer. The city of Grand Rapids placed the officer on paid leave and suspended his police powers after the shooting.

Lyoya, 26, was pulled over by Schurr for an allegedly unregistered license plate. Lyoya got out of the car and ran. He resisted Schurr’s attempt to arrest him, and the officer shot him while the two were on the ground as Schurr wrestled for control of Lyoya.

Lyoya had three outstanding warrants at the time he fled Schurr, and an autopsy revealed his blood-alcohol concentration was more than three times the legal limit.

The death led to protests in Grand Rapids, where other interactions between police and residents drew media scrutiny in a city with a history of tension between Black residents and police.

The shooting led the state’s civil rights agency to renew a request for a pattern-and-practice investigation by the Justice Department into the Grand Rapids Police Department, just one month after a new police chief took office.

The county’s medical examiner’s office released its autopsy results in early May, and the Grand Rapids Police Department released dispatch records and reports written by officers who responded to the shooting in late April.

The radio traffic, an accompanying computer-aided dispatch log and redacted incident reports shed some light on the moments before and after the officer shot Lyoya.

Radio traffic and other records released by the Grand Rapids Police Department show that Schurr told supervisors after the shooting that Lyoya “has my Taser.”

It’s not clear if Schurr knew of the warrants or the revoked license at the time Lyoya fled.

Lyoya fled on foot shortly after the stop. Records show he was wanted in connection with a domestic violence case from April, charged as a second offense. Another warrant was issued in early April for failure to appear or pay. Another open warrant appeared in the court record relating to a property damage traffic crash Lyoya’s alleged to have fled. His family’s attorneys declined to comment on the open warrants.