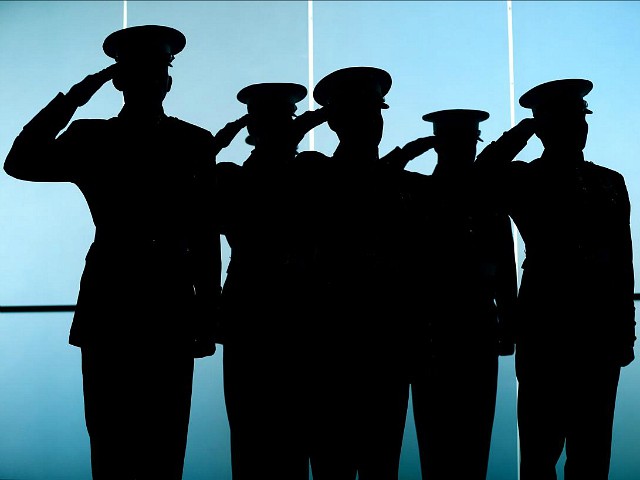 A growing number of Republican lawmakers are seeking to prevent military discharges for tens of thousands of service members not complying with the Biden administration’s coronavirus vaccine mandate – which could become a reality if Republicans retake Congress this fall.

Rep. Brian Mast (R-FL) (C) gives members of the National Guard a tour of the US Capitol on January 13, 2021 in Washington, DC. (Stefani Reynolds / Getty Images)

House Armed Services Committee members Rep. Jim Banks (R-IN), chairman of the Republican Study Committee and a Navy reservist, recently queried Pentagon leaders on the effects of the discharges. Rep. Matt Gaetz (R-FL) recently called for a review of how the mandate has affected military readiness.

“It’s my belief, though I would never want to prejudge any outcome, that driving people out of the military does not make our military stronger, it makes our military weaker,” Gaetz said on his podcast Firebrand last week, where he spoke to three active duty service members who spoke out against the mandate.

Gaetz, a member of the Armed Services Committee, said he also plans to introduce legislation to ban any mandate for experimental vaccines and to restore to rank and pay anyone who was coerced to leave the military over the mandate.

These proposals could become a reality if Republicans take control of the House and Senate this November, which they have a chance of doing, according to recent polls showing that Republicans have an advantage over Democrats.

Former President Donald Trump has also called for the reinstatement of troops discharged over the vaccine, with back pay.

So far, the military has expelled more than 3,400 service members from the military over the mandate put into place by Defense Secretary Lloyd Austin in August, according to the Military Times. Austin and Chairman of the Joint Chiefs of Staff Army Gen. Mark Milley has shown no signs of rescinding the mandate.

That number includes at least 1,787 Marines, at least 793 sailors, at least 351 active duty airmen and Guardians, and at least 505 soldiers, according to the most current statistics provided by each service.

More than 24,000 service members have applied for exemptions from the vaccine mandate on religious grounds, according to Liberty Counsel, a non-profit Christian ministry that has filed lawsuits defending service members.

Liberty Counsel recently filed a memo urging a federal judge to issue a class-wide preliminary injunction that would stop, at least temporarily, the military from discharging service members over not complying with the mandate.

ASAP, Your Honor. Today, we filed a memo urging the court to issue a class-wide preliminary injunction in Navy SEAL 1 v. Austin for all service members in every branch of the military. Over 24,000 service members would benefit from the injunction. https://t.co/2zPkWrrEZL

Liberty Counsel founder and chairman Mat Staver told Breitbart News in a phone interview on Monday that some service members are self-admitting to the emergency room due to the stress they are facing over the mandate, and some are even committing suicide.

“This incredible pressure and abuse that’s being foisted and put on these individuals is causing a lot of stress and has even put some people in the position of self-harm,” Staver said.

“This past year, the policies in place have led to me being personally targeted and discriminated against. I pray to my Lord and Savior Jesus Christ that the military can reverse the mandate and respect my religious and moral beliefs as well as my legitimate health concerns, ”she said in a video, along with five other Marine pilots who oppose the mandate.

The three service members who spoke with Gaetz also talked about the impact the mandate is having on the force.

“There is an unbelievable amount of retaliation happening. I recently was – had some of my charts in Alaska opened up to see if I was guilty of malpractice, ”he said. “They’ve claimed that I’m guilty of malpractice. And now they have also suspended me and put a hit against my license, which will go to Texas. ”

Air Force Capt. Jordan Karr said service members have been coerced into getting the vaccine. “Once the mandates were implemented across the DOD, we started to see the coercion, the abuse happening across services,” she said.

Air Force Master Sgt. Nick Upper said a lot of service members who do not want to take the vaccine feel alone and scared. “I have honestly been extremely fearful with the steep rise in suicides. I’ve seen across the DOD that some of these members may take their lives waiting for the duty to do the right thing, which it may never do, ”he said.