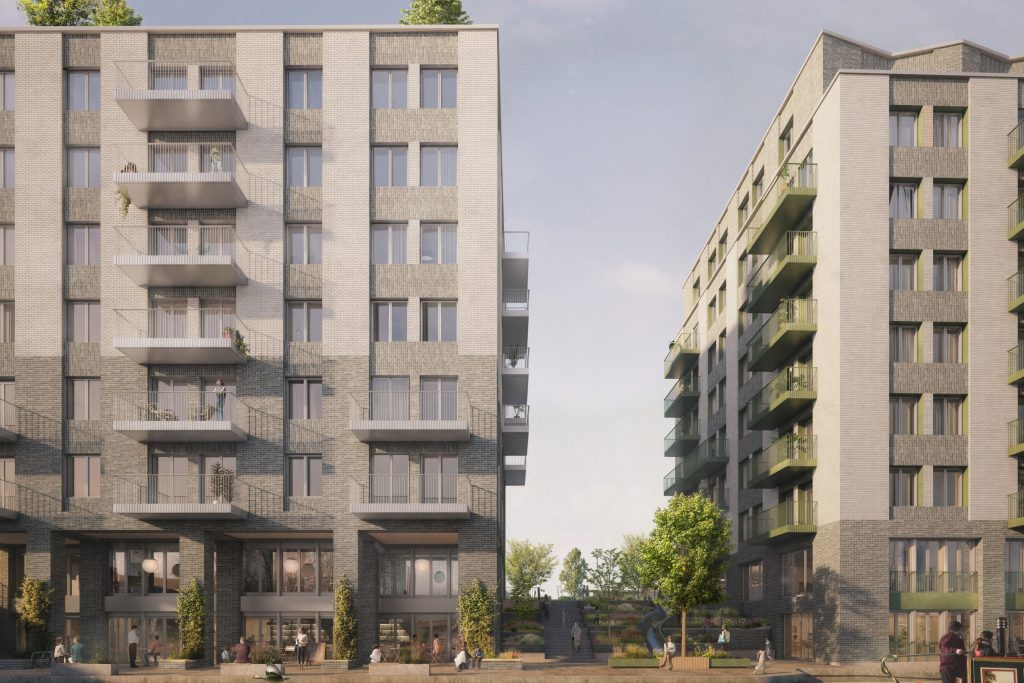 The three-year-old practice has applied for permission from the Old Oak and Park Royal Development Corporation (ODPC), the local planning authority for a 650ha regeneration site, which spans three boroughs in west London.

Its £ 40 million Miter Wharf scheme for developer London Green would be on the eastern tip of the site on a 0.33ha plot north of Wormwood Scrubs. It comprises two blocks – of eight and nine storeys – with 833m² of commercial space on the ground and lower-ground floors below a mix of one, two and three-bedroom flats.

The site, which has a 140m frontage to the Grand Union Canal, is currently used by a tire supplier and fitters and the application includes the demolition of existing structures.

Practice director Giles Heather said: ‘Our proposals for Miter Wharf will transform a key site of the OPDC development area at the confluence of Scrubs Lane, rail infrastructure and the Grand Union Canal. It aims to set a benchmark for urban design, integrate with the canalside landscape and cultivate a real neighborhood around it.

‘The architecture is restrained and well-proportioned, deploying gray and white brickwork lifted by painted metal balconies. The two residential blocks are grouped around a playful landscape, where people can while away time, or even take a slide down to the canalside. ‘

These latest plans follow a pre-application proposal by Heather’s former employer Squire & Partners in 2016, which featured three stepped blocks of 31, seven and five stores providing 118 homes. That was then revised following liaison with the ODPC to two blocks, one of five storeys and another rising from six to nine storeys in three increments.

Goldstein Heather hopes that its application will be considered by the ODPC planning committee in September. If approved, work would start on site early next year.

The practice is one of 50 architecture firms currently working with the ODPC, according to Eleanor Fawcett, the corporation’s head of design. The corporation is overseeing the creation of 25,500 homes.

Speaking at an AJ100 lunch last month, Fawcett said the ODPC would be recruiting more practices to help design the new town center at Old Oak, which is to have an HS2 station open in 2030.

‘At the moment we are thinking about whether we can do competitions, or what is the right way of getting architects to take the lead on projects we will be promoting,’ she said.