At a public event last weekend, German finance minister Christian Lindner was asked why he was ending one of the government’s most popular policies — a €9-a-month ticket for local trains and other public transport that has proved a massive hit with voters.

A young man who said he had used it to travel more than 11,500km across Germany asked why Lindner’s liberals were blocking an extension to the three-month scheme. “You traveled 11,000km for €27?” Lindner replied. “That’s just not sustainable.”

The cheap ticket scheme was part of a €30bn package of relief measures unveiled by chancellor Olaf Scholz in the wake of Russia’s invasion of Ukraine. It was designed to kill two birds with one stone — soften the blow of soaring inflation and a looming cost of living crisis while tackling climate change by encouraging people to switch away from cars.

Other countries have made similar moves. In Spain, travel across parts of the state-owned Renfe rail network will be free from September 1 until the end of the year. Austria has operated a “climate ticket” since November that costs €1,095 a year and covers rail, metro and bus networks in cities — and everywhere in between.

Some 30mn people have taken up the German offer, more than a third of the population, and Scholz has described it as “one of the best ideas we’ve ever had”.

Marion Jungbluth, a travel expert at the VZBV consumer association, said the “enthusiasm people have shown for it is absolutely unprecedented”.

Germany was renowned for the fiendish complexity of its ticketing machines and ticket pricing structures, which vary wildly from region to region, she explained, but the €9 ticket did away with that. “So many people took up the offer because it was so easy to buy,” she said.

However, its success put Scholz’s government in a quandary. The scheme, which cost Berlin €2.5bn, was only supposed to run from June 1 to the end of August, but it has proved so popular that Germans might struggle to revert to normal ticket prices once it has expired. Many are now demanding a reprieve.

Lindner, leader of the pro-business Free Democrats, who are part of Scholz’s three-party coalition, is strictly opposed. He told the man at the public event last week that it would cost €14bn to operate the scheme for a whole year — money that would be much better spent on “modernising Germany’s crumbling rail network and expanding capacity”.

Pascal Meiser, an MP for the hard-left Linke party, said this view ignored polling data indicating huge support for the policy. “It’s remarkable how reliably Lindner manages to misjudge the mood in the country,” he told Der Spiegel.

Others question whether it has been as successful as some claim. Lars Feld, a University of Freiburg economics professor who advises Lindner, said it had led to “overcrowded trains that caused delays and impacted the long-distance rail network”.

Feld said it was clear more people were using public transport “but it was almost exclusively additional demand — there was no shift in traffic from road to rail”.

“So environmental goals were not achieved,” he said.

Others dispute that. “Initial data showed that in some towns there were fewer traffic jams while the scheme was in effect,” said Stefan Gelbhaar, the Green party’s transport spokesman. “When the offer and the price are right, people do actually switch to public transport.”

Indeed, a poll cited by Deutsche Bahn, the state-owned German railway operator, showed that a fifth of those who bought the cut-price ticket had never used buses, trains and trams before.

The scheme also helped to combat inflation, which the Bundesbank has said could reach 10 per cent by the autumn. “Our calculations show it reduced the inflation rate by 0.7 percentage points,” said Sebastian Dullien, research director at the Macroeconomic Policy Institute of the Hans Böckler Foundation.

It has also given relief to hard-pressed households. “A family of four in Hamburg where the parents take the metro to work and the children ride the bus to school are saving really quite a lot of money,” Dullien said. For that reason, he argued, it should be extended “till next summer, or at least until energy prices start to come down”. 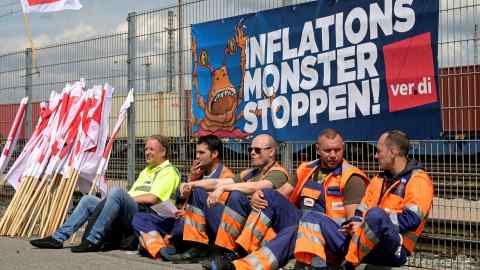 Others agree. The Association of German Transport Companies has proposed replacing it with a €69-per-month ticket, again valid for the whole country. The Greens, who are also part of Scholz’s coalition, favor a two-tier model, with a €29 ticket for regional travel and a €49 version for travel across Germany.

Politicians are coming up with creative solutions for financing an extension. Lars Klingbeil, leader of Scholz’s Social Democrats, told ZDF TV that he wanted to see a tax on windfall profits to pay for a successor to the €9 ticket — “just like the one in Spain”. Lindner has rejected that idea.

Demands for a continuation are in part fueled by fears that ticket prices will shoot up as soon as the €9 ticket scheme ends.

“Some transport companies have announced they will have to raise prices before the end of the year,” said Jungbluth. “If that happens, all that’s been achieved with the €9 ticket would just be destroyed.”