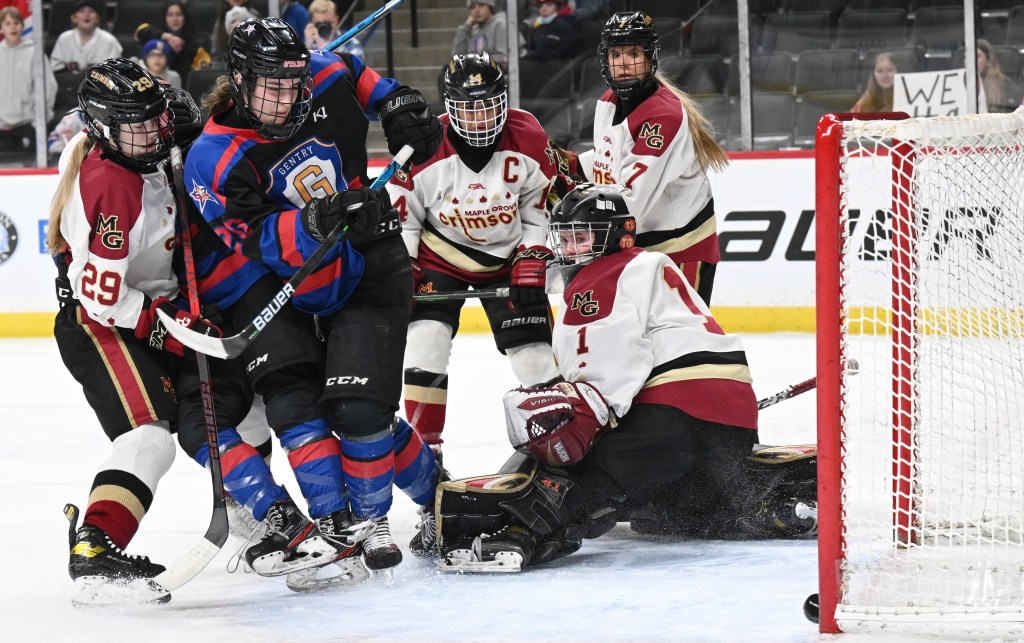 “Do your job, crash the net and get rebounds, and stay out of the penalty box.”

Although they were not perfect, the Stars were effective, carving out a 2-1 win over the Crimson in a game that was tight from beginning to end.

Gentry junior forward Campbell Heger scored a power-play goal at 12:39 of the third period to break a 1-1 tie, and the Stars held on to improve their record to 23-6.

“We’re a pretty disciplined team,” Stars defenseman Jenessa Gazdik said. “We stick to what we’ve been doing all year, and that’s what helped us at the end.”

“We really came together after the second period,” Heger said. “We sat down in the locker room and focused up. Honestly, I think we just wanted it more. It was a great team win. ”

As for her game-winning goal, she said, “I saw the clear lane, and I just knew from there that we wanted it more.”

Maple Grove went on a power play four minutes into the third period, but the best scoring chance in the ensuing two minutes came when Gentry Academy’s Cara Sajevic was stopped on partial breakaway.

The Stars went on a power play soon after but couldn’t score despite putting some pressure on the Maple Grove goal.

When the Stars got a second few minutes later, they knew it was their time to shine.

“We have a lot of faith in both of our (power play) units,” Jahnke said, “so it was a great opportunity for us to take some of the momentum back.”

The teams split a pair of games during the regular season, with Gentry winning 4-1 on Dec. 9 and Maple Grove winning 3-1 on January 6. So it was no surprise that it was a tight game.

The teams entered the third period tied 1-1. Stella Retrum gave Maple Grove a 1-0 lead at 6:50 of the second period when she beat Stars goaltender Zoe Laming on a rebound.

The Stars pulled even six minutes later when Gazdik drove the net and scored on her own rebound.

“Credit to them, they put up a really tough battle,” Jahnke said. “In the end it was just a matter of will. In the game of hockey there’s always momentum. And whether we had the momentum or not, we just need to make sure we are continuing to do our systems. ”