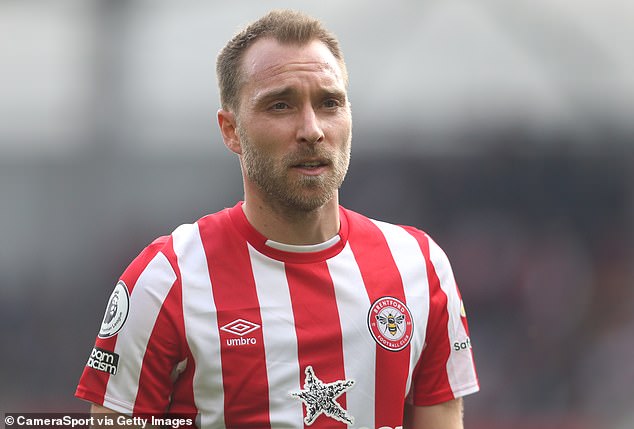 ‘Every penny has to go back into the club until it becomes attractive again’: Gary Neville takes another swipe at the Glazers for turning Manchester United into a ‘GRAVEYARD’ as the club find themselves competing with Brentford to sign Christian Eriksen

By Olly Allen For Mailonline

Gary Neville has launched another furious attack on the Glazer family as Manchester United battle to sign Christian Eriksen.

The Danish midfielder is out of contract at current club Brentford, with both the Bees and United making him offers for next season.

According to Sky Sports, both proposals are ‘appealing’, but the Red Devils’ is believed to be ‘more financially lucrative’. However, Eriksen is said to be happy in London and unsure about relocating.

It appears that Neville thinks it is shameful that a club like Brentford could have the chance to beat United to the signing of an elite player.

The United legend believes it shows how the Glazer family have made Old Trafford an unattractive prospect to targets and it is ‘demoralizing’ to see them take £ 11million out of the club in dividends when investment is needed.

‘That’s why Dividends have to stop for a period,’ Neville wrote on Twitter on Friday morning as he shared a picture of Sky Sports’ latest report on Eriksen. ‘Every penny has to go back into the club until it becomes attractive again.

‘The club has become a graveyard for players. Culturally for owners to take [money] out of a poorly performing business is demoralizing! ‘

Earlier this week, Neville said ‘it’s not right’ that the Glazers are earning such a significant payout when the team, training ground and stadium are in desperate need of investment.

United were once considered the dream destination for many players as they were involved in the race for the league title nearly every year.

In 2008, when the Red Devils won the Premier League and Champions League, Brentford finished 14th in League Two.

However, the two clubs finished just 12 points apart in the Premier League last season – Brentford’s first campaign in the top flight in 74 years.

Eriksen proved to be a superb signing for the Bees in January as he made his return to football after suffering a cardiac arrest at Euro 2020 seven months previously.

The 30-year-old showed his class with a number of impressive displays that helped the team pull away from the relegation zone. He provided one goal and four assists in 11 appearances.